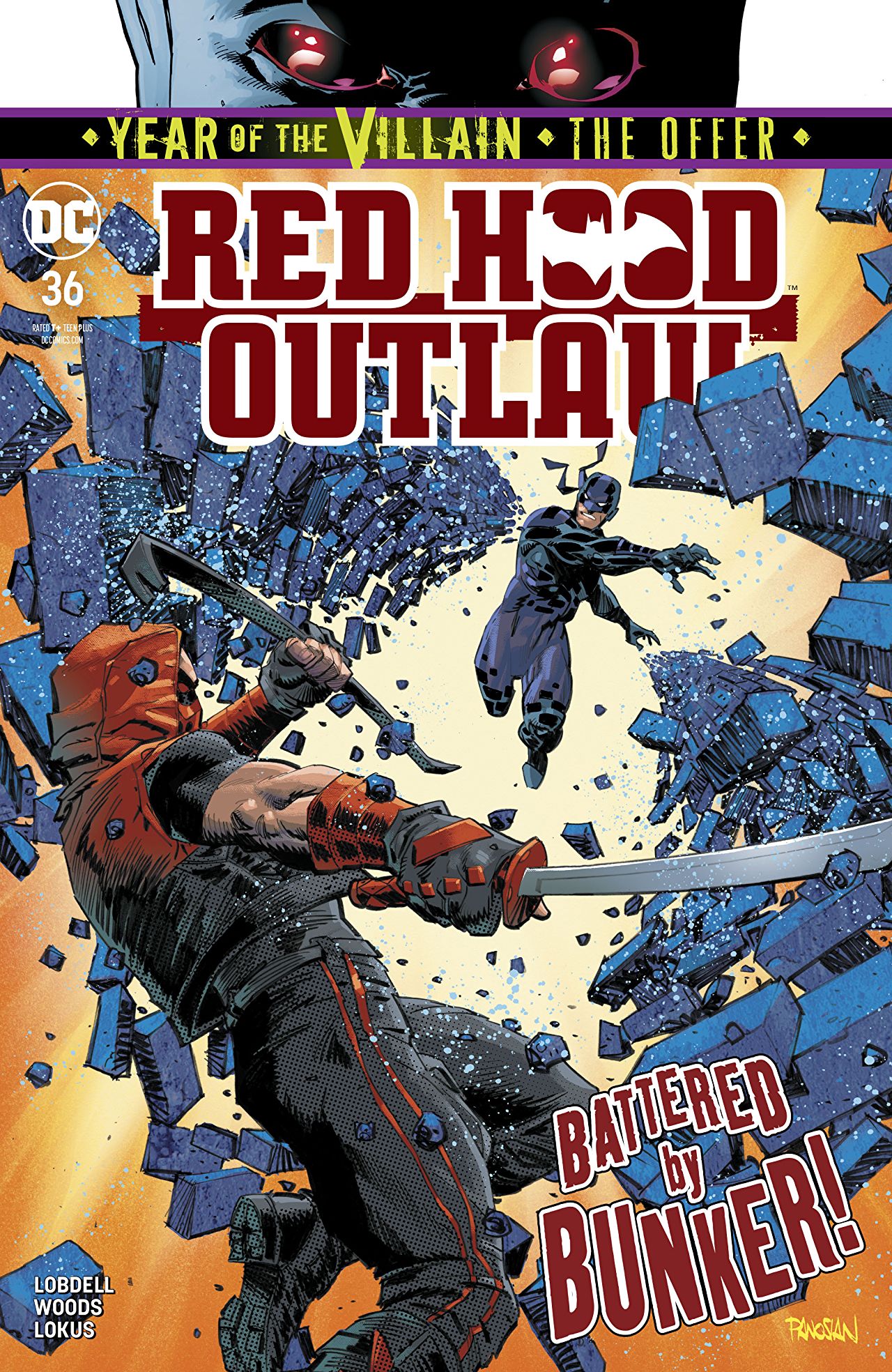 Overview: DC editorials give Lobdell a fast one.

Synopsis (spoilers ahead): This issue is all about wrapping everything up. The first six pages are just the story wrapping up Jason’s conflict with Penguin, retconning the previous fight so that Penguin has amnesia of the attack, not knowing who Jason really is. Cleaning up any issues that could alter the status quo, which could have led to some interesting stories where Penguin suddenly learns Jason’s identity, and by proxy, who Bruce Wayne is. He even, for some reason, assumes Jason himself is just a stooge working for Red Hood, even though there’s no indication that they are separate people. Everything is clearly happening the way it is to clean up any possible threads that could be leftover.

Then the story goes about tearing up all of Jason’s new connections, all the while Artemis and Bizarro are still nowhere to be seen after their random dimensional problem. Bunker attacks Jason because he found out Jason had been holding Penguin hostage (even though that had to be pretty obvious, he was there when they took the place right?). He makes some critical remarks of Jason that are meant to feel deep and contemplative. “Is Jason just as bad as Penguin?”

Jason then gives Suzie Su the Iceberg Lounge and runs away with Wingman. He makes comments about how even Penguin surviving the gunshot was planned and that everything was premeditative. All of this only to just ditch Wingman in the middle of the ocean, swimming off to new adventures by himself. Nothing was out of his control, deflating any tension the story had been developing.

Finally, Jason temporarily ends his short-lived romance with Isabel and gives her a dog to make up for it. The story ends with Lex Luthor recruiting Jason for some mysterious purpose, leading the story into the Year of the Villain story-arc.

Analysis: This issue is the best example of what a publisher-mandated edit looks like. It is very clear that Lobdell had his own story he had plans to write, and I retract my criticism of the previous issue. The weird misdirection and rushed pacing was very obviously Lobdell being given a notice that his story was going to come to an end very soon and he needed to wrap up all the loose ends in his plot. Because of this, it’s very hard to give a critical look at this issue, but it’s my job, so I’ll still do it.

First, I don’t like that Penguin has amnesia or that Jason planned for him to survive with amnesia. A big reason I stuck with this story and was fine that Jason had tried to kill Penguin, was that it shook up the continuity. Suddenly Penguin knew who Jason Todd was? This could break everything Bruce had built, all with one incredibly emotionally driven action. It also makes no sense how you could plan not only for Penguin to survive but also to suddenly forget everything. The amount of surgical precision needed would be impossible to make with a bullet.

It makes no sense that Jason planned to have this happen since he only returned to Gotham in the first place because Wingman chased after him (a character we still know nothing about by the way). In fact, the rushed nature of the previous story arc is now beginning to make sense too. It wouldn’t be far off to believe that Lobdell had a much larger story planned for both that story arc and this one, but was given a memo to hurry everything up. No longer getting a chance to explore everything he wanted to.

The art is standard. Nothing new. Nothing in the writing really stands out besides the billions of hoops Lobdell is jumping through to clean up every possible plot hole left in the wake of this. Hopefully, Year of the Villain is worth it, because I was really liking the story before all this came to be.

Final Thoughts: As much as I complain that DC doesn’t have enough editorial oversight, if this is what it means for DC’s editors to start making shots again, maybe we should go back to yesteryear and have writers doing whatever they want without any oversight.