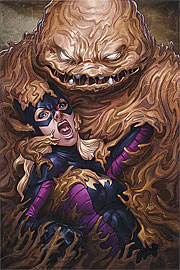 With the events of 'The Flood' firmly behind her, Stephanie Brown has most certainly grown – both as a young woman and, just as importantly, as a member of the Batgirl 'team'.

Our story – appropriately entitled 'Trust' – begins with Stephanie, sweat dripping from her brow, facing her opponent who in turn stares back and throws down a verbal challenge. Moment later, it's game on as Steph lets loose a tremendous shot … much to the surprise of her opposite number.

We're at Gotham U, it's the second half of the academic year and Stephanie is playing table tennis with Padma, a fellow student – and she's winning. It's Tuesday, the one day a week when Steph doesn't have any classes, and we get the impression that she usually – maybe always – wins at table tennis!

Just as the contest looks like it might be getting out of hand Stephanie's phone rings and, excusing herself from the game, she answers her caller Oracle with a cheeky greeting only to be instantly reminded that – again – it's not Oracle on the line but her new handler Wendy 'Proxy' Harris. Moving past this awkward exchange Wendy advises Steph that the police have trapped a man who's suspected of killing his wife and she believes that they could use a hand.

Across the city in the Gotham financial district the police, led by Detective Nick Gage, have their prey – a Mr. Griswald – trapped inside his mini van. Attempting to talk their target out of the van and into custody the officers come under fire and as the situation escalates the SWAT team announce that they're taking over. As they rush the van, Griswald launches a petrol can into the air which turns into a blanket of flames under fire. Amid the confusion Gage spots Griswald running from the scene and sets off in pursuit.

Never more than a few steps behind Gage tries to talk Griswald around but he'll have none of it – eventually coming face to face on a roof-top Gage pulls his gun as his target challenges him that he couldn't possibly know what it feels like to lose a wife, could he?

As rage gets the better of him Griswald explodes … into a torrent of clay and sends Gage flying off the building top and plummeting to the ground. As he mumbles what may be his final words he surprisingly receives help: Stephanie – Batgirl – swoops in and grabs him and the pair safely make their way to the alleyway below.

After a flirtatious exchange with Gage, Batgirl takes her leave as Wendy reveals that she has located Griswald – Clayface of course – entering Gotham Bank & Trust through a roof-top service unit. Following him into the building Batgirl makes her way through a maze of ventilation shafts before finding herself with a view of the banks main floor, filled with customers, tellers and security guards.

Sneaking behind the service desk Steph activates the banks security measures and locks down the building. Believing that she is attempting to rob the bank the security guards rush at Steph and as they draw their weapons she unleashes a couple of 'gooperangs' that disable the guards allowing her the opportunity to explain that she's trying to help, not trying to rob the bank.

One of the tellers replies that she ought to speak with the banks manager Mrs. Griswald who, in the event of a robbery, is required to make her way to safety in the vault.

Did he say Mrs. Griswald?

Moments later, at the entrance to the vault, Mrs. Griswald realizes that she is just moments away from achieving her objective as Batgirl challenges her – 'Clayface!'. Turning and changing from human form Clayface targets Steph who only just manages to leap to safety. Responding with batarangs Stephanie is momentarily overwhelmed by the shear size and power of her opponent. Swept up by a column of clay Steph finds herself transported back to the banks main floor and, as Detective Gage looks on Batgirl fights … Batgirl.

'You have got to be freakin' kiddin' me'.

Turning to Gage, Batgirl – one of the Batgirls – orders him to shoot her. Gage takes aim and fires … on the 'other' Batgirl and as the bullet pierces her costume she 'bleeds' clay. As the detective continues to fire Clayface begins to take his more familiar form and Stephanie lets lose with the contents of her utility belt.

Out of ideas Steph turns to Wendy for advice – 'use your surroundings' she's told. With water pouring from the banks sprinkler system Batgirl lets fire with a freeze-batarang – and Clayface is frozen, overcome and neutralized.

With Clayface on his way to Arkham Asylum, Batgirl and Nick get to the bottom of why he targeted this particular bank: it seems that the vault contained a picture of himself – Basil Karlo – and his wife, his dead wife that he wanted to look at.

As Batgirl questions Clayface's actions – Detective Gage seems frozen by the moment, turns and walks off down the street … alone.

The first issue of the second year of Stephanie Brown's Batgirl certainly didn't disappoint – the writing, the interior and cover art were great, everything I look for from a comic book, and then some.

The issue felt as if it was set a little time after the events of The Flood story-arc as Stephanie appears to be settling quite nicely into her multi-faceted life: daughter, student, Batgirl … and by the same token Wendy Harris seems to be getting to grips with her role as Proxy – but not without one or two enjoyable 'what do I do next?' moments.

Following the events that saw The Flood conclude – which as I said at the time felt like something of an anniversary or 'coming of age' issue for Steph and, to a lesser extent Wendy – I was curious how Bryan Q. Miller would choose to progress the immediate story and with his 'some time later' approach, for me, Mr. Miller really hit the mark.

I liked the sense that Stephanie and Wendy had developed their relationship – that both women were becoming more and more comfortable and confident in their roles while at the same time not being afraid to ask the other for help. One of my favorite moments in the whole book was when, having frozen Clayface Batgirl suggests to Proxy that she sends someone to clean up … as Wendy frantically thumbs through the pages of a phone directory!

The scenes that opened the book – set in a recreation room at Gotham U. – were particularly timely I thought: it was nice to see the spotlight return to Stephanie as student as much as Stephanie as Batgirl. After the heavy(ish) events of Steph's encounter with Calculator it was good to start this issue on an altogether lighter note.

Clayface isn't one of my favorite DC characters I have to say but I thought this story portrayed him in a much more personal and human way than many that I've read – I was actually quite touched by the thought that his actions were motivated by a burning desire to see his wife – albeit a photograph of his wife – one more time.

Throughout the Batgirl series so far one of the recurring themes has been friendly, and at times not so friendly, 'banter' – Steph and Damian, Barbara and Steph, Wendy and Barbara, Steph and Barbara and Nick Gage – and this issue was no different. I found the exchanges between Batgirl and Detective Gage really very charming with their clumsy puns, Steph's endearing thoughts – 'please be less attractive', 'squee' – and Gage's comments that 'for whatever reason' he trusts her.

While the tone of this title has always been light it's never lacked the ability to stimulate my thoughts and as I reached the last page I found myself intrigued by Detective Gage's story – as he fell from the roof-top early in the book we heard him saying 'sorry, babe' and as he and Steph discussed Clayface's actions at the end of the story I got the sense that the events had touched a nerve – I'm looking forward to seeing how this develops for sure.

Throughout recent issues I've become a fan of Pere Perez's artwork – it's both complimentary to the excellent work of Lee Garbett while at the same time he has a distinct style of his own and I'd have been happy to see him take on Batgirl art duties on a permanent basis. Although we now know this isn't going to happen I'll be interested to follow his work on other titles.

Although not his best in this series in my opinion I enjoyed Stanley 'Artgerm' Lau's eye-catching cover – once again it had a somewhat 'retro' feel about it and felt it really set up the issue very nicely.

If I say this felt like a 'bridging' issue that will immediately sound like a negative and it's certainly not meant that way – but that's what this was for me: 'we've' been on an amazing journey over the past year and I sense that journey is only going to get more incredible over the next 12 months. This issue was a chance for us all to catch our breath, remember where we've come from, where we've been and anticipate where we may be going.