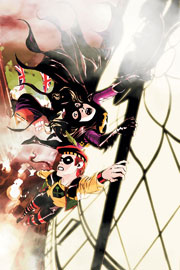 Amidst all the news coming from DC over the past month or – and worries for the future of some of our favorite characters – it’s been easy to forget that there’s still the present. Issue #22 of Batgirl is entitled “Five Minutes Fast” and opens at the home of Stephanie Brown and her mother.

Closing the door to her bedroom behind her Steph throws herself onto her bed, exhausted as she is after a long night looking after the citizens of Gotham City. No sooner has she hit the bedclothes than she receives an electronic message accompanied by a shadowed Bat-signal.

Several hours later, with her mother believing she’s on a school trip, Stephanie – under the unlikely pseudonym Constance Aberthine – steps out of Heathrow International Airport and into the cool London air. We’re not told it’s cool but it’s London so it seems likely.

Gathering her thoughts Steph reminds herself that her plans involve meeting up with someone she’s never met, crossing a city she’s never visited to find a hotel she never knew existed.

As Steph is woken from her daydream by a loud, unfamiliar voice she looks up to see a young woman on a motorcycle, with side-car, waving a sign with her name on it. Well, not her name exactly – “Aberthine”.

With their clumsy introductions out of the way Steph’s driver – Beryl Hutchinson, also known as Squire – apologizes that because of a prior commitment her partner Knight isn’t able to join them, while encouraging Steph to take her place in the side-car.

Just a few minutes later, with Steph wearing some of her hastily purchased souvenirs of London and clinging onto the side-car for dear life, the pair are stopped in their tracks by The Beatles crossing Abbey Road (!) when they hear the shrill cry of an alarm.

Nearby, at the Ministry of Management and Proper Accord, that same alarm has been silenced thanks to a gunshot blast from a particularly unpleasant looking character – known as The Orphan – who is, in turn, surrounded by a number of his men wearing similarly outdated clothing.

Having watched on for a few moments Batgirl and Squire, by this time in their crime fighter costumes, leap into action as fists, elbows, knees and feet fly. As the group – minus their obvious leader – are taken care of Steph wonders aloud just what could they want at the Ministry: all they could find to steal there is clocks and more clocks.

“He’s after the Mean”, explains Squire, “the Greenwich Mean”. No, really, it’s an actual thing – a physical thing Squire goes on to explain as she and Batgirl make their way deeper into the bowels of the Ministry. Continuing her fantastic tale it appears that during the blitz a crack in time was opened that only the Greenwich Mean could plug … holding time together.

As the two young women again come face to face once again with The Orphan they discover that he’s about to free the Greenwich Mean – that takes the form of an impressive-looking sword – from its binding, thus reopening the crack in time.

Warning the pair that they ought to be more concerned by the bombs his men – his ‘Urchins’ – had strapped to the Ministry staff The Orphan releases some sort of energy pulse from the Mean, knocking Batgirl and Squire off their feet. As The Orphan makes his exit the two young women set off in pursuit only to be stopped in their tracks when they discover that everything – everything – appears to be frozen in time.

Outside the Ministry building the enormity of their task begins to, initially at least, overwhelm Batgirl and Squire. As this leak in time spreads it’ll reach Europe and beyond.

“… Batgirl and Squire have to save the world”.

As Batgirl wonders aloud where The Orphan could possibly have disappeared to Squire has a ‘eureka!’ moment and pieces of the puzzle start to fall into place for her …

Shortly after, and elsewhere the time-slip has reached Knight’s ‘prior commitment’. With everyone at the charity event frozen in time The Orphan is seeking his own particular brand of justice as he positions the tip of a jousting pole in front of Knight’s face and in line with his brain. We do a lot of jousting here in Britain.

As Squire and Batgirl warn him to step away The Orphan orders more of his ‘urchins’ to deal with his unwelcome visitors – an act that surprises as Steph wonders just how his men are able to move when everyone else around them can’t. As more fists fly reality strikes … it appears the urchins are each wearing some sort of mechanical device – clocks – around their waists, and when those devices are destroyed they also become frozen.

Unable to rely on the support of his men The Orphan attempts to make his exit before being confronted by Squire. Easily knocking his opponent to the ground he explains that the time-slip is starting to affect her – and when he returns the Greenwich Mean to its rightful place Knight will be finished. While taunting Squire it appears that The Orphan had forgotten about Batgirl – and he’s rudely reminded that the fight isn’t over as Steph launches herself at him, knocks him off his feet and ‘pick pockets’ the Greenwich Mean … sending The Orphan himself into the time-slide.

Soon afterwards, and with the crisis averted, the honor of returning The Greenwich Mean to the Ministry of Management and Proper Accord falls upon Stephanie, accompanied by her new friend Beryl. As the pair head back across the city they discuss their own relationships with their ‘mentors’, Knight and Batman. Beryl explains to Steph that she and Knight have been through so much, they’ve shared both good and bad times. These comments strike a chord with Steph who admits that she’s just a little jealous of the relationship.

“… you are most certainly not a sidekick” Beryl tells Steph.

Finally, with the world once again safe, Steph reaches the comfort of her hotel room. Once again shutting the door behind her and falling onto her bed she’s reminded of the reason why she came to London in the first place … coming out of the shadows in the room it’s Batman.

Fun, delightful, charming, bitter-sweet: all words that come to mind when describing this issue of Batgirl. An immensely enjoyable story that, as so often this title does, focuses on the relationships between its characters every bit as much as it does on the plot.

Bitter-sweet because there are only another two issues of Stephanie Brown’s Batgirl before the book is cancelled.

From Dustin Nguyen’s striking cover to Pere Perez’s wonderful last panel my face was fixed with a smile of enjoyment and satisfaction. Bryan Q. Miller’s writing was – and always has been on Batgirl – a delight: real and yet fantastic characters treated playfully yet with a warmth and depth that for me is sadly absent in so many other books in the market today.

I really didn’t know what to expect when I read that Steph was heading to London for her team up with Squire. For one, Knight and Squire aren’t particularly characters that I have much history with. For two, I find ‘Britishness’ often gets overplayed and what to some may appear as ‘quirky’ often crosses the line for me and becomes just silly or strange.

Although we had a plenty of the ‘Britishness’ in this issue Mr. Miller, as I’ve come to trust, kept it right on the edge, skilfully avoiding the so often taken route of ‘overplaying’ this aspect and therefore slipping into the aforementioned silly or strange.

One or two of the scenes did, to me at least, come across as being a little wordy – particularly when Batgirl and Squire confronted The Orphan as he was about to remove the Mean – which seemed a shame because as much as this meant a lot could be said in a relatively short span of time, the panels themselves felt a little overwhelmed by the speech bubbles.

As for the plot itself, I loved the interpretation of the Greenwich Mean Time as a ‘thing’ – something that could be stolen – leading into the idea of a time slip: great fun and an imaginative core around which the issue could play-out.

I appreciated the themes of trust and respect that I picked up from the book – Bruce trusts and respects Steph enough to engage her in Batman Incorporated business; Beryl respects, and envies a little, the relationship that Batgirl shares with Batman and the place that she holds within the Bat-family and, in her own right, within the crime fighting community. I only wish the publisher had as much trust and respect for Stephanie as Batgirl.

Pere Perez has become a very firm favorite of mine through his work on this title and this issue added to my admiration. Stephanie’s ‘disguise’ when leaving the safety of Heathrow Airport was wonderfully illustrated – I don’t even think her mother would have recognized her! – and I’ve said many times about how much I appreciate how he draws Steph as Batgirl.

The Orphan and his gang of urchins were very nicely portrayed I thought – Victorian-styled clothing that very much lent itself to a story about time, I noticed that even the firearm the groups leader used had the appearance of a highwayman’s pistol rather than a more modern weapon.

If I can use the word again, fun is very much the word to describe Dustin Nguyen’s cover – each with such a wonderful expression on their face, hanging way above street level from the hand of an impressive-looking clock face, cape and hair billowing behind and below them. This image – minus the inappropriately placed advert for the Green Lantern film – will indeed be one of my favorites from the entire series.

Buy Stephanie Brown’s Batgirl while you still can.