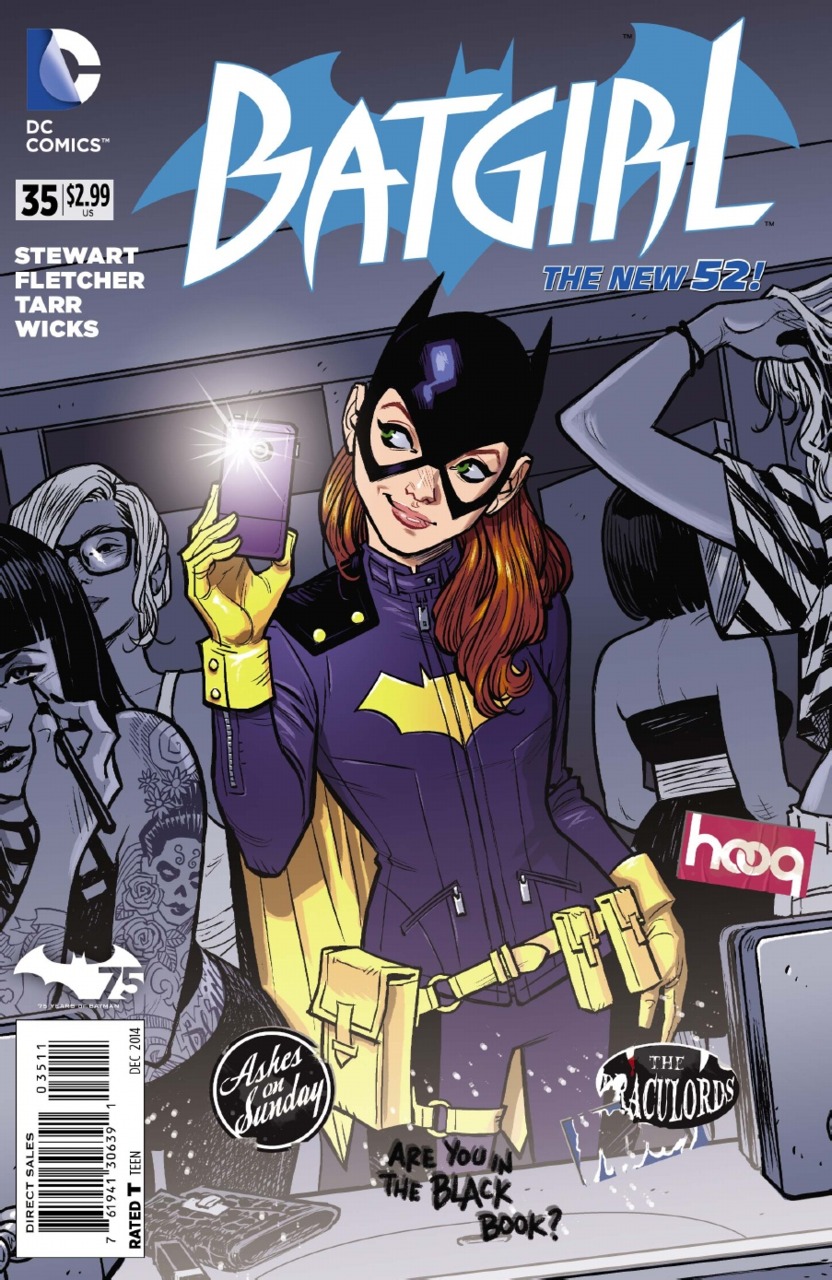 THE PLOT: Recently moved into the Burnside Apartment complex complete with new roommates and neighbors, Barbara “Batgirl” Gordon finds herself presented with a new mystery involving the theft of the block’s personal belongings which includes cell phones, laptops and tablets. Simultaneously, Dinah Lance arrives at Babs’ new digs informing her of a fire that destroyed her dojo and Babs’ Batgirl gear. Barbara dons a new costume and is hot on the heels of Riot Black, an info-hacker who steals people’s personal info and blackmails them online. Batgirl defeats Black, but everything he stole was wiped from memory, erasing her schoolwork from her laptop. In the end, Babs admits to Dinah that she had explosives in her van that must’ve caused the fire. She gets a text from an unknown person threatening her to stay away from Burnside as Batgirl. Someone knows who she is beneath the mask!

THOUGHTS: Ahh, the new era! What pop culture enthusiast doesn’t enjoy the coming of fresh new takes on brands and franchises they love? Well actually, a lot of people don’t like change. If nothing else however, it’s always interesting when new blood shows up and flips the script on something you’re following in order to give it a fresh start. Showrunners for television shows, developers for gaming franchises and most importantly writers and artists for comic books all share the unenviable task of energizing the fan base with things they’ve not seen before whilst keeping it recognizably still “the thing”.

I have to say that even considering the lead-up to this new run and the excitement building up to it, this issue was still a shock to the senses. It’s so unlike anything we’ve seen in a Batman-related title for years, if not ever. There’s still Barbara with her red hair and determination, we do see Alysia in a scene or two, and Black Canary makes an unexpected-yet-welcome appearance. Despite all of that, this issue feels almost entirely alien compared to any other DC Comic out right now. It’s so…youth-y.

That’s not meant to be a pejorative, but it doesn’t come away with the book without any blemishes either. I can safely say that I liked this issue. I’m down for what they’re doing and look forward to reading more. The storytelling presents the comic as a colorful, energetic, light-hearted affair that seeks to entertain us each month. Comics by nature should always do that, but the temperament of modern storytelling tends to have the characters too wrapped up in their own storylines and drama to the point where the book gives off more weight than you’re bargaining for. Issue #35, while not without character, some drama and a storyline, feels like a back-to-basics approach in classic superhero comics, while at the same time feeling new and unique. For that and that alone, this issue a success.

However, as an example of contemporary storytelling…this issue isn’t going to date very well in a few years.

DC Comics has a history of trying to have their characters fit in contemporary times. I’m thinking of Denny O’Neil’s revamp of Wonder Woman in the 70s when she was more of a Mod, bell-bottoms wearing martial artist who sought to exemplify the then-modern action woman. O’Neil’s Green Lantern/Green Arrow series is another example. That run is known more for its tackling of societal problems, but if you read those issues, the dialogue, fashions fads are totally frozen in 1974.

Batgirl #35 shares the same…”affliction” is too harsh of a word, but few others describe it as succinctly. This book is so covered in 2010s sensibilities that it’s swimming in it. While that was never exactly hidden from how creative team Fletcher/Stewart/Tarr described the series, it really comes into realization how much of an influence youth sensibilities from the past three years have impregnated this run. While it’s never a bad thing to be as modern as possible in something like a comic book, there’s always the danger of turning off the audience should you come off as superficial or false in how you interpret what makes today’s young 20-something “today’s young 20-something”. DC is historically fairly notorious for coming off as less hip and “with the times (man)” as Marvel, so they have a bit more to lose in trying for something like this issue. So when the pop-culture/information-age/social media culture hits so hard in an issue like this, warning signs go off almost inadvertently.

Most of it however isn’t a big deal. Although her Simone’s run wasn’t devoid of a diverse cast of characters, Stewart, Tarr and Wicks’ artwork has this world looking colorful both in ethnicity and in personality…most of the time. Frankie seems to be a very friendly character with has an aversion to long pants and a helpful energy to keep Babs’ social life visible. Right away one of the unfortunate casualties of the previous run is avoided, and Barbara is shown out of costume easily more than she’s seen as Batgirl. The plot is more related to her in her civilian identity, but with the coming of Frankie and other characters, the team establishes that this isn’t a life that Babs can just cast off whenever convenient. Alysia, like her or not, was left way out in the cold too often and in my opinion wasn’t seen enough. Frankie propensity for parties and social contact has it to where Babs will look suspicious quickly if she tries to get caught up in her Batgirl life in the same way that she did when she was rooming with Alysia. Contact with the outside world (that being the innocent, unassuming non-costumed supporting cast world), makes superhero comics inherently more interesting. It splits the focus and gives the reader more to chew on. For that, the “youth movement” in Batgirl is a good thing.

It does start off on a fast start however, a bit too fast for my tastes. Babs moves in with an as-of-yet-until-now unseen friend, meets a guy and is hung over all in a page, practically off-screen. It gets the run to a blistering start to the point where I think it went for style over substance. It’s been established that Babs doesn’t drink, so having her drunkenly make out with a stranger really feels like the book is going for whatever modernity it thinks it’s presenting while forsaking Barbara Gordon as a personality previously demonstrated. It’s a misstep that doesn’t leave too much of a sting at the end of the day, but does come off as a warning sign to geek of Babs Gordon from issues past. If we’re going to have an out of character moment blithely shown while being off-screen, the new style and storytelling of the book won’t be worth it. Again, ultimately it’s not too big of a deal but I think it’s worth stating that while the main character is 21, she isn’t any 21 year old.

Whilst we’re on the subject of what some people wouldn’t do, would a criminal info-hacker who brazenly holds a party threatening whoever’s personal info he gets a hold of really garner followers? I’m sure there are people online who would secretly form a following, but I got no sense that Riot Black was being shown as anything other than an utter d-bag. Seeing people actually at a party he held, snapping pictures and raving…makes no sense to me. It’s an example of a “young kids have parties” mindset rather than thinking about why they would actually be there.

Finally, I like the fact that Dinah made an appearance and is seemingly going to be in this title. I wasn’t crazy about her and Babs constantly butting heads, to the point where I’m wondering why are they still friends. Especially at the end where Babs admits to literally ruining everything Dinah had in her life. And Dinah, was right, Babs was being selfish in only being concerned about her things when Dinah’s home was destroyed by a bomb Barbara herself had. I didn’t like the fact that Dinah suffered this great loss due to Batgirl’s derping. I hope that the two of them sniping at each other won’t be the norm for this series.

Overall the new team on Batgirl came out of the gate scoring touchdowns, but not without a fumble or two. I honestly believe the problems I had with this first issue aren’t indicative of the run as a whole, because like a new Doctor’s first season on Doctor Who, you can’t expect everything to be laid out from the very beginning. What we’ve been given here is good, and I’m down for what comes up next.