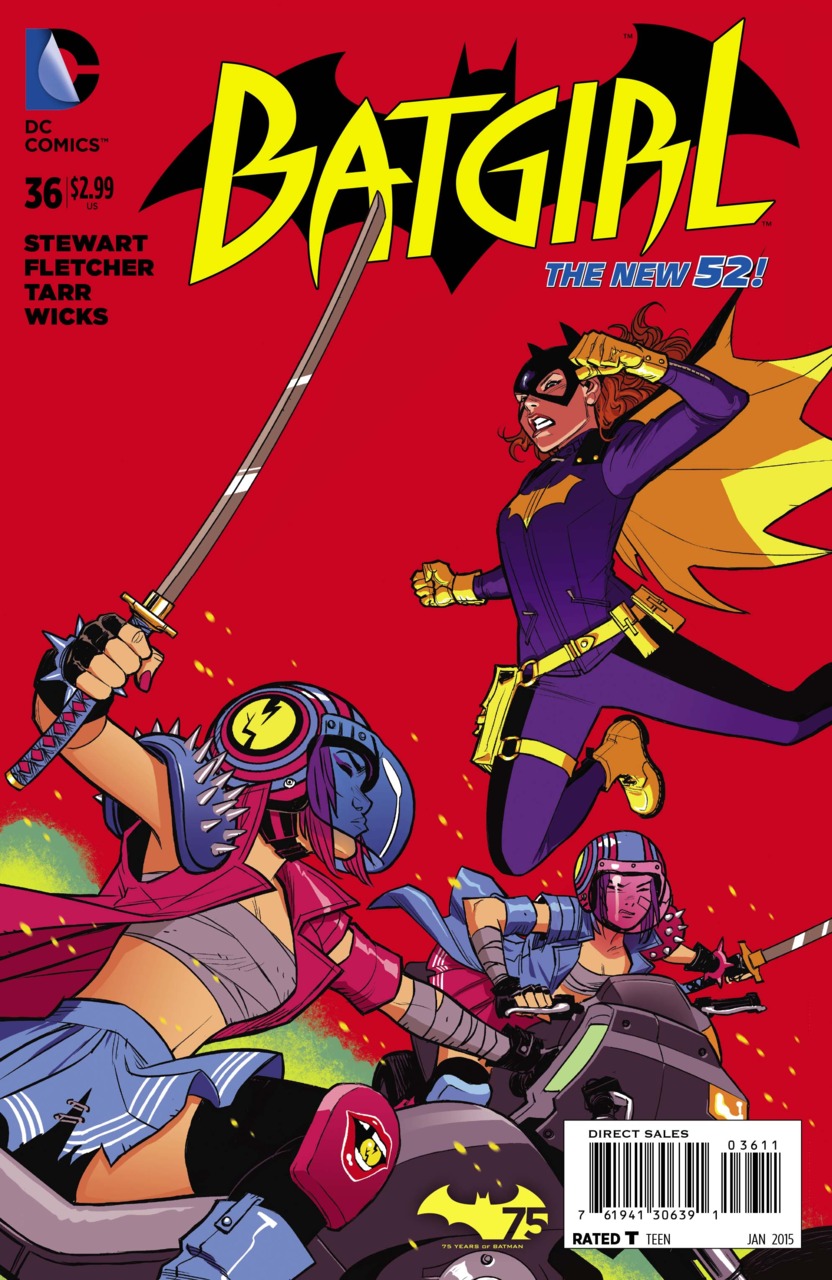 Batgirl finds herself pitted against the Jawbreakers, evil motorcyclists who’ve seemingly come to life from a show she watched as a kid!

While setting up shop at Burnside College and meeting some of the faculty, Babs witnesses an assault from twin bikers with swords. Remembering them from the anime “Atomina” she watched when she was seven, Babs learns to outwit the duo and finds herself deeper in the mystery of the person who knows her identity.

I really enjoyed this! While the previous issue served well enough as a trial run for the new era, #36 is just an out-and-out good issue. It’s fun, funny, mysterious, and it serves as both development for the overarching plot and a solid done-in-one story.

A mistake I feel I made in the last review was not talking about the art as much, so I’ll rectify that here. While Cameron Stewart does the layouts, Babs Tarr defines the finished artwork. She’s the one who gives each character their sense of fashion, facial expressions and body language. For someone who has never worked in comic books before, Tarr’s style works brilliantly with the format, making every panel count to the fullest extent. I read this issue on Comixology, so I really get the chance to hone in and see how each moment is dramatized. Tarr can give drama to the fight scenes, humor to the everyday stuff, and put fun details in the backgrounds in a way I’ve not seen since Rob Gilroy on Chew. Listening to the interview Team Batgirl gave Stella on Batgirl to Oracle revealed the level of interest she has in filling out the background with in-jokes, and that continues in this issue. Robot Pony for example gave way to various references to popular anime, from the obvious like Sailor Moon and Akira to the more recently popular like Kill La Kill. The script puts Barbara in these 2010s-type situations concerning technology and social settings, but it’s Babs Tarr’s artwork that really brings it all home without the setback of looking photo-referenced. I’ve noticed she often gives Barbara a pouty look on her face which isn’t always to my liking, but for every pursed-lipped mouth, there’s the glint in Batgirl’s eyes which gives the character a familiar yet intensely different edge to her.

While I may have enjoyed the plot of the issue a bit too indulgently since I’m an anime fan, what makes the story work is the real-world sensibilities it invokes to be completely believable. There are no weabos or dorky otakus to be found here, which would be akin to writing in Big Bang Theory-esque comic geeks in a story about comic books. Anime is more popular with young adults in America than it was with kids in the 90s (those kids having become young adults), so to have Babs remember the dubbed version of an old show, investigate at a shop that looks like Blippo.com, and have the evil mastermind play on the fandom both Batgirl and the villains had for the series made this issue realistic in a way that was completely charming. It speaks to both the good side and bad side of fans, having two cosplayers easily become attempted murderers, and even inserting the snobby attitude of the “Sub vs. Dub” section of anime fans. While Atomina (or, “Science Battle Hero Nuclea”, which is reminiscent to “Super Dimensional Fortress Macross” or “Robotech”) looked like a cross between Jenny XL9 and Mega Man, there’s also a slight bit of subtext in how the cute, non-threatening crimefighter is underestimated in the world of the Batgirl comics.

This issue introduces three new characters who I’d be shocked if they never appeared again. We’ve got Quadir-who looks like Ben Whishaw from Skyfall, his sister Nadimah, and Jeremy Degroot-yet another cute, older gentlemen in the long line of older, cute gentlemen. I don’t really mind the guy’s inclusion, but it has to be said that in the past few eras of the Batgirl characters, specifically Babs and Stephanie, the older, cute guy archetype has been used quote often. We had Babs’ physical therapist at the start of the Simone run who, in fairness, did not last. We also had Detective Nick from Steph’s book. Let’s not forget Jason Bard, who may have been the originator of this trend. The character of Jeremy is fine, but I do wish he’d be a little more distinctive, as those aforementioned characters are exactly what I thought of when he popped up. As for Quadir, there’s a strong Morgan Freeman Lucius Fox vibe one gets when seeing Batgirl ask him to make a grappling gun. While the idea of a tech guy is cool, I’d personally like it if he learned her identity. It’d be more interesting in my opinion.

The battle with the Jawbreakers was a great fight scene in how it was paced and staged in a way which served for an exciting action scene but didn’t fall on the typical tropes of full page splash punches and unnatural dialogue. The characters didn’t waste time, they just fought. I have to say the sequence with Babs/Batgirl watching Atomina with her dad was initially very strange to me. It went from a memory to Batgirl seemingly confusing herself to be back in that moment. Like, why was she crying? Upon reading it again, I imagine it was just a fun way to illustrate her thinking through the fight and how to beat her opponents. I really loved Jim Gordon being there and calming his daughter when she’s just watching an anime show. It was a tender scene and also slips in some background with the line “Observe and analyze like I taught you.” From her perfect memory, he always took his daughter very seriously, even when she’s fretting over a cartoon robot. That’s the Jim Gordon I recognize, and it was one of the best scenes the character’s had in a long time, even if it was in the past tense.

The only thing I wasn’t crazy about in this was Dinah Lance’s appearances again. I understand that she and Babs are in a spat, but in this issue she’s not just angry at her. She’s an out-and-out “mean girl”, always talking down to her despite the fact that Babs is helping to put a roof over her head. I understand her anger, but it puts Dinah in an awful light. It’s not for nothing, as I laughed out loud when Frankie said “You know she doesn’t have to stay here.” The behavior is intentional, so I hope to see it further explored and less in a prickly manner.

Overall this is probably my favorite comic I’ve read this month, which includes various Spider-Verse tie-ins, Miles Morales and Ms. Marvel. The new creative team has definitively made their mark on this character, and I’m dying to check out the next issue. It feels so good to say that.