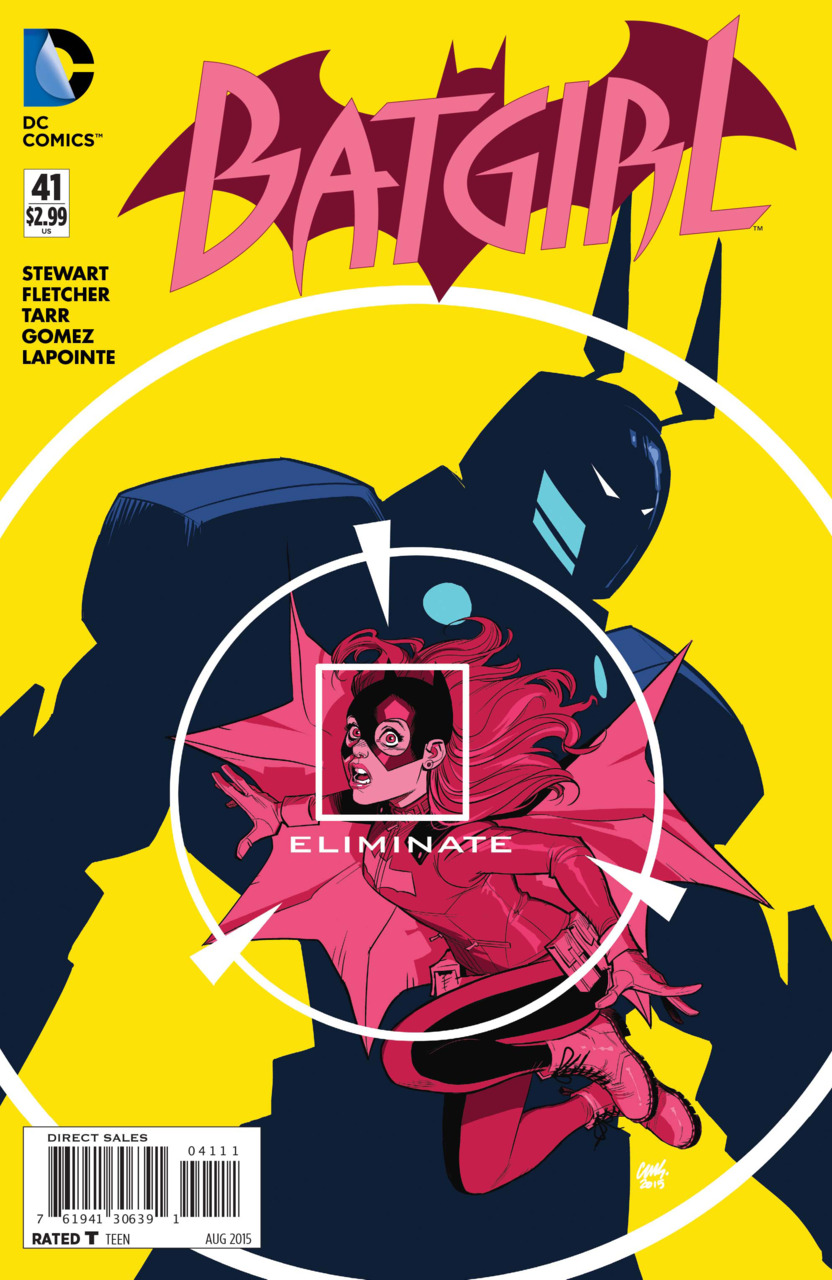 THE PLOT: While battling a cult trying to resurrect Hooq, Batgirl is introduced to the new Batman, whom she later learns by confession is her father Jim Gordon! Later that night, Livewire has come to Gotham and starts wreaking havoc. Batman arrives, and once Livewire escapes, he sets his sights and handcuffs on Batgirl.

MY THOUGHTS: It’s been a while since a new issue of this Batgirl run has come out, and it’s good to see it again. I wasn’t over the moon with how the last story arc ended, but I still liked the series at the time. With Convergence coming and going, I did begin to wonder if my enthusiasm for the run was beginning to wane. The ever-present hipsters, constant name-checking of technology…I was beginning to feel that the novelty was wearing off, leaving behind what makes it a good story or not. Thankfully with this issue, Team Batgirl hasn’t lost a step and continues to deliver another solid entry in this revitalization of Babs Gordon.

This is classic comic book storytelling at its best. We see development with Frankie’s induction into the fold, as her and Babs new partnership only strengthens their friendship whilst realistically worrying Barbara. Frankie’s still down, so there’s yet to be any worrisome “I can’t do this!” angst like I remember there being with Proxy/Wendy from Stephanie’s book. They’re being coy with her new hero name, so I’m guessing it will neither be Proxy nor Oracle. I liked seeing that she’s having fun with it, as helping out a superhero should be pretty exciting. It’s also an interesting reversal from the Birds of Prey days when Oracle was tech support for the mobile heroes.

James Gordon makes his first corporeal appearance in the title, looking (as you know if you read Batman) nothing like his usual design with the lack of glasses and a mustache. I loved Babs repeatedly bringing up that she misses how he used to look, as even the man’s own daughter prefers to see him how the readers do. I found it to be a struggle recognizing the character as Gordon, because he’s one of the more distinctive comic book characters. It works for the storyline, and he stayed in character, so hopefully the transition won’t remain to be too jarring for long. The scene where he tells Babs he’s Batman was great, mainly due to the look on Babs’ face. It’s utterly priceless, and reflects how this comic balances grounded character drama with slightly exaggerated and enthusiastic character designs. The manga influence is still present, as evidenced by Robo-Batman having a pulsating vein appear on his Bat-Suit after a guy threw a chair at him. There’s also a nice reference to Sailor V when Babs and Frankie are at the arcade, although it looks as though she’s playing Galaga.

But going back to Gordon, I was annoyed with the solicitations that we would be seeing yet another storyline where Gordon hunts after his own daughter in the name of the law, because 1) that story idea was so recent and 2) the last time they did that it was hackneyed and terribad. I can just about buy it here because it’s not because of trumped up charges against Batgirl. She really is a vigilante and meets the minimum requirements to be arrested in Gotham. Actually the idea is neat that if the GCPD were to act as Batman, they’d want to round up all the members of the Bat-Family as they would be wild cards. It’s not that bad of a story when done logically.

I really liked seeing Livewire, as I enjoyed her appearances on the Superman animated series (though Michael Bailey hates her) and doubly liked the references to her first episode in the artwork of Babs’ flashback with Batman. I guessed it was her from the moment she appeared and was pleased to be right, but I think she makes a great challenge for Batgirl. I really liked how Babs addressed her first as Leslie instead of just treating her like an evil villain, even though she is. It was a nice, subtle bit of character that distinguishes her from the usual set of heroes.

I was pleased by how much I enjoyed this issue. To be honest, my trepidations going into it are on me. The last issue wasn’t much to put me off the run, I just put it into my head that things wouldn’t be as good for no real reason. “Batgirl” is as solid as ever and this issue is a great reminder that the first storyline wasn’t a fluke.