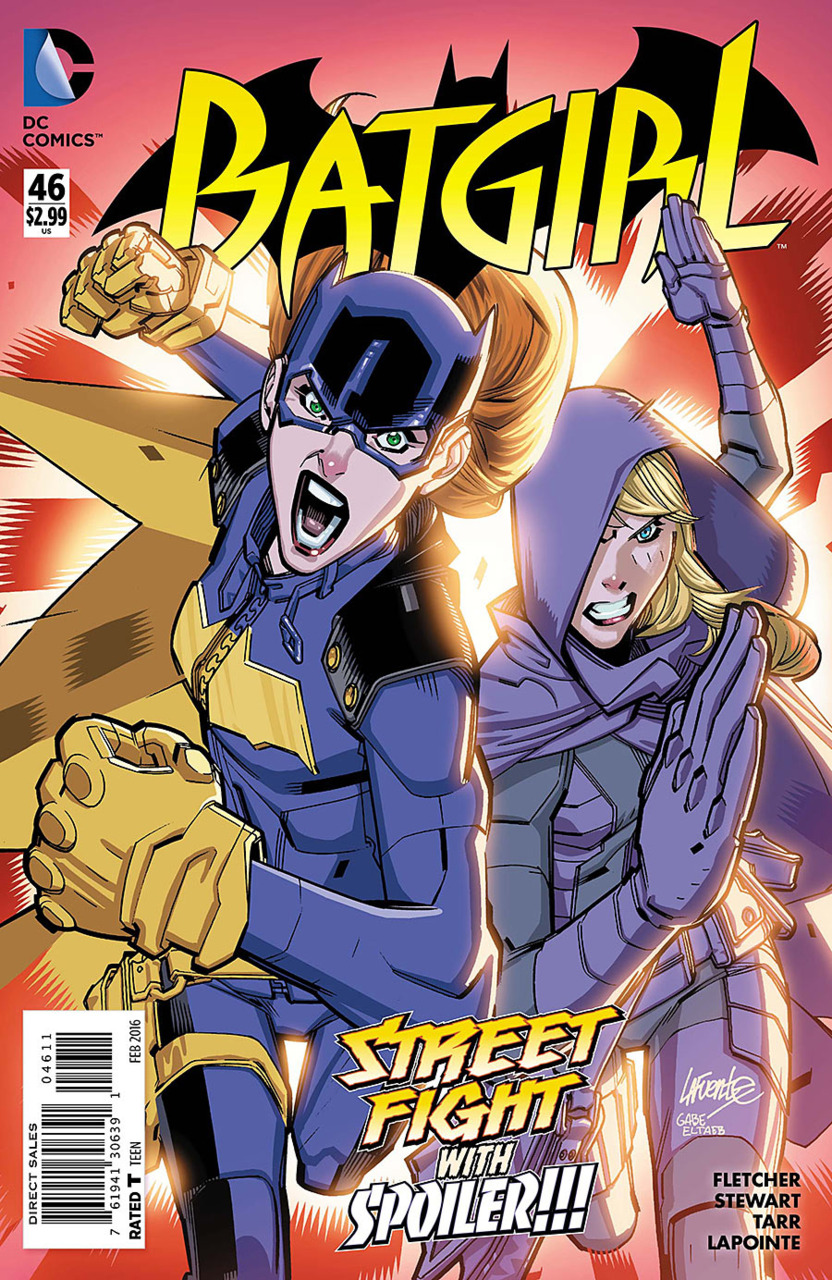 Batgirl is talked into helping out the Spoiler escape from the middle of a Gang War!

MY THOUGHTS
This is a perfectly decent issue on its own, yet I found myself cold by it all the same.

There’s not much to really say beyond some basic observations. Unless I’ve missed something, Barbara’s in the middle of trying to help the locals of Burnside deal with the pressures of gang violence, hiked rent and general gentrification hassles. After the previous few issues, I’m wondering where exactly this came from. It serves to make Barbara act as a hero/savior both in and out of the costume in service of the more obvious purpose in stressing her out and having her complain about the complications that come from being too good of a person.

Between being Ms. “Fix-it” in the previous issue, offering to provide shelter for someone we’ve (unless I missed something which I don’t believe I have) never seen or heard of, and this new subplot, the writers are really putting Barbara over as a Good Samaritan. I’m personally weary of the book being about how awesome she is, and would rather have it involve more personal adventures, such as her feelings towards Luke or thoughts towards the Robin gang. I think the novelty of the current Batgirl Team is fading, as their very straightforward style of storytelling doesn’t seem to have many different dimensions to it. Maybe that’s the approach they settled on when taking this book, but at this point it feels too simplistic and I’m finding myself not caring about whatever Barbara’s complaining about in each issue. Especially when it’s not personal to her.

The thing’s she says are stressing her out include Alysia being on her Honeymoon. Umm…what? Why would that worry her? Alysia’s hardly been in the book as it is. Things like that make it seem as though the reader is meant to want to pat Barbara on the back and give her a big hug, but there’s a lot of telling and not showing, especially when it comes to things we as the readers aren’t being made fully aware of. This book really has to put some personal investment into Barbara’s character, like they did last issue, and not just concentrate on keeping her busy and interacting with different people.

Also, I’m personally tired of the constant preoccupation with data storage and data analysis and anything to do with data. I understand that this Batgirl is proficient with technology, but the interest shown by the book is overrating that particular element of the comic. Give us more scenes with Nadimah or even one between her and Quadir. Show us how Luke feels about Barbara when he’s alone. Put more humanity in the book.

In terms of the Batgirl/Spoiler team-up, it was okay for what it was…but because of the reboot Stephanie could have been anyone. I was hoping this would be the start of establishing a new relationship between the former mentor and apprentice, but there’s nothing resembling their previous interactions to suggest that this team-up was more than surface-level fanservice. That in and of itself isn’t a sin, but disappointing when considering the potential.

Again, this issue is fine but it left me cold. I’m really wondering about the book as a whole now, and if deeper storylines and characterizations are coming or if they’re just not what this creative team is interested in.