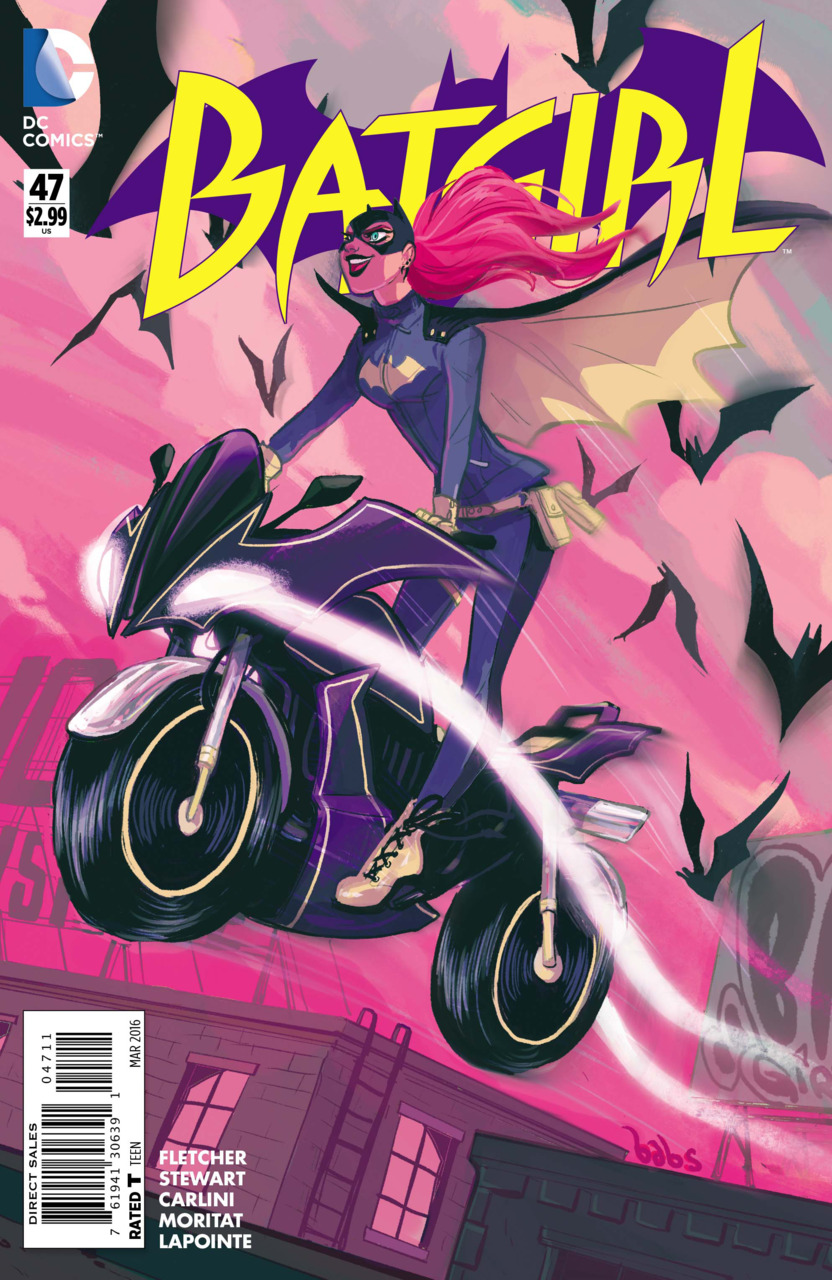 Batgirl, the Spoiler and Bluebird go incognito at GCPD to learn who’s been wiretapping and info-hacking Barbara’s research!

This is one of those comics where if the right artist doesn’t work on an issue, the engagement is severely hampered by his/her absence. For this issue, I don’t know if Babs Tarr would have made this immaculately better, but it wouldn’t have felt as jarring. With two artists putting in the work, the flow of this issue felt off for me. Nothing to do with its pacing, I simply don’t think Carlini and Moritat work well for this series. Their style was definitely marked for its resemblance to Tarr’s lighthearted work, but because Tarr is a much better artist, it wasn’t a favorable transition. I would like to see a Cameron Stewart drawn issue, especially if he was doing the breakdowns for the first arc.

The story was engaging insofar as we got to see more interplay between Batgirl and other Batman Family members. Bluebird and Spoiler get more play in other books and Babs has been almost entirely celibate when it comes to mixing with members of the Bat-Team, so to see Spoiler return was nice. Stephanie’s still being written a bit too “Genki-girl” for my tastes, just to contrast with Barbara, but for the character that she’s being depicted as she worked well for this issue. I would’ve liked to see Babs and Harper interact more, especially since Harper’s after Babs’ title as the techno-geek of the Bat-Squad.

I’m still not caring about the community/info-hacker plot of this arc. It feels like a lot of important elements are still being introduced off-screen. Babs’ friend Greg is the most likely suspect in haunting her dreams, but so far I don’t really care. We know nothing about the guy, so if he turns out to be evil and Babs feels betrayed, so what? We never saw him before so what emotion could the readers experience towards a new character?

This book still feels emotionally sterile for me. Babs is worried and preoccupied about stuff that the creative team just cannot seem to relay to the readers emotionally. It was better in the first arc, when it was all about Batgirl’s reputation and her moving on in Burnside. I can’t pin down exactly what’s failing this storyline besides emotional engagement, but I hope it wraps up soon. One final note about Luke: is he really her boyfriend? He only seems to show up for moral support and little else. Is this meant to be a serious relationship?

Not a bad issue, but just slightly above boring unfortunately.