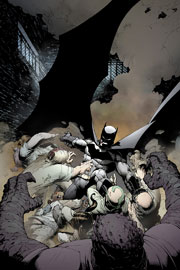 Since the beginning of this DC relaunch till now, the bat-books have been average some good (Detective Comics for the most part, and Batwoman) some terrible (Batgirl, Batwing…ugh) but no bat-book and I mean NO bat-book has blown me away like Scott Snyder & Greg Capullo's Batman #1. I simply can't think of one single bat-book in the entire DC relaunch that has had this much of an effect on me. I mean I still haven't picked my jaw up from the ground because this issue twists so sharply, so much so that I think it's safe to say that I don't think I've ever been hit that hard with a plot twist. I simply did not see it coming an adding that with the fact that the killer's DNA matches one of Bruce's most trusted companions is what really killed me. I’m not going to give away who matches the DNA, and if your reading this you probably already know who it is, but we all know there is something more to that one piece of evidence and that that person probably isn't the killer, but it's going to be more than exciting to see it all play out. I'm just wondering where Snyder's going to take it.

The writing in this issue is expertly written and perfectly paced, first we get the same old Arkham breakout with a clever twist followed by the majority of the issue that tells of Bruce's plan to rebuild parts of Gotham and finally ends with a creepy murder and a gut busting twist which ends the issue perfectly because all of the coincidences and the evidence to support the DNA match is all there it just doesn't reveal itself till the end which is essential to any great story. But it's Scott Snyder's genius that shines in this issue, the quality and eloquence with which he presents his story is unrivaled by today's standards and if there is anyone who's carrying the torch for the bat-books, it is Scott Snyder.

But it's the characterization of Bruce which is best represented here and which should be the ideal representation of the character in this new universe. Bruce is almost the same Bruce we've known for all these years, dark and brooding. But he is able to turn that off and become the intelligent, social Bruce. It's the perfect balance because he's not too dark but not too bright and cheery in fact if we could combine Tony Daniel‘s Bruce with Snyder‘s Bruce we would have one of the most established and complete character in the DC Universe. But, Bruce would be nothing without his supporting cast who all get there time in the spotlight especially Dick who gets more face time (for a reason) compared to Tim and Damian. It just goes to show that Dick, Tim and Damian are still big parts of Bruce's life and makes it harder to believe the evidence presented and revealed at the end. It was also great to see Harvey Bullock make an appearance where he isn't just the guy who stands behind Gordon and is just there for no apparent reason which rounds off an already well-rounded story. I mean I know people complained that it moved very slowly during the banquet/fundraiser scene and to be honest it kind of did, but Snyder more than makes up for it with the beginning and, of course, the end which leaves you anxiously awaiting the next issue.

As for the art, I think it could have been a bit better, the cover especially which was very unattractive to me. I hate to say it though because for the most part I love Greg Capullo's art especially his X-Force stuff for Marvel and it's a shame that I don't like his art in this issue. It just seems rushed and disorganized like Snyder's script was too much for him to translate, which is absolutely absurd of me to say because of the legacy he has left at Image and Marvel. It does work in some spots though, but for the most part its very rushed and inconsistent so I‘m going to have to fault it for that. The colors however were great to look at, like the story, the colors have just the right amount of light and darkness throughout which blends in well with Capullo's art and helps him out a bit.

Overall, if you take everything into account, this is one of Snyder’s finest showings yet, the story is strong and he seems to know who Bruce is which was one of my little reservations going into this issue. Really, the only thing that needs work is the art, Capullo needs to step his game up a notch and give us some quality work especially on his covers if one were to go off this one issue. But as is usual with Snyder’s Batman work, I absolutely cannot wait for the next issue, this issue was what all the other relaunched bat-books should have been and is, to put it simply, the reason why I love Batman and why I read comics in the first place.