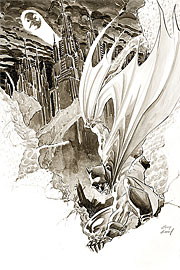 If you haven't been reading the Latest News on TheBatmanUniverse.net (Why haven't you?!!), then you would have missed that Dan Didio has had a change of heart about Batman Beyond appearing in a future DCU title. Well, I think I may have just read the first issue! Judd Winick and Mark Bagley have combined their artistic wisdom and turned Dick Grayson into Terry McGinnis.

For those of you who don’t remember the cartoon, Batman Beyond was about a youthful-spirited new Batman mentoring under an aged and gloomy Bruce Wayne. One of the major criticisms of the show was that Terry’s “voice” was too similar to Spider-man’s; he talked while he fought, and seemed to be having fun. Not very Batman-like to be sure. Batman#689 takes Dick's character too far to that lighter side. He is drawn in very bright colors and his inner-dialogue and repartee during the fight scenes are too reminiscent of a teenage McGinnis or a young Dick Grayson for that matter. Dick isn't new to crime fighting. He is a seasoned, BALANCED hero, who while less dark and obsessed than Bruce, still has demons of his own. His portrayal in Batman and Robin, Streets of Gotham, or even Batman Blackest Night show the complexity of his character much more effectively than what we are witness to in Batman. Grant Morrison has defined Dick's Batman so perfectly in B&R, why is Winick trying to take the least interesting aspect of his personality and focus on it so extremely?

I discussed this issue with some friends at my local comic shop, and they were a little more enthusiastic about this issue than I am. I think I am just fed up with reading one bad issue after another of what used to be my favorite title. I'm seriously considering dumping this from my regular purchases.

Mark Bagley's art is just plain boring. His anatomies are too textbook and his Batmobile is just ridiculous. Frank Quitely's flying Batmobile in B&R#1 blew me away with it's sleek stealth design and awesome power. Bagley's version looks like a flying Bugmobile. Worse than the pencils are Ian Hannin's colors. Painting the backgrounds of all your action sequences red and your dialogue scenes blue shows a lack of creativity that takes away any redeeming artistic impression the pencils may have had. Regardless of who is writing a book, comics are about the art. That's what makes them comic books. With Quitely and J.H. Williams III taking their craft to new levels on Detective and the aforementioned B&R, does DC really expect me to shell out $3.00 for this? Actually $4.00 for me because I am Canadian.

As far as the writing goes, Winick actually did a passable job in developing the story this issue. His ideas on how to develop the Two-Face/Penguin plot, and the Alfred/Dick dynamic are solid. It's his characterizations and voicing that seem out of whack. There is no edge to his personalities. His writing is too Saturday morning cartoon for what I think should be emanating from the pages of Batman. We should be delving into Dick and Two-Face's psyche and motivation. Winick doesn't have the ability to write with enough depth to make his characters more than one dimensional. I am not feeling the tension between protagonist and antagonist that would make me the least bit interested in a future confrontation between Batman and Harvey or Batman vs. Clayface and Lyle Blanco. Compare how in Detective, Greg Rucka is developing Alice as an interesting villain or even what Dini is doing in Streets with the intriguing Abuse. They are able in short order to create depth and interest into unknown characters. Winick is not only boring me with "The Soldier", his depiction of classic rogues like Two-Face, Black Mask and Penguin are equally impotent.

When I was nine years old, my father gave me 20 cents to buy my first comic on my own. I walked the longest distance I had ever walked alone and bought Batman #251 from my corner convenience store. The interior art and incredible Joker cover by Neal Adams haunted my mind for months. The brilliant story by Denny O'Neal reintroduced the Joker as the most maniacal villain in comics, and cemented him for eternity as Batman's arch nemesis. How unjust to Batman fans everywhere that Batman #689 and the entire Winick run is even under the same title as the masterful works of the past.

This review may have been more of rant than an objective critique of the issue, but sadly…