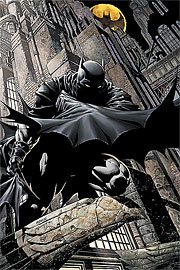 First off, let me state that I think that every Batman fan reading this that hasn’t read this issue yet should go out to their local comic shop and pick this issue up before they read this review because HEY, IT’S THE 700th ISSUE and it is quite the achievement, and for such a momentous occasion you shouldn’t read about it in a review and have it spoiled and thrown away on a quick read through on your computer screen. You need to hold the book in your hands, read it, soak in every word and panel presented, truly treasure the occasion and reflect on your own personal experience after it is done. So with that out of the way I will state that I will not spoil anything for you here, but I beg of you to PLEASE go out, buy it, and read it before you read this review. But what I will do here is give you a little insight to what is to be expected in these pages.

Messy is an understatement. Grant Morrison’s work on Batman #700, is what it is. A messy, garbled story of which we have no clue to what’s going on, but at the same time and in old Grant Morrison style it leaves the story up to the visual side of a complete and unquestioned whole that makes up what we love to read. But that isn’t necessarily a bad thing. All the hype about this specific issue aside, there is a coherent story there (of course) that begins, climaxes and ends all in one issue it transcends everything that I have expected and more. While sticking to a storyline, I can't help but feel that there is something more to this story. First, we start off with Bruce and Dick in the first story called “Yesterday” as Batman and Robin strapped to chairs in a maybe machine, a machine used to see what would happen if things turned out differently. We then see them surrounded by the Riddler, Mad Hatter, Cat Woman, and none other than the Joker. We then see Dick and Damian in the second story called “Today” taking up the positions previously stated, trying to stop an underground auction that is auctioning off weapons and other things. Finally we see Damian as Batman in the third story called “ Tomorrow” trying to stop a criminal named January from killing all the citizens of Gotham using an old yet familiar gas that makes people laugh. The end is the real kicker and will only be revealed when you read it.

I know, it sounds like none of these stories connect to each other, but they do through time travel and the consequences of actions which I must say weaves perfectly through a single twist of continuity and fate. While this issue and its content both visually and text wise offer a valuable story, I was expecting a little more from these pages action and story-wise even though the idea is there and makes it a wonderful read. Maybe it’s because DC, other Batman related websites and news stories hyped the hell out of it or because it falls short of the holy grail of content we’ve grown to expect from Grant Morrison. But I can’t help but feel that this issue would have been better if it was a one-shot. Which in a sense is somewhat true, the story could have been fleshed out a little more and it would not have been plagued by what had become a problem for Tony Daniels when he was the writer for the Batman series. While this issue is numbered within the Batman comic series, it is presented as a one-shot or something like it. Although I’m not quite sure if the events in this story will have any effect on other series such as Batman & Robin, I will state that I would like to see some of what is presented here in future issues or maybe a one-shot with the maybe machine being used again and acting as a plot device. This story/one-shot/whatever you want to call it takes us back to the past, to the current day and to the future….. Then further on in the future, and back to current day which like I‘ve said is pulled off and presented wonderfully, and most importantly in a smart, innovative way all the way to the end.

At the end of the issue there is bonus material in the form of artwork by artists that have worked on Batman in the past, while it is a hit or miss, Guillem March’s Joker art is something to be reckoned with, while Philip Tan’s Batman is also quite extraordinary and both I would recommend you take a peek at. The story, art, and bonus material is not only presented great here, but it also rings in and applauds the momentous occasion for what it is. This issue is the definition of a comic book and if there is any kind of redemption in this world, the 700th issue is it.

Like I’ve said before I think this story is much more than a typical run of the mill story. I think (besides the obvious examples that have been told in past issues) it’s a “passing of the torch or cowl” sort of story. With Bruce to Dick to Damian and so on and so forth. It’s an action or tragedy on a son who becomes a father who passes it on to his adopted son to another son to the future bearers kind of story. Because we don’t know who the future Batmen are and what their relationships are to who we already know I also think (while not directly stated or presumed) it’s a Father/Son story about those talks you had with your Father when you were a kid, and after all those years you look back and realize what your father was telling you, it was knowledge learned that we use to protect ourselves to fight for what we think is right, for what we think NEEDS to be right, to stand up for justice and the righteousness of what you think is the right thing to do . Everyone plays the part of the Batman no matter where you come from, no matter how you were raised, no matter what happened in your past. It’s a final confirmation that Batman is bigger than anything we can hold in our hands or that one person can fully grasp within a lifetime or perhaps will never be fully understood by any one human. Thus, there is a universal need for a wearer of the cowl to try to understand all the craziness and absurdity in this world to put together what it is that makes what’s right, right, and what’s wrong, wrong, and for the symbolic nature of an idea or philosophy to show all of humanity that there is some sort of greatness in every single thing we do, that there is goodness in the human soul, and finally but most importantly that there is hope in despair (all the while not fully understanding it at all), which in the end is what Batman stands for.

Overall, a great issue is all I can say. This is what I have been personally waiting for and Morrison delivers. As for the art Finch’s cover kind of echoes (dare I say) Jim Lee’s work. On the inside Tony Daniel’s pencils are top notch as they should be while Ian Hannin’s colors bring a grimness to an already grim scene. The other artists most notably Frank Quitely are all on par to deliver a great book. There are great things to look forward to in the future with the Batman series. With Morrison at the writers helm , who knows where we’re going?