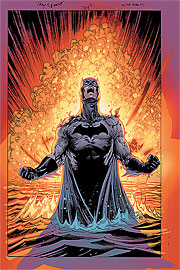 With Batman #701, Grant Morrison wanted to tell a “Lost story” that took place between Batman R.I.P. and Final Crisis. “Ok, that’s cool I guess”, I thought and muttered repeatedly unsure about the premise of the whole “lost story” bit. While it can be done right, most of the time it’s done wrong and doesn’t mean anything except to make it clear as day that it’s only filler to bleed a little more money out of our pockets. And that sadly is the case for Batman #701, while the foreboding is certainly there it is nothing new for those of us who have previously read Morrison’s material. But, the biggest fault here is that absolutely nothing happens. Sure, the beginning of the book starts off with Bruce escaping the helicopter wreckage and making his way back to Wayne manor to Alfred’s joy, but the story takes on a lulled attitude after that, it’s subtlety is a little too subtle. The scene where Bruce goes into the secret room is almost uneventful, boring, and meaningless. Sure, we get to see it‘s walls scrawled with the name Thomas and Barbatos, and Bruce‘s inner monologue wondering if there is some kind of sickness at the root of the family tree or a worm at the foundations, but that’s all. A lot more could have and should have done with the room, but it is left as an after thought or a throwaway panel. The feeling we get after we see the room is almost like when Geraldo Rivera opened Al Capone’s vault only to find two empty bottles that he tried to hype up and say “this was probably a bottle that held bootleg liquor back in the day, WOAH!!!!” Totally underwhelming and bland. Bottom line here is, it’s hard to get into the story and once you do and your committed it’s passed off and reluctant. After I read this issue I had a terrible feeling, I wondering why I read this thing. Obviously it’s a Batman comic and I kind of like Morrison’s writing, but the underlying fact is that this book just doesn’t deliver. I, more than anything, wanted to like this issue but it’s just not there. Whether it’s the brevity or the blandness of it, it just doesn’t deliver.

All that aside though, it does have some good stuff in it. What sticks out particularly for me is Bruce’s inner monologue, for which, it looks like he’s writing in a diary or notepad. Morrison hits Bruce’s tone and voice perfectly and you really feel Bruce’s fear/enticement for this whole “curse” mystery while he tries to piece it together. What also can be noted here is the fact that after Bruce escaped the helicopter wreckage, and after making it all the way to Wayne manor, he wants to go back out to the crash site to search for Dr. Hurt’s body. Upon Bruce’s return to Wayne manor Alfred comforts Bruce’s restless mind with his fatherly wisdom as Bruce makes his way to his bed to sleep off the hallucinations of the Joker venom. It is a scene that shows Bruce’s unwillingness to compromise, his stoic bravery, relentlessness for good, and overall detective intuition that no other comic book character can express within those circumstances. That, along with showing us the relationship between Alfred and Bruce is kind of what saved the book. Because Bruce and Alfred are mainly the only two we see, no other character from the Bat-family makes an appearance, we don’t even see Dr. Hurt. Sure, Alfred and Bruce can carry an issue by themselves when it is done right, sadly Morrison doesn’t do it that way. There scenes are brief and nothing other than what I have stated really happens with them. I feel like more could have been done here given what Morrison has done before and what we have seen within his current run on the various Batman titles. It seems like Morrison can’t find a happy medium content wise nowadays. It’s either too much or too little content-wise, I don’t know what’s going on in his head but it seems like he’s being overwhelmed, beaten down, and overtly pressured to the point where his work is suffering and it shows in his inconsistency. In either case does it prove a valid case for the matter at hand and if so does it vindicate him? Or should Morrison be blamed for everything and shunned? The answer I feel lies somewhere in between those two extremes. Sure, there is a lot of pressure and criticism for him to write something good, but he should not let that take a hold of his work and bring it down. He’s working on multiple titles, and I can’t imagine that that is easy. Going from story to story, page to page, rewriting, removing things, adding things, meeting different deadlines, etc. But that is not an excuse, to rush through a story just to get it out in time. I’ve been blaming his writing for a couple of reviews now but now I think the problem isn’t his writing, or DC comics, or the due dates. It’s him. He took on more than he could chew, he let the pressure get to him, he turns out these half-hearted stories, and in the end he only has himself to blame because it‘s not DC‘s name that‘s going to get trashed, it‘s his. It was poor planning with an even poorer execution. And what do we get in the end? We get inconsistency which is any writer/artist’s nightmare; to be lauded, then panned. The inconsistency is the Achilles tendon of Grant Morrison’s writing. And it not only prevails but triumphantly defeats the good that he’s done.

The art on the other hand, is nothing short of beautiful. To date, it is the best thing Tony Daniel has done for Batman in my opinion. His pencils blaze through your eye sockets and into your brain where it doesn’t feel like a blow to the face but as a soft pillow that you lay your head onto only to discover it’s covered in razor blades. Truly remarkable, Daniel's Bruce Wayne is the broadest, grandest, most elegant representation of the character I have seen in a long time. The best part is the distinction you see between Bruce and Dick, whereas Dick is a little smaller and has a softer face, Bruce is larger than life and has both the eyes and the prowess of a Bald Eagle. I haven’t seen Bruce like this in a long time and to see him in Daniels’ particular representation is enough to send chills down my spine.

But overall, this issue fails to deliver no matter what I’ve said to praise this issue, it still fails. I can only hope Morrison does a little better next month and that he has committed the time to crafting a story rather than being brief about it. This issue feels half-hearted, rushed, and almost meaningless and it fails to draw you into the story.