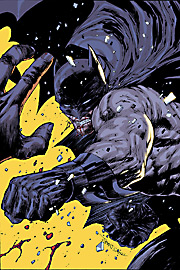 Editor's Note: As mentioned in RiddleMeThis's review, the issue solicited was not the issue released, so the cover art is also wrong due to the incorrect solicitation by DC Comics.

This book came as a surprise. Well, I’ve been reading comics long enough that it shouldn’t have, but the pages of Batman #708 were so different from the previous issues that I had to check the cover to see if I was reading the correct book. It’s a cover with a color scheme that reminds me of Batman #669, and an image that lets me know that Azrael is invading the Batman title. I use the word ‘invading’ because I feel that it is what he is doing and his presence is more of an annoyance than anything.

Now I’ll admit I didn’t finish the Azrael series to the end, so I was a little out of the loop. All I knew about Azrael’s final issues were from the TBU Comic Cast and even then, I hardly paid attention to his parts. Basically what happens in this issue is Dick easily puts away a two-bit criminal and everything is as easy as can be. The cops are happy and Batman is feeling pretty good until he begins to feel a burning in his chest. He had been stabbed through the chest with the “Sword of Sorrows” by Azrael and it was acting up again and giving him a memory attack. By memory attack, I mean that Dick is now plagued with nightmares of his past in the form of visions and dreams and he ends up sleeping all through the day without even realizing it. We see the bat-shaped wound and Alfred is a little worried, but Dick says he’s fine. We then see the Crusader, who’s parading around Gotham shooting arrows and fire. Batman is joined by both Red Robin and Catwoman to confront this wacko dressed up like a wannabe Azrael. As Catwoman saves a baby, Azrael appears on the scene and stops the Crusader before he can do anything stupid(er). There’s a standoff between Batman’s crew and Azrael with the Crusader. As the issue ends, Fireball joins Azrael’s “team” as Batman, Red Robin and Catwoman walk away knowing that Azrael has become a threat and know that they must do something to stop him. Anybody up for some 3 on 3?

Now David Hine’s story was much better upon the second read, but still was nothing spectacular. Once I was able to sort through the confusion I found a decent little plot. He, along with artist Guillem March were able to create the dark Gotham City I love. Now let’s talk about March’s art. Upon first look I rolled my eyes. I’ve loved Tony Daniel’s art on this book and March has a style that is very hit or miss for me. As I continued to read, the creepiness of the art began to blossom and whenever that happens in a Batman book, I’m on board. Gotham should be a scary place, and that is how it is seen in this book. That being said, this book still lands in the mediocre bin with a less than impressive story. Although it’s simply an introductory issue to the crossover, I don’t know how many fans it will attract to follow up in later issues. I will follow this one simply out of curiosity, but we’re talking about a character from a canceled series with very poor sales by the end of its run and now he’s headlining a crossover through multiple titles. Thus begins Azrael’s farewell tour of the Batman universe. Next stop Red Robin with a final goodbye in Gotham City Sirens. Or maybe not, we will see.