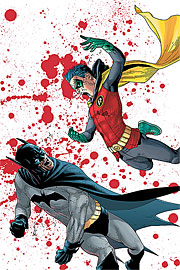 Grant Morrison’s second act of his fourth story arc in the highly entertaining series that continues to shock the fan based with high energy and twists and turns around every corner has come out. The series continues to pick up momentum and Andy Clarke’s artwork does a consistent and satisfying job.

With issue #11, Morrison continues to craft a story full of hints and symbolism. He wants the reader to read between the panels. Morrison also does a terrific job of keeping the reader in check, he continues to reference previous issues in his run on Batman which really rewards the reader who has been knee-deep in Morrison’s run on the character. The issue is splits between Dick continuing to travel through the newly discovered underground graveyard, while Damian joins forces with Oberton Sexton to fight off the attack of the 99 fiends sent by the evil Doctor Hurt. The key to the success of these transitions is that Morrison uses Alfred as the bridge between the two. While Alfred continues to help Dick solve the riddles to the Wayne family, he keeps a close eye on Damian down in the graveyard. The one downfall in the issue is the continuing of Talia’s sporadic control over Damian via the spinal link. I just feel this makes everything more difficult and is unnecessary. However, Morrison incorporates the Dick and Deathstroke relationship that somewhat redeems this rather irritating plot point.

Morrison also brings in the question; who is Oberton Sexton? I will refrain from making a prediction, but I will say, expect the unexpected. Morrison always seems to lead the reader one way and then throw them a curve ball, leading you into a completely different direction. It is one of the techniques that makes him such a fantastic storyteller.

One top of Morrison’s finely penned story, Andy Clarke does a solid job of bringing the script the visual page. While he is no Frank Quitely or Cameron Stewart, there is something simple and refreshing about his style. In a story that is full of complications, his easy going pencils seem to keep you in tune with the epic story at hand. I also feel that Clarke feeds off of Morrison fairly well. The two continue to tell a fast-paced and entertaining story, and that’s what really matters, doesn’t it?

Overall, I think Batman and Robin is continuing in the right direction. The book keeps my curiosity and intrigue like no other current Batman title on the shelves today. Pushing all the mysteries and different possible conspiracies, this is just fun comic and anyone who loves Batman, will enjoy this.