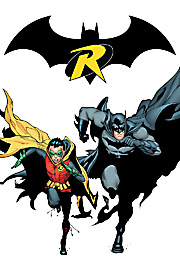 In this final issue of Paul Cornell's story arc, we find all the dangling plot threads weaved together. At the conclusion of last issue, Una was attacking Vicki Vale while carrying a bag labeled Girlfriend Body Parts.

Batman and Robin burst in, demanding to know what Una has done to Vicki. Una assures them nothing happened because the tools are cardboard and the body parts were wet dog food. She begins to become exasperated with Bruce's refusal to see what this is really about. She tells them Vicki is safe, though she isn't necessarily against killing. Batman begins to deliver Bruce's message from the previous issue, but Una isn't interested in hearing it.

Una assumes Bruce is tied up in the more important matters of being a billionaire playboy. Though Batman tries to explain that it isn't like that, Una is having none of it. She doesn't want to be treated by any of the doctors in the city. She insists to Batman there's nothing they can do. When he realizes she's not interested in the conversation and she's just been playing for time, she takes out a nose piece. Batman and Robin both begin to suffer the adverse effects of an unnamed gas. Una finishes the task with a small atomizer of some liquid.

When they awake, they're fastened back to back, each facing some sort of drill. Robin waits until Batman wakes up to inform him that this is his fault. Una explains that in order for them to convey to Bruce how she feels, they're going to need to know how she feels, starting with the gaping hole in her head. Una admits she doesn't know a lot about power tools, but she has a lot of Batmen to practice on.

Once the drills start up, she points out another detail of the trap. The chairs they're on slide back and forth, enabling one of them to drive the drill deep into the other's head. Or, as Robin snidely points out, to push forward and mock her with their death.

Una takes a moment to admire his moxie, before wondering if Batman has the same loyalty to Bruce. Are they all as disposable as she was to Bruce? She continues to talk back and forth with Batman as the drills go closer, taunting him with the assertion that other Batmen won't be there to save him and assuring him that she doesn't want to know his secret identity. No, she only wants him to be enlightened or to die.

Batman has been using the conversation to remove a small blade, attempting to free himself. He continues to conversation, agreeing with her, trying to soothe her. Robin assures Batman that he won't push backward, even as a reflex. With the drills moving ever-closer, Batman asks her if she's really pretending the trap won't kill them, if she's really intent on hurting only because she's been hurt.

Suddenly, the drill bits fail and Una reveals they were only paper-mache. She's surprised, admitting she thought the whole of Batman Inc. would be there to save everyone. Batman and Robin manage to free themselves in time for Una to tell them that everything here was not what it seemed. It was merely a distraction. Batman finally realizes this was a set-up to keep everyone away from the river robbery crew. The next three panels show their corpses in various prison locales, large holes through their heads.

Una's dialogue gets a bit cheesier than normal in the last few pages as she tells Batman and Robin she's enjoyed this but she needs Bruce to keep missing her. With that, she leans out an open window and raises a gun to her head, falling to the ground. On the street, there's no sign of a body, nothing.

Back in the Bat-bunker, Damian and Dick dissect the case. Damian says it's good Dick didn't push back in the trap either. The chemist from the first issue was found in a doughnut factory, which Alfred says proves she's not without humor or mercy. Dick admits that's one of the difficult aspects of the case, because she's kind of correct. Bruce took care, but he wasn't humane. He created a Batman capable of enjoying the job and a Robin willing to die for the cause.

The issue ends with a splash page of Una looking back up at the city with Dick saying that she looked at the heart of what Bruce was doing, without even looking to, and found something missing.

I found this arc to be really uneven. I didn't enjoy this issue quite as much as I enjoyed the last issue, and part of that was that I was already tired of Una as a villain. Her dialogue felt extremely cheesy, especially in the last half of the book. I hope Una is a one-trick pony, resurrected by Grant Morrison's equivalent in 2060.

I liked the art, no issues there. In issue #17, I said Dick and Damian looked just a bit off when they were out of their capes and cowls, but that seems to have been fixed by the final scene here.

I liked the conclusion, the fake death-trap and Una's means of escape. I think the plot itself was a good plot, maybe better suited to another title, but the execution wasn't well-paced. I'm looking forward to what Paul Cornell works on next, now that I have a bit more of a feel for his writing, but I'll be happy to see the reigns of this title handed off to Peter Tomasi.