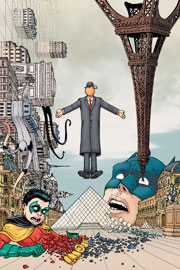 Batman and Robin #26 marks the end of a very short era, an era marked by a different Caped Crusader and Boy Wonder. Issue #26, written by David Hine and illustrated by Greg Tocchini and Andre Bressan, ends the light-hearted Batman and brooding Robin.

Because this is a one-and-done, the issue moves quickly. We open with an unnamed narrator describing his father's home movies of him as a baby. His father informs him he's destined for great things. The narrator says his father made him what is today. As readers, we quickly determine from the scene outside the Louvre, that he's insane.

Nightrunner, accompanied by Batman and Robin, stand outside the Louvre, where people defy gravity and physics, crowding the streets. Batman, providing the exposition, tells Nightrunner he knows where they are, and he knows about the breakout from Le Jardin Noir [the Black Garden, the French equivalent to Arkham Asylum], and about the communication blackout in the area. Batman quickly asks for the escapees names and backgrounds and who broke them out.

It seems an unidentified man, dressed as The Son of Man from a painting by Magritte, appeared and knocked out the staff with nerve gas. He then proceeded to free Sister Crystal, The Id, Ray Man, and Skin Talker. He shouldn't have known about them, as their very existence is classified.

Sister Crystal can turn organic matter to a glass-like substance with her left hand. After a doctor removed the glove that controlled her hand, she turned his heart to glass. Thus, the escape.

As readers, we're in the present, which is forty-eight hours after the escape, and from the background we can see that Paris is the municipal equivalent of M.C. Escher's stairs. Batman determines the pyramid is the focus, but Robin realizes there's another problem. The citizens are beginning to attack. Batman reminds Robin the citizens are not in control of their actions, so they must avoid hurting them. Our narrator marvels that thousands of years of evolution and civilization can be undone in the blink of an eye.

They finally see the inmates, and Nightrunner admits he knows nothing of the Id and Skin Talker beyond the fact that the hospital workers kept them sedated. Batman guesses mind control, and the narrator congratulates him on such an astute deduction. It's not quite correct, as we learn, but it's close.

Id can find out your deepest desires and make you act on them. His skull is glassed over because his lover, Sister Crystal, wanted to see how his mind works. Needless to say, he's been a little unstable ever since. Skin Talker is able to manifest phrases on his skin. Previously, he worked as a fortuneteller, but then his predictions became extreme. It became clear his words were not predictions, but rather post-hypnotic suggestions that harmed the readers. Now, Skin Talker reacts to the phrase "Do what thou wilt", from Id.

You can almost hear the narrator laughing as he remembers the final power of Id. Pheromones that lower inhibition and strengthen primal urges. Sister Crystal beckons Batman closer before Nightrunner intervenes and takes out Id.

Batman, Nightrunner, and Robin can't figure out the motive behind this attack and in their moment of pondering Robin is touched by Sister Crystal, her touch turning all but the upper half of his head to glass and pushing him over so he shatters. Just then, Batman splits in half. Neither he nor Nightrunner can make heads or tails of this, until a man calling himself Paradox flies in. When Nightrunner clarifies who Ray Man, an illusionist who manipulates light to create what he imagines, Batman realizes Paradox is Ray Man.

Batman tells Robin to get up, because he isn't really made of glass. It's all an illusion. They close their eyes and tell themselves it isn't real. After that, their body parts fly back together and they begin taking down the villains. A concentrated shot of Xenon puts Ray Man under and suddenly Paris rights itself. Sister Crystal attacks, but Batman puts her down with riot foam. That's when they discover the cameras.

They crash through the pyramid and discover the man who has been watching the entire time. Before they can sedate him, he suggests keeping a distance, as he has set explosives. He tells them he'll turn around shortly, but that they should watch the screen and be patient.

We see the home movies from the beginning and find out the mother was killed in childbirth and the father, inspired by a Victor Hugo novel, mutilated his child in hopes of making art. Instead, he created The Man Who Laughs, a dead ringer for the Joker. He explains his father wasn't exactly original. When he explains this was all for art, he justifies the deaths by saying people die for all kinds of ridiculous reasons, why not art?

Batman douses him with more of the riot foam and demands to know where the explosives are. The Man Who Laughs, explains the cameras are the explosives and they're voice activated. He says the magic words, "Goodbye, Father" and they explode, leaving everyone safe in the aftermath. Batman asks who he was transmitting it to, and it turns out to be an audience of one. He was transmitting to his father, now little more than a collection of body parts that are technically alive in an exhibit titled "The Psychomantic Improbability of Life in the Mind of Someone Dying" by Norman S. Rotrig. Just as Norman watched his father's movies, his father will be forced to watch his movie movie in a cycle, ad nauseum infinitum. Norman foresees that eventually his father will learn what he learned: there is nothing to learn, and in the end it will all come down to blackness.

It's very clear this story was originally meant to be a larger arc, with more of everything. While my knowledge of the surrealists and their movement is base at best, my appreciation of the homage within this issue stands. On first read, I didn't like this issue. I was disappointed to see Tocchini on it again and I really only knew David Hine from his work on Arkham Reborn. A second, third, and fourth read proved that I had no idea what I was talking about.
The writing is some of the best I've seen since Morrison ended his run. Lately the book has been narrated by the villains and I haven't ever seen a writer get into a villain's head and voice so succinctly.

The titles for each page help the story, particularly the chilling "This is not an orange." The other phrase, used to perfect effect, was "Ars gratia artis", Latin for "Art for Art's sake", titling the page where we learn that death for the sake of art is no better or worse than death for any other reason. At the end, the utter hopelessness of the villain's monologue perfectly wrapped up the story, and indeed the series.

I believe there is no shame in apologizing, so I'd like to apologize to Greg Tocchini for belittling his art work before this. While I am still not a fan of his drawing on Batman and Robin, the perspectives he's able to convey in the panels is absolutely incredible. Andrei Bressan does the last five pages and for this, I'm grateful. The transition happens at an awkward place, but I truly believe he was the best of the two artists for the panels he did. The reveal of The Man Who Laughs, a character from a book that inspired the film that helped inspire the surrealism that inspired the art of these pages, was perfectly executed, and his reveal of his father was even better.