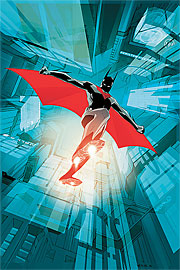 Admittedly, when the Batman Beyond animated series came out years ago I have to say that I wasn’t really impressed with the whole premise and even though just about everyone liked it, I just didn’t see the point. So with the advent of the Batman Beyond comic book mini series on the horizon, obviously, I wasn’t filled with anticipation and excitement . But after avoiding it out of pure disinterest I decided one day to pick up the first issue and give it a quick read through and to my surprise it was actually (dare I say) good. While the entire world is brand new to me, I liked how it started off, with a mysterious figure violently breaking out of Cadmus labs. I was immediately drawn into the story and found myself standing in my LCS absorbing every page, in fact I even read it twice! What really struck me was the completeness of the “Beyond” world. Everything seemed fully imagined and detailed. I don’t know if this is a hand me down from the Animated Series, but I felt that what was on the page was something fresh and completely original. Whether it was the architecture of the futuristic Gotham City or the attitude of Terry McGinnis, it was a breath of fresh air.

So, after reading the first issue and loving it I decided to pick up the second issue. This issue reads very well, it isn’t too wordy and the art is just amazing. Not only does the story pick up where it left off, there is a sense of dread when the newscaster says the word “Hush, and while Hush is getting a little on the staler side it seemed to refresh and erase every misconception I had in my mind. I feel that this issue is a constant race to keep up with something or someone that is always a step ahead of everyone else. Hush is back, although whether or not it is Thomas Elliot remains to be revealed. Hush was supposed to be dead in this future world, according to Bruce he was shot after jumping into a window and startling a woman who in turn shoots Hush, but of course Bruce is too hurt to confirm a kill so the possibility of Thomas Elliot being alive is certainly high. Hush, in this story is seen at the home of James Tate who is also known as “Armory” and who also fought Batman at one time. James comes home after a fruitless job search, as apparently it is hard for him to find a job as an architect because he spent some time in jail. Hush is holding James’ family hostage saying that he has a very special, one-time-only job for James. In the next scene it becomes obvious that James refused the job causing Hush to kill him and his family, using an antique umbrella sharpened to a razor point to commit the murder which in turn implicates Penguin. As Terry listens in on the police at the crime scene, Bruce compiles a list of Batman’s enemies, both new and old while commenting that before this Hush only targeted Batman’s enemies, now he is starting to kill innocent people. But before Terry can check the list out, he is distracted by someone who is trying to break into a Cloudware Data Storage facility, turns out it is Catwoman, who, after being discovered runs away as Terry gives chase. Terry loses her and goes back to the list. His first visit is to Calender Man who is setting arming a bomb intended for Barbara Gordon when Terry disrupts his work. As Terry begins his interrogation, Hush crashes through the window, and says that he’s going to kill Terry.

This issue was a very good issue, I forgot how good Adam Beechen is at what he does. He totally engrosses you with his story while he builds tension through the littlest of things that don’t seem very spectacular or meaningful. There is a sense of dread and despair in this issue, and while it can be done completely wrong, here it is done right. He builds on this doomsday motif, but it feels like it really means something, that it really can happen and that it will happen. It is more than a meaningless jumble of words that will mean something 3 or 4 issues down the line, it feels immediate and like it could happen very quickly. The script is written in a pitch perfect tone, the dialogue flows freely and naturally and most importantly I think he got the voice of the different characters in your head effortlessly. Terry Mcginnis is presented here as someone who doesn’t walk in someone else’s footsteps when it comes to both his general attitude and the way he handles things. He flourishes in the Batman Universe, by not becoming Bruce’s Batman, he is his own character and not merely a hastily put together flawed mirror of Bruce. He is distinct in the sense that he is like Nightwing. Sure, he is guided by Bruce, and while he is in the Batman Universe, he can become his decisions and semi-follows his own guide and natural instinct. But when you look at the larger picture this series, so far, has been consistent with it’s storytelling and progression. Adam Beechen isn’t being lazy , he is giving his characters that little piece of extra detail that makes them flourish which helps them believably exist in this future Gotham.

The artwork by Ryan Benjamin is rich in detail. Whether it’s Bruce’s wrinkled face, or the beautiful architecture that Terry and Catwoman fly by it is all well drawn. Benjamin’s art like I’ve said is detailed, but what truly is amazing is the feeling you get when you look at it. Yes you see the futuristic Gotham, with it’s broad buildings and advanced technology, but it also has a hint of the old Gotham, Bruce’s Gotham. They both blend into each other to create an unclear picture which at it’s best points mold into a great new background. The best scene however, is when Terry is chasing Catwoman, it literally feels like their flying and bouncing off of things, the angles are unusual and they really make your eyes spin and your brain search for the real picture. That scene is only made better by David Baron’s colors. He uses the right colors at exactly the right time, like in the aforementioned scene with Terry and Catwoman, the orange and red is majestic as they soar through the sky. Also Baron’s colors work in the scene where Bruce is recalling his final showdown with Hush, the picture is unclear and hard to look at, there is a lot of black and blue, and you really need to search out what’s happening, but so is Bruce, as he’s trying to remember these things, if that was it’s true intention it was done both artistically and with a sense of realism as the past gets vague as we age.

The issue as a whole is a really great read, if you are looking for a good, intriguing story with great art, this is the one for you. Although I initially had my doubts this is really well written and Beechen shows us he is at the top of his game.