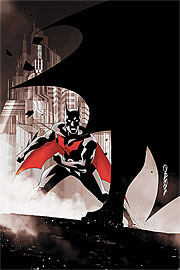 We have now come to the half way point in this Batman Beyond tale. How is it holding up? Let’s take a look.

We pick up where issue 2 left off, with Batman face to face with Hush about to kill Calendar Man. Terry starts an inner monologue about how tired he is, and the Hush case is not helping matters. During the fight, Hush reveals that he knows Terry isn’t Bruce and calls Terry a “faker”, Terry also doesn’t check in with Bruce which makes Bruce threaten to shut down the suit. McGinnis gets taken out, which gives Hush enough of an opportunity to finish killing Calendar Man and takes off.

Terry and Bruce then argue about Terry’s commitment to the mission of Batman, and Terry has heard enough so he breaks off the com link and goes home where he hasn’t been seen regularly.

We get a quick scene featuring Amanda Waller and Dr. Reid at Cadmus where Reid wants to talk to the police about Cadmus’ role in the Hush killings, but Waller warns against that, implying that certain things will apparently lead back to Reid if word about Cadmus’ involvement were made public.

We then see Terry in separate scenes argue about what he’s been doing with Wayne that has him keeping strange and long hours with his mother and kid brother, as well as girlfriend Dana.

Terry then goes to the Bat-Cave to confront Bruce, and finds that Bruce has been working on an army of what Bruce calls “Bat-Wraiths” which are giant, robot versions of Terry’s Bat-Suit. Bruce explains that he is starting to doubt Terry’s commitment to the mission and wants to have an army that he can control. Terry then whines about how once Bruce told him that he had complete faith in him. Bruce explains that since he feels Terry is still undecided about what he wants to do, the Wraiths are a backup for Terry, to which Terry replies that he doesn’t need back up and he is turning in the suit as soon as he brings in Hush.

Terry then goes out to do some investigating. He starts with Tim Drake, who assures Terry that there has been no residual effects from the destruction of the microchip that The Joker had implanted in him in the events of the movie Batman Beyond: The Return of The Joker (as a fail-safe, in case Batman saved the day after kidnapping Robin, Joker implanted “himself” in a microchip and would slip into Tim’s body from time to time after being killed, by Tim in the “flashback” sequences. The chip got destroyed by Terry, making sure Tim would no longer be haunted by The Joker). And as a fail-safe Tim has a 24 hour body cam on him to ensure that his activities are on the straight and narrow, Tim also advises Terry to pay someone else a visit with intimate knowledge of Bruce Wayne and Batman, but warns that he won’t be as welcoming as he was.

Terry, on his way to meet with whom Tim said to meet gets into another tussle with the new Catwoman. Terry tries to tell her to keep a low profile, to which Catwoman responds by telling Terry to leave her alone and runs off.

We then see that Terry is looking for Dick Grayson and tells Dick that he’d like to chat with him.

Catwoman then is seen telling Hush that a tracker has been put on Terry, so Hush can’t be where Batman will be, until Hush is ready to meet him again. It is then revealed that this Catwoman isn’t Selina Kyle. The issue ends with Hush trying to kill Catwoman after giving her a payback, which turns out to be playing cards and an ace card falls to the ground, for putting the tracer on Batman.

As a story this issue wasn’t bad, but a few things seem to be nagging at me.

First, Terry mentions that Hush has targeted both his and Bruce’s old foes. Thing is, we’ve only seen Hush target old Bruce Wayne foes, and we’ve only seen one foe from the Batman Beyond television show, and Hush had nothing to do with that initial scene of the first issue.

Second, now we know this issue takes place after Return of The Joker which timeline wise falls in between the first two seasons, but from what I’ve heard about the show (I’ve seen maybe three or so episodes and the movie), at that point Terry was firmly committed to the mission and Bruce had complete faith in him as a junior partner. The show would no longer have moments where Bruce and Terry fought about dedication to the never ending war on crime, nor would Terry complain about being tired and lack of a social or family life. Yet we see that tension here, and if this was in the middle of the show’s run rather than being after the show’s run, one would think Bruce having an army of giant Bat-Wraith robots would have come up, and Terry wouldn’t explain away his actions as “rookie mistakes.” That makes this book seem kind of like a bad television show remake which takes generalizations about the show and builds the movie (or whatever) around them.

Also, despite the introduction of Tommy Elliot’s history in the last issue, I’m still wondering if this is going to be put into actual continuity (as seen within the pages of Batman # 700) or not. For instance, if we are to believe the Hush seen is actually Tommy (whom Bruce thought had died long ago in the last issue), it would have been nice for Beechen to bring up the Elliot/Kyle relationship that has been in various satellite Bat-Books for a few years now. Also I’m a bit intrigued by the use of playing cards and the fact that a half Joker face appeared when Tim Drake was speaking with Terry. I doubt it could be The Joker, whom despite his actions and demeanor as Oberon Sexton in Batman & Robin, Joker usually is a madcap kind of fellow who wouldn’t be so serious (ummm, pun not intended) of a talker as we’ve seen Hush be in this series. Especially considering just how madcap the character always was in the various Timm-verse cartoons.

I’m still intrigued as to where this series is going, and what will be the result of it in terms of bringing Terry McGinnis into the DCU or making this a separate “Earth” but because of the nagging thoughts.