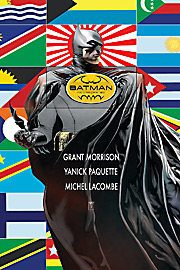 Alright, what we've all been waiting for…Grant Morrison writing what he said he wanted to do since he began, Batman Inc. However, is the comic worth the hype? Let’s take a look.

We start off is Mr. Unknown sitting in a dark room, with a voice coaxing him to wake up. When he does he finds that his hands are melting. He looks up to see a skeleton called: “Lord Death Man", this guy smacks Mr. Unknown in the face and it appears Mr. Unknown's face explodes. We then cut to Japan were a guy open the door to a warehouse. He then walks into the place where Mr. Unknown is being held, and is terrified to see the skeleton and its henchmen, next to the dead corpse that is Unknown. The guy rushes out, and the skeleton tells his henchmen to find him. We then cut to a nicely penciled splash, of Batman and Catwoman, crawling down a rope. Catwoman asks Batman why he is here and Batman responds he doesn't want the technology there to fall into the wrong hands (because that hasn't happened before). When they arrive at the bottom, Selina notes there is security there; Batman simply waves it off as the men start to float. Batman tells Catwoman there are invisible robots in the room, but Batman is already way ahead of it with heat sensing lenses. While Batman proceeds to take out the robots Catwoman goes for the diamond, but a robotic mouse rises from behind her. We cut to a news report that says Bruce arrived at Narita with a woman (Selina). We then cut to Selina watching the TV. She goes into Bruce's workout area asking how he got the suite; he simply says he owns the hotel. Selina asks Bruce about the diamond in which he says it is safer with him. He then says that he here to train a Japanese Batman and Selina says she will tag along. We cut to Batman and Catwoman going to the comic store that is Mr. Unknown's hideout (shout out to all of us comic fans); they go down to his “Batcave", where they find it in shambles. They are then attacked by a group of henchmen and hey easily take them apart. Catwoman, questions one of them, why the skeletons attacked them, the henchman says they were waiting for the kid, (the guy from the beginning of the issue). We cut to the kid, going into his apartment, where Lord Death Man has his girlfriend hostage, the kid however, shoots the lord death guy, and he falls out the window. Almost immediately the girl drops into the ground, and Catwoman goes after her and in a classic 60's batman cliffhanger, there is of course an octopus at the bottom of the tank.

I really liked this issue, I felt it was fun, and the story is interesting. I might just be happy that Bruce is back but, this series really feels like what Grant should have been doing from day one. The art is great and overall a must read.