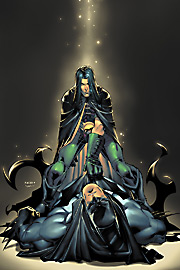 Batman Orphans part two opens exactly where part one left off. Bruce is suffering the effects of the fear toxin, still envisioning his parents being gunned down in a filthy alley. Unfortunately, Samantha Locke is on scene to see the whole thing happen. In his vision, Bruce is dressed in the Robin outfit and Samantha is playing the part of Joe Chill. He begins to attack her, before Sam Jackson fights him off.

Fortunately, Alfred intervenes and takes Bruce away, though not before Samantha exposes the attack as a story for the National Whisper. We check in with the orphans and see that Francisco is unhappy with the effects of the venom on his system, going as far as to almost attach Troy before Monica comes into the room and offers to calm him down. It seems the calming down is going to be happening horizontally but the alarm goes off.

Monica and Francisco seem to bond momentarily before running to join Batman. He chides them for being late, wanting them to break the habit before it breaks them.

The group heads out and we go check in with Renee and Crispus, talking about the FedLex shipment that everyone seems to be after. Reports come in of multiple attacks at FedLex stations and the two make their way into Bludhaven.

Meanwhile, at Arkham, Sam and Samantha try to get in to see Dr. Ignaff, following up on a hunch that somehow the hospital is linked to the disappearing children. Sam is in a lousy mood, aware that the black man never makes it out of situations like this alive. While they're waiting for the doctor to come see them, an alarm sounds and the two orderlies at the desk make tracks to discover its source. Samantha uses this as an opportunity to fish through the computer files.

Inside the office, Dr. Ignaff is speaking with Bruce and Tim about a worker at Bruce's corporation, and his young son. They have Tim pretending to be Tom, a boy who has recently lost his mother. Dr. Ignaff tells Bruce it would be best if he could treat both the father and the son there, as it shows them a larger world view and the true value of family. Bruce notices a picture of Dr. Hugo Strange on the wall and inquires. It seems Dr. Strange was Dr. Ignaff's mentor, something Bruce seems shockingly blase about.

Out in the waiting room, Samantha seems to have stumbled upon a file relating to Francisco, when she is interrupted by Dick. He charms her with compliments about her work and her talent. Just then Bruce exits the good doctor's office, and Samantha is up in arms about how he should be locked away. She hands a disc to Tim, and the team is off, following Dr. Nigaff. They assume he's off to tell Dr. Strange there may be a new recruit for Robin. As they drive, they get word there's another FedLex hold up.

We arrive at the FedLex station before the Bat family, only to see Merlin and Red Talon breaking in to the depot in search of the mysterious package. Soon, it's a free for all with street thugs, Crispus and Renee, and The Riddler joining in. The last to enter are the orphans, driving what can only be described as a tank.

Troy jumps out of the tank, trying to get to the package, only to be followed by Lance. Unfortunately, Lance gets more or less incinerated the second he pops out. Bookworm in the corner reminds them to listen when someone says Heavy Fire. Monica goes out to attempt to get what they're there for. Unfortunately, Firebug manages to light the building and himself on fire.

Merlyn explains it all to us, it seems Bookworm was teamed up with his brother, and the airport job from the last issue was theirs. Bookworm waits for Merlyn to die before taking the tank back to the Bat-Grotto.

Renee and Crispus engage the villains in a gun battle, but the ammo runs out. Fortunately, Batman, Robin and Nightwing appear in a two page spread, kicking ass and taking names. Oracle checks in and lets Batman know the Birds are helping out across the city, since his isn't the only position taking fire.

We're back to Samantha and Sam, who are wondering where exactly Batman went. She followed Nigaff back to his rendezvous point after Batman, Nightwing and Robin got called off to go to the FedLex depot.

As they move around the building they saw him enter, they trip and stumble down a trap door and land right at Fake Batman's feet.

Back at the FedLex depot, Crispus begins interrogating Merlyn about who exactly started the gun battle. Merlyn reveals the package has a tracer on it and Talia promised him help from The Detective. They trace the package and head out.

Monica and Francisco are on their way back to the Bat-Grotto while taking fire from another vehicle. At the Bat-Grotto, Sam and Samantha are being led around by fake Batman, along with a new group of orphans. They see the chaos all around Gotham and realize this fake Batman started it all.

Bookworm appears and Batman excuses everyone else. For the second time this issue, Bookworm uses whatever was in the FedLex box and zaps fake Batman. Batman tells Bookworm he's earned his reward, though he was expecting Francisco to earn something as well. Francisco and Monica appear, hopped up on venom and ready to take their revenge. As they dispatch Bookworm, fake Batman realizes there was a tracking device on the package and they've been followed.

We cut to Batman, Robin, Nightwing, Renee and Crispus realizing the signal is dead. Batman disappears and the next panel shows the fake Batman disappearing from next to Francisco. Batman reappears in another part of the Bat-Grotto and orders the orphans to put Sam and Samantha into the lower level, where the containment cells are.

One of the orphans expresses concern over putting them into the containment cell with "him." In the next panel, it's revealed the person in question in Dr. Strange, claiming to be Batman.

Francisco has made his way back to Monica, and watches as she dies in his arms after he assures her that the good guys win. The orphans and Batman watch this scene before he orders them back to the containment cells. Francisco turns and begins to attack Batman. He's going to make sure he doesn't hurt anyone else, ever.

Fake Batman stands on a ledge where Robin unmasks him as Dr. Nigaff. They don't have a lot of time to process this, as Crispus announces they have company, all looking for that mysterious box. They begin to make their way to the lower levels, before Robin realizes Francisco is beating up Batman a level down.

Robin tries to talk some sense into Francisco, showing him what's going on below. All gangs are converging, wanting what's in the box. Seeing what good Batman can do, Francisco puts him down and then proceeds to breakdown. Robin introduces himself as the real Robin.

Downstairs, Nightwing is preparing to give everyone what's in the box. But of course, in the final nod to Tarantino with that plot line, we don't get to find out what was in it.

Instead, we cut immediately to the aftermath. Because of the effects of the venom, Francisco doesn't recognize Tim as Robin, and he's getting help from Tom in coping with his loss. Bruce expresses how excited he is for the chance that with the right guidance, a generation may come that will be able to do what Batman does.

And that brings us to wrapping up the final scene, Sam and Samantha finally getting to move up in the journalism world and starting to grow up.

So. Orphans Part two. After finishing this issue, I do have a couple complaints. The art style and amount of dialogue make this book difficult to follow. I liked the plot, so I was willing to put in the time to tough it out and follow. As I said before, I'm not a huge fan of this art style, and for something in the really near past, it made Tim look an awful lot like he was about eight years old.

One major point in this story's favor was the fact that they didn't make Samantha a love interest for Bruce. Too often, the female character is just an arbitrary love interest for Batman, and that's been done to death. A second point was the dual Tarantino allusion, with the mysterious parcel and with Sam Jackson quoting Ezekiel 25:17.

Overall, not my favorite mini-series, but still pleasant.