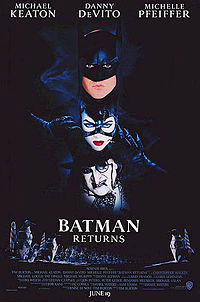 When Tim Burton was tapped for the second Batman film, he spoke with Michael Keaton and they both agreed that they had already discovered everything about Batman, with the first film. The studio persisted, and Tim's itch for Gotham had clearly not left him. And the result is a much darker Batman than even the first film captured.This one broke new ground that most Batman films still have not. This is a unique interpretation that cannot be duplicated. Tim Burton’s visual style and his ability to manipulate the set of his film is evident in every frame. Michelle Pfeiffer even said that she often got lost on set due to buildings being moved, or broken down to make way for new set pieces. Tim Burton is a mad genius, and thankfully, he lent this to what is arguably the least sane member of the Justice League. Our beloved Dark Knight.

To reiterate, this interpretation is based around the idea that Batman is, and admittedly so, insane. As Michael Keaton said in the first film, “Hey, I don’t know what to make of this sometimes.” He knows he’s crazy. But he does it anyway. Excellent. Keaton falls seamlessly back into the cape and cowl and does it by accentuating all of the greatest parts of the character that he captured in the 1989 film. The use of his eyes and how his gaze almost pierces through people throughout is something I’ve always enjoyed. Another is the sparseness of his dialogue when in the Batsuit.

He does not go on to make long drawn out speeches (something I admittedly dislike just a bit in the Nolan Batman films, though easily forgiven). He barely says much as Batman. Short, sweet, to the point. He is direct, as the Penguin points out. Most importantly, Bruce Wayne is still the same awkward, odd, and uncomfortable man that he was in the first film. As the opening scene with Keaton shows (when he’s sitting in the dark in his study and Bat-signal gets reflected into the study directly on him), he’s not himself until he’s Batman. Then, he truly knows who he is and what he needs to do. Michael Gough, of course, reprises his role (for two movies following this one, as well) and plays the light humor well. The fatherly uncle who tries to talk sense into his obsessed nephew, this is the relationship best represented by Mr. Gough.

Michelle Pfeiffer’s Catwoman is incredible. Incredible! The film begins with her as a mousy version of Selina Kyle. For those of us who remember Frank Miller’s Batman: Year One, Selina was tough as hell, and also a prostitute. A typical depiction of women that Miller persisted with in his Sin City series (a must read!). Burton decided to go his own way and reinvent the Catwoman mythos. She is now a secretary, to the “odious” Max Schreck (played brilliantly by Christopher Walken). Her story is very much about empowerment, and that empowerment among a male-dominated film. She is the only female lead, and all other female cast members are only in supporting roles, and very limited at that.

Pfeiffer’s transformation scene after being pushed out of her boss’s office window is chilling. There is no other way to describe it. She’s just laying there, seemingly dead, and suddenly a score of cats just swarm and begin licking and biting at her. Her eyes flutter erratically, and suddenly they just open. It gives me chills every time, and even Tim Burton commented saying how chilling it was to him. This from the guy that made Sleepy Hollow. Seriously, that’s saying something. Also, Ms. Pfeiffer performs the greatest freak out scene ever. And it is the culmination of her transformation. Upon hearing a message on her answering machine from the very company she works for, she just freaks the hell out. I mean crazy freak out. She tears apart her apartment and then she sends all of her stuffed animals down the garbage disposal. SHE KILLS HER STUFFED ANIMALS! How nuts is that?! That’s pretty crazy, Bat-fans. She then proceeds to knock out the letters O and T on a neon sign that says, "Hello There". It now reads, "Hell Here". The scene ends with her sewing together her costume for the duration of the film. A brilliant black latex that also represents her split personality and her own madness with the erratic stitching across the entire garment. She easily could’ve gotten an Oscar for this sequence alone. Thank you, Ms. Pfeiffer. We all still think you’re the sexiest, craziest, Catwoman ever. Cheers.

Now on to Mr. Schreck. Christopher Walken’s character does not even exist in the Batman mythos nor does he exist in DC Comics. His is a totally original character that plays both Catwoman and the Penguin with a great disdain and cynical humor throughout. Every time he delivers the line, “Let’s make a mayor!” I burst out laughing (given that DeVito has just bit a consultant’s nose causing it to spray blood everywhere). This is the dark humor that every other Bat-film lacks, and is the main reason this film was so good. And yes, it is in part thanks to Mr. Walken. Max Schreck is an industrialist who has risen to the top of Gotham’s elite through any means necessary.

He is mean, sadistic, and evil as hell. And he should be considered one of the leading antagonists of the film. Which is interesting, as Batman/Bruce barely acknowledges him as a threat (probably because he knows there’s not much he could do that Bruce couldn’t fix, because, he’s the Batman!). Max’s ploys at controlling Gotham through the power plant he hopes to build to leave to his son causes him to kill Selina, only to have her return as Catwoman, and to betray the Penguin which ultimately leads to his demise at the hands of Selina. A brilliant over the top performance worthy of a Batman villain. Well done sir.

Now for what I consider to be the best villain performance, next to Mr. Ledger’s, of any of the Rogues’ gallery seen on the big screen: Mr. Danny DeVito as Oswald Cobblepot/The Penguin. DeVito was said to stay in character for nearly all of principal photography even when the cameras weren’t rolling. He completely fell into the role, and as Burton revealed, was the only choice for the role. His Penguin has had an incredibly hard life. Abandoned by his parents, and yes that was Paul Reubens (Pee-Wee!) and Diane Salinger who also starred in the Burton-helmed Pee-Wee film as Simone the waitress, Oswald grows up amongst other “freaks” as he consistently refers to himself in the circus. He eventually becomes a crime boss living in the sewers and the abandoned Arctic World amusement park in Gotham.

The opening sequence to the film tells this origin and is one of my favorite sequences in any Bat-film. It’s chilling, tragic, and gives you a sense of what it’s been like for him throughout his life. Hence his vengeful nature and his plot to kill all first-born wealthy sons of Gotham. The subtle nuances and little things that DeVito brings to Oswald are comparable to Heath’s Joker. The sounds he makes, belying his animalistic nature. He lives in cold, and prefers it to warmth. He has thus become accustomed to the cold, and is thus a cold individual as a result (physically and emotionally). Also, his waddle is impeccable. Oh, and the use of the umbrellas! One of his final lines, “Oh, shit! I picked the cute one!” Again with the dark humor. And nobody played this up better than Danny. Yet, the best scene may be between him and Batman. “You don’t really think you’ll win do you?” he asks Keaton. To which Keaton replies, “Things change.” They don’t say more than five or six lines each in this short scene. But the rivalry is instant. His disdain for everyone in Gotham is in every look, every movement, every bit of dialogue. I applaud Mr. DeVito for just going with it. He was not afraid to completely become Oswald and this is what makes him a great actor and played a great villain. Bravo!

Overall, this film has everything. The script is solid and not overplayed, and it broke new ground with characters we’ve seen a million times in comics and television. Top-notch acting, this film is more of a character study of Batman, Catwoman, and Penguin than it is a Bat-film. It delves into the darkest side of Batman himself, and his most vulnerable side. This, and the 1989 film, can never be duplicated. They are pieces of art and should be appreciated and respected. And of course, it all plays out to one of the best film scores made. Danny Elfman is a master and his themes for Penguin and Catwoman, and Batman as well, are incredible. The movement of them tell the story as well as the film does. Brilliant. This movie is now a classic.