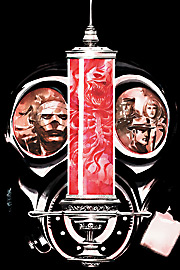 What’s that noise? That’s my opinion of Batman: Streets of Gotham backing up. This one issue was enough for me to take a complete 180 degree turn on this book. What we have here is an issue made up almost entirely of one flashback. Before the flashback begins, Paul Dini gives the status quo of the rest of the players in the current story. Batman and Catwoman escape from the police who were apparently deployed because Bedbug had set Batman up. After his trap fails, Bedbug sulks off to his hideout and decides to lay low for a while. Exit Bedbug. Jumping to Hush, it is seen that he has decided to take Jeffrey Carter hostage after using him to gain access to Wayne Tower. We then get a look into the past, as Dr. Death tells a story about when he first dealt with Judson Pierce. It was many years back and Dr. Death was attempting to spread a toxin in the city, but his scheme was thwarted by the JSA. That pretty much wraps up the issue, which is disappointing because nothing has really changed.

There are so many problems in this book. First off, what is the deal with Bedbug? The inclusion of him at the end of last issue made it seem like he was going to be a major character in these chapters of the story, but it turns out that it was merely a gimmick to create some sort of pseudo suspense. The other problem (other than the lack of any progression of the story) was the use of flashbacks. These looks into the past have been very well done in recent issues and I have commended Dini on that fact. This time we get a semi-interesting, but not completely relevant flashback that should have lasted no more than a few pages. Instead, it turns out that this is nearly the entire issue. There is no need for this and the only reasoning I can think of is padding. They must not have enough story to fill another two books, which really goes back to the lack of effort being put into this title. Everything that happens in this book that is relevant to the plot has been telegraphed and is in no way surprising, and once again we are left in nearly the same point of the story from the beginning to the end of the issue.

I believe I have already discussed my concerns about the pacing of this story, but I felt it was only a minor concern before. That was with the assumption that things would pick up here. Unfortunately, this book is still moving at a snail’s pace. It’s literally going nowhere and there are so many pieces to this puzzle that need to get wrapped up in the next issue. How many things are going to have to be squeezed into issue #21? I highly doubt that the transition of pace will be a smooth one. If Dini is able to fit a halfway decent conclusion to this story in one issue, I will be amazed. Otherwise, expect a confusing, anticlimactic send off for Batman: Streets of Gotham, because I honestly believe that these past couple issues have really set it up to be a massive train wreck.