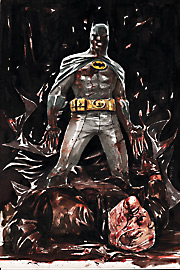 This month, Batman: Streets of Gotham and its storyline “House of Hush” reach their conclusions, and if I had to choose any issue to leave on it would be this. The action is visceral, the plot twists are jarring, and there is limitless proof of the creative team’s outstanding abilities. It’s a shame that these qualities were missing from the majority of this arc’s run, a situation that was only magnified by the sheer volume of filler and interruptions that stretched this story out for 9 months. At the end of this review I’d like to take a look back at the series as a whole, but for now let’s dig into the plot of this issue:

After betraying Doctor Death at the end of the last issue (no shock there really), Hush begins to systematically clean up the loose ends of his latest scheme to kill Bruce Wayne (read: shoot all of his allies and use his hostage as a “human shield” to make his getaway). This plan falls apart though when it is revealed that Hush had the misfortune of choosing a hostage that had already been the victim of another member of Batman’s Rogues Gallery. Jane Doe reveals that she had already murdered Jeffery Carter and assumed his identity and quickly turns the tables on Hush by taking him prisoner. Not realizing that Hush is only masquerading as Bruce Wayne, she rips his face off and plans to use it to facilitate her escape from Wayne Tower. Before she has the chance to finish Hush off though, Batman arrives and disposes of her and puts an end to any hope Hush had of finishing his plans. In a final act of grim irony, Jane Doe’s attack has permanently maimed Tommy Elliot. He can no longer masquerade as Bruce Wayne or even himself anymore. He must always wear bandages on his face. He will always be Hush now.

There is an additional plot line as Judson Pierce struggles to hang on to his life and succumbs to flashbacks about the last time he dealt with the Elliot family. In these flashbacks we see the end of his plot to seize control of the slums of Gotham as Sallie Guzzo sells him out to secure his own freedom. In the present, Judson is exposed Doctor Death’s toxic cocktail, which somehow manages to cure him of his cancer and transform him into a withered, but violently strong, metahuman. There’s something darkly comic about watching one of Gotham’s old school mobsters join the ranks of Batman’s superhuman adversaries, a joke Judson seems to appreciate. While this is all satisfying enough on its own, the real gem of this plot line is seeing what happened to the young boy we’ve been seeing since issue 17. While it’s never explicitly stated, it is heavily implied that the same boy who helped thwart the mob’s plans for Bruce Wayne’s parents grew up to become the Joker. It’s not obvious, but go back and read issue 19 again. If you look at the dialogue between Guzzo and the boy and then Joker’s taunts when he kills Guzzo, they’re eerily similar. This plot twist is great for many reasons. It’s subtle enough that it doesn’t steal focus from the main plot, sad enough to hit you in the pit of your stomach, and it shows Dini’s ability to plan ahead. In the four issues this child appears in, you never see the reveal coming until the very end. What tragic irony, that the boy who saved Batman’s parents would grow up to try killing him on a monthly basis.

Dustin Nugyen and Derek Fridolfs deliver as always on art duties. While the plot doesn’t lend its self to too many elaborate pages, they manage to fit in some striking images. Like all the details the put into Judson Pierce’s withered, new body or Hush’s raw, dripping, skinless face. Dustin’s cover for this issue isn’t as breathtaking as last month’s, but it is still striking. I especially appreciate how he gives a real sense of weight and bulk to Bruce’s body when he’s in his Batman costume. Ultimately I think my only complaint is that the muddiness of the cover’s colors makes the whole image a little too dark to really catch the eye.

Before we wrap up I’d like to talk about this series and some of its high points for me. If it served any one purpose it was to continue Dini’s work in Detective Comics and, more specifically, the “Heart of Hush” storyline. This is obvious at both the beginning and the end of the series with its heavy focus on Tommy Elliot and his deranged need to avenge himself against Bruce Wayne. Honestly, that suits me just fine. Heart of Hush was my first foray into Detective Comics and it holds a special place in my collection. I also appreciated the introduction of Collin (a minor character from “Heart of Hush”) as Abuse, who operates as something of a cross between the Hulk and Captain Marvel (he’s a preteen who can grow into a super-strong, adult-looking giant). As a hero he’s pretty hokey, which makes sense for a superhero persona created by a kid, but what I really appreciate is his friendship with Damian. Their relationship is one of the few things that really humanizes Damian in this series and provides some great character moments. Probably the best moment was when Damian was checking on Collin after their fight with Zsasz. After Collin reassures Damian that he heals fast as Abuse and that the reason he’s wearing most of his bandages is because he thought “they looked cool,” all Damian can say is, “I guess that’s… Good.” The juxtaposition between the two kids is both funny and telling, and it’s one of the few things that I wish would be carried over into Damian’s other appearances in the comics. I’d also like to point out that Dini manages to work in a lot of very dark themes into this series without it becoming cheap or salacious. I mean, did you really think one of the founders of the DCAU would tackle issues like child prostitution, child death matches, or fat men getting eaten by hyenas? God knows I didn’t.

It’s a shame that with all of these good elements that series ultimately delivered lukewarm results. If I had to attribute it to one factor, it would be the erratic and inexplicable guest writers that would appear in the middle of Dini’s story arcs. The Zsasz storyline suffered from this the worst by far; it was interrupted twice by two-month long side stories. It’s hard to maintain suspense or interest when you keep jerking around your audience with distracting interludes. I don’t know what caused all these story breaks, and I’m not going to try and guess, but I truly wish that this series had stayed more focused. It could have saved its existence.

I’ve forgotten too much of the series to give Batman: Streets of Gotham to do it justice and give it an overall score, but to its final issue I give an unequivocal: