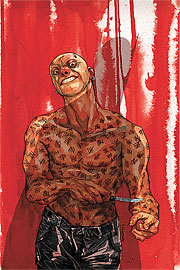 "I once was lost, but now am found". This familiar lyric from the gospel classic Amazing Grace came to mind as I was reading Streets of Gotham #4. When fans heard that Paul Dini would be helming a title that was going to explore the under belly of Gotham and the characters that fuel its engine, we were instantly excited by the possibilities. Then came the first three issues, and the clear direction we were led to believe in was non-existent. What we were given instead was none too different than Grant Morrison's B&R but without the style and execution. There were hints of what could be, but mostly the writing and the art were inconsistent and unfocused at best. The fresh idea its title implied was lost from the beginning. But just like the hymn, Paul Dini finally found his way!

Streets of Gotham was my favorite Bat-book of the week. This is all the more surprising since Batman & Robin #4 came out on the same day. Paul Dini has finally delivered on the titles premise: a relatively standalone story that brings us down to street level and intelligently explores an otherwise unknown but essential key to the workings of the Gotham underground. How many stories have you read or tv episodes have you watched when one of Batman's arch villains is somehow set up in a swank new hideout? Lots I'm sure. Have you ever wondered how these criminals find their perfectly suited lairs of crime? Well, Dini explains it by introducing us to The Broker. He is the Switzerland of real estate agents; give the client what he wants, but never ask questions, and never get involved. Ignorance of the criminals’ actions allows him to provide the perfect venues without questioning his own morals. Whether it is for good or evil, he remains neutral. I just loved the way this character is developed throughout the story, and how Dini has him interact with small time crooks like Warren White and big time villains like Mr Zsasz. You could feel the tension emanating from every panel. Dini really delves deep into the character in a very short time. We learn his motivation, why he takes the neutral approach, and what he values.

My favorite moment is the interrogation scene with Batman. First, Dini just nails the voicing for Dick Grayson. In the classic tradition, Batman knows the Broker's identity when no one else does. The Grayson side appeals to the Broker's sense of morality, but when the Broker won't budge from his motto of never getting involved, never making it personal……well to quote Batman; “It is now". The final panel of the Broker bloodied in his chair, but accepting that his beating is the price of doing business, was brilliant.

Dini doesn't ignore the past few issues either. The first two pages are a prelude to the beginning of the story, showing Hush's status as Bruce Wayne. This scene, while amusing because of the Creeper, and necessary for continuity sake, was my least favourite part of the book. From then on though, it is one of the best plotted comics I have read in weeks. The Zsasz story line is moved forward, yet we get an interesting and intelligent look into the life of one of Gotham's unique players.

Visually, this was Dustin Nguyen's best Batman work so far. His almost Picasso like angular style continues to be a love it or hate it proposition. But for those who have a taste for it, he really delivers. The story's opening page of a homeless boy in front of a children's shelter is one of the moodiest and sensitive pages I have ever seen him draw. His Batman is menacing, but still different from Bruce. His facials are more detailed and the characters move much more fluidly than in the past few issues. I still think his male faces are too similar to one another, and Robin's legs are too dis-proportioned, even for Nguyen's strange take on body shapes. But the art really brings Dini's world to life. You couldn't ask for anything more. The cohesiveness between author and artist is as seamless as Morrison and Quitely.

We love Paul Dini because he understands the pulse of Gotham City. As much as any recent writer, he has created new classic characters and taken old favorites in unique directions. His first few weeks of duty on Streets have been surprisingly less than stellar. The fans were worried he had lost his touch. However, not only did he remind us of why we love him, he gave us a great new character and did a complete 360 with an instant classic. In one issue, he transformed a title destined for insignificance and made it a must pick up. Thanks Paul, we missed you!