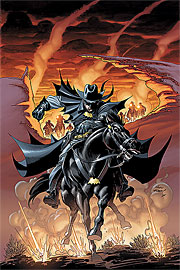 The final sentence of my review of BATMAN: THE RETURN OF BRUCE WAYNE #3 for THE BATMAN UNIVERSE addressed my low expectations for #4. The announcement that penciler Georges Jeanty would replace long-time Grant Morrison collaborator, Cameron Stewart made me ultra-nervous. It was clear from Stewart’s statements on the matter, that he was not comfortable with the tight deadline attached to the issue.

The story begins with the vicious assault of an Old West family by a crew of pistol-packing cowboys. Once they’ve hanged the family’s patriarch, the band of thugs completes it’s task of stealing the bat-adorned, casket-like box seen in the previous issues (killing a young boy and kidnapping his sister in the process). It’s here that a duster-clad Bruce Wayne shows up to answer the recent widow’s pleas for an avenging angel.

The following pages feature a panoramic splash of Gotham from a distant past. Reading this, I had an image in my head of some DC editor holding a gun to Jeanty’s head and screaming, “FASTER! FASTER!” While Jeanty is able to capture the atmosphere of this era’s Gotham, that’s about it. The figures are nothing more than unidentifiable shapes. And beyond the immediate foreground, the store fronts are equally void of detail. It’s on this page that we see legendary bounty hunter, Jonah Hex for the first time. Looking more like a surprised rodent than a feared gunslinger, Hex’s appearance isn’t a memorable one. Next we meet an equally un-intimidating Vandal Savage. As the financier of the mission to retrieve the Bat-box, Savage bears little resemblance to the barbaric leader of the Cro-Magnon Blood Tribe.

Savage details the job for Hex (omitting the fact that a man identified as Dr. Thomas Wayne and an Indian fellow are in an adjacent room “encouraging” the kidnapped girl to open the locked box.) As the men discuss their nefarious plot, Batman shows up in town. Wearing his utility belt like a bandoleer, Bruce makes quick work of a small “greeting” party that clearly doesn’t take kindly to strangers. What follows is a few uninspired pages of decidedly regrettable action scenes where the villains get pounded before taking flight.

A horse-drawn wagon chase ensues, culminating in a terrific river-crash that narrowly misses a man revealed to be the story’s narrator. As villains often do, Savage turns on Thomas Wayne so as to keep the coveted little box for himself. But the immortal caveman is quickly dispatched with a knee to the face compliments of Bruce. It’s here that Jonah Hex arrives in time to shoot his bounty. Bruce falls over in a river and is gone. This is where I became slightly confused. While it’s not made clear, I’m pretty sure that the story’s narrator is Nathan Van Derm, architect of Wayne Manor. Clearly the Waynes and Van Derms have been closely linked throughout history, as it was Martin Van Derm that first sketched Mordecai Wayne back in issue 2 of this series. Here, Nathan speaks of his eventual marriage to the kidnapped girl who’s name is revealed to be Catherine. The narrator also recounts the yet-to-come birth of their “dark son” Kenneth. And tells of Dr Thomas Wayne who was rumored to be 150 years old. I’m assuming that this Dr Thomas Wayne is none other than the evil Dr Hurt who is fond of causing trouble for Batman in current-day Gotham.

It’s hard to lay the art issues solely on Georges Jeanty. Due to time limits, I wasn’t expecting much. What I wasn’t expecting, was Morrison’s failure to capture the intricacies of Old West dialogue. That shouldn’t be too surprising considering Morrison was born and raised in Scotland. It’s hard to pinpoint, but all the characters here sound vastly different from the ongoing JONAH HEX series from DC COMICS written by Jimmy Palmiotti and Justin Gray. I’m also left wondering what the point is of having Jonah Hex in this issue in the first place. This book doesn’t go out on a high note either. The final two teaser-pages which have been effective in previous issues at getting me excited about the subsequent book, fall flat here. But a little research reveals, master illustrator, Ryan Sook will assume the duties of penciler in the penultimate issue. Bruce Wayne will be hitting the streets of Gotham in a hard-boiled detective story. Hopefully we’ll learn more of the importance of Thomas Wayne, Kenneth Van Derm and the contents of the mysterious little Bat-box. But with Morrison reuniting with Sook, consider my expectations raised.

Batman: The Return of Bruce Wayne #4: