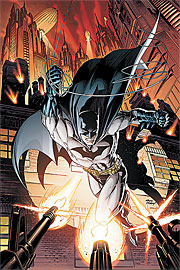 Batman: The Return of Bruce Wayne #6 marks the culmination of Grant Morrison’s tale of the Caped Crusader's battle against Darkseid’s Omega Sanction. But faithful readers of Morrison’s epic journey with this character are treated to much more. Besides the brilliant story and gorgeous art, we learn the first truth of Batman.

The story begins at Vanishing Point. The future’s final moments before all things succumb to the effects of universal heat-death. With the help of Dr. Carter Nichols’s time traveling engine, a disoriented Bruce Wayne appears, still smoldering from his narrow escape in the previous issue. With the help of the Vanishing Point archivists, Bruce identifies the true danger to himself and the entire world as the “…’Hyper-Adapter’…Hunter-Killer…A living curse made to destroy Batman and the world…A ‘Death-Idea’ that never tires. Never stops…” seems as though this infestation of Hyperfauna was able to track Bruce down through time whenever he would remember who he was. Probably why it was so imperative for him to have the Vanishing Point archivists erase his memory until he could return to the present day “age of superheroes” and defeat it once and for all.

But that would never have happened if the search party consisting of Booster Gold, Rip Hunter, Hal Jordan and Superman hadn’t shown up just in time for Bruce to hijack their time sphere and ride it back to his time. Luckily for them, Bruce has trapped them in a future-tech time sphere that, once assembled, will follow him back home to “safety.”

Meanwhile, at the Hall of Justice, Bruce, sporting his Batman-esque biorganic suit compliments of the archivists, starts taking on the Justice League. One by one, his futuristic suit analyzes some of the most formidable heroes of the DC Universe and quickly neutralizes them. Only when confronted by his former partner Tim Drake does Bruce start to remember who he is. Ultimately, Wonder Woman’s golden lasso is required to make all the puzzle pieces fit for Bruce. And now that the power of his future-suit is sufficiently drained, and Superman has returned, Bruce is able to separate the infected technology from his body. The others quickly trap it in an empty time sphere and ship it off to some time in the distant past.

At various points in Morrison’s overarching Batman tale, he has addressed “the hole in things.” At one point Bruce felt that Darkseid was the hole in things. Dr. Hurt believes himself to have that dubious distinction. But here, Bruce is visited by the fourth world God, Metron, who informs him that Batman is the hole in things. This is probably not the first time he has tried to enlighten our hero to this fact. In the previous issue, a wheelchair bound hospital patient utters the same line. We’re also treated to a two-page splash that features Bruce conversing with Gods. Morrison gets metatextual on us here and appears to put Bruce inside of a thought balloon. Batman goes so far as to feel the warmth of living thought. Bravo.

As Wonder Woman prays to her Gods that Bruce will return from the dead, Tim Drake has a more practical idea. “Tell him Gotham’s in trouble.” And Gotham is indeed in serious trouble as readers have discovered in the pages of Batman and Robin #16. In Bruce’s near-death state, Metron asks him the first truth of Batman. After some soul searching, Bruce realizes that, while the brutal murder of his parents left him alone and lonely, Batman was never actually been alone…he had help. The story ends with Bruce preparing to don the familiar cape and cowl and take on the immortal Dr. Hurt.

Readers familiar with the ongoing Batgirl series written by Bryan Q. Miller are already acquainted with the amazing art of Lee Garbett. Here, he has brought the same style that has helped to make Batgirl so enjoyable. Garbett more than holds his own with the industry’s heavyweights that preceded him in this series. And his rendering of a biorganic suited Batman battling Justice Leaguers is a highlight.

Delays on the final two issues of this series could have been disastrous had it not bee for the work of artist, Pere Perez. Just as in the previous issue, Perez comes in for relief of the headlining penciler. And just as in the previous issue, Perez does a stellar job of mimicking the style of his counterpart so as to avoid a jarring transition. Especially remarkable since he shares the art duties with two other artists (Ryan Sook and Garbett) whose art styles are so disparate themselves.

This issue is a fitting end to a historic series and Morrison is truly in his element here, Hyperfauna, biorganic archive machines, death ideas and tangible thought are just examples of how far he’s taken a grounded character like Batman and ascended him to God-like status. Together with Batman and Robin, Morrison has put a remarkable cap on one of the greatest character explorations in the history of comic books. It will be interesting to see what the long-lasting effects of the Omega Sanction will have on Bruce Wayne going forward. In this issue, Rip Hunter acknowledges that while Bruce was bonded to the bioganic archivist suit, he “…would have known…potentially everything for a while” Since it had long been rumored that Morrison wanted to transform Bruce Wayne into a New God, will this knowledge be retained by Bruce? Look for the answers in Batman Incorporated #1 in stores now.

Batman: The Return of Bruce Wayne #6: