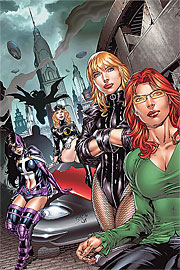 I'd been looking forward to reading this book since it was first announced that the title was being relaunched and I'm pleased to report that my expectations were not only met but exceeded.

As a 'first issue' (of sorts) this book worked really well I thought: plenty for the long-time, committed reader while at the same time accessible and inviting for the new reader – of which there will be many I am sure.

Our story begins out on the frozen snowfields of Iceland as a lone snow-mobile makes its way towards a group of pick-up trucks and hooded, and armed, men. Standing out amongst the group one man is wearing a bright red jacket and he has a small child alongside him.

As the snow-mobile reaches it's destination the driver, a young woman, approaches the group and explains that she's brought the money – her part of the bargain – and she'd like to see the boss. The boss is the man in red, named Chasco, and the young child is a 5-year old girl called Katy, the daughter of diplomats.

Aware of the woman's identity – Dinah Lance otherwise known as Black Canary – Chasco explains that while the money is for the local man he, an American, has his own demands. Dinah's priority, however, is the young girl who she knows has a serious medical condition and needs hospital treatment immediately.

Chasco, still holding a handgun to the girls head, explains that he wants Katy's parents to hold a press conference where they should apologize for what he considers to be their war crimes and then … they should commit suicide live on-air. Then and only then will he release the girl.

Realizing that they've passed the point of no return Dinah makes a familiar gesture with her hands and, in the few seconds before the thugs realize what's happening, is joined by Zinda Blake – Lady Blackhawk – providing air-support.

With the men under fire Dinah focuses her attention on Chasco, and Katy of course, and with a series of swift blows disarms the man and knocks him to the ground. Amid the chaos young Katy has also been knocked from her feet and is lying perilously close to the edge of an ice-shelf that could collapse at any minute …

Despite being grounded Chasco has been able to recover his weapon and has young child in his sights – with his finger on the trigger Dinah has to act quickly as she let's out a trademark sonic scream, races to gather Katy just as the ice shelf cracks, leaps into the air and manages to grab hold of the waiting helicopter. Mission accomplished.

Later on, while waiting at a city hospital Dinah and Zinda receive a very unexpected call … it's none other than 'the world's premiere infojock' Barbara Gordon – Oracle – on the line from the Batcave: it's time to get the team back together. With Dinah and Zinda on board Babs turns her attention to the next member of the team: Helena Bertinelli – Huntress.

Across town, on the nice side of Gotham we are told, Hank Hall and Dawn Granger – Hawk and Dove – have engaged with a street gang known as 'The Sick Cheerleaders'. Armed and extremely dangerous the cheerleaders give as good as they take until Hawk disarms one female member of the gang and hangs her over the edge of a bridge. Fearing that Hawk is at this point out of control Dove urges her partner to release the girl – which he does but not without a chilling declaration – 'God wants a soldier'.

Later that same evening, across town in a Gotham City 'drinkin' bar' an old man is drinking alone at the bar talking to whoever will listen – at this time that whoever is the aforementioned Hank Hall and the the bar keeper, a young woman called Molly. In the corner of the bar, at this point in the company of Zinda, is a pensive Dawn Grainger – Hank is on a destructive, possibly even self-destructive path, and it's understandably worrying her – after all, he is her responsibility.

Elsewhere, Barbara, Dinah and Helena are discussing the events that have brought them back together after all this time – Babs has been sent a series of files containing sensitive, and damaging, information about people close to them including The Riddler, Power Girl … and the Birds themselves. Along with the files came a threat: each hour somebody featured in the files will die and if the Birds don't try to stop it then the information will be published for all to see.

High up on a city center rooftop we find none other than Oswald Cobblepot – The Penguin – under attack and pleading for his life. Standing tall in front of him, we see the outline of a mysterious female figure. With The Penguin now on the offensive (hasn't he always been pretty offensive?!) Black Canary and Huntress step in, tell The Penguin to step aside and leave things to them.

As a fight begins there's speculation as to who the mysterious woman is … Cassandra Cain? Shiva Woosan? Despite holding a numerical advantage Black Canary and Huntress prove no match for their assailant who, with the women grounded, turns her attention to The Penguin.

Desperate for news Barbara pleads with her friends over the comms link for an update – Black Canary and Huntress are down, Cobblepot is dying as the mystery figure is revealed as … The White Canary.

As I say, I had high expectations ahead of reading the book and often when that's the case I can end up feeling just a little disappointed – thankfully, and most definitely, not on this occasion.
I'd anticipated this first issue to be more like a zero issue, largely concerned with establishing – or even reestablishing – the characters so therefore it was a treat to discover so much story within the pages: so much so that I later found myself counting the pages just to see if this was a larger than usual issue (24 in case you were wondering).

The opening scenes of the story, set as they were in the snow-fields of Iceland, made for a great new beginning – atmospheric and chilling (no pun intended!) every panel filled with danger and excitement – and served as a timely reminder of the strengths of the 'Birds'.

From front cover to the last page reveal the art – Ed Benes so well complimented by colorist Nei Ruffino – was absolutely glorious. I'd expected great art but what we got again far exceeded my expectations: the attention detail, imaginative page layouts, the amount of depth to the panels themselves, the rich colors throughout … absolutely superb.

It seems almost superfluous to comment on just how real, how genuine, the dialogue and narration felt. For many, myself included I believe, Gail Simone writes THE definitive Birds of Prey and as such the voice with which she wrote the characters in this issue is very much the voice I hear when I read.

All of this and a puzzling, intriguing new villain who I'm looking forward to finding out more about … what more could one ask for?

Reading this issue felt very much like being reunited with an old friend – there was familiarity, my read felt at first challenging and became more comfortable, there was an opportunity for reminiscence and there was a realisation that life had moved on and that things will never be what they once were, and neither should they be.

Birds of Prey – it's good to have you back.