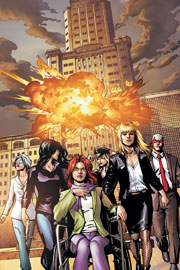 Our story opens three weeks ago as two young women – "Misses Lachess" – stand in an office in an impressive-looking building before a smartly dressed, elderly businessman known as Mr. Tripe. Tripe refuses the women the opportunity to sit as he explains he enjoys disadvantaging others on first meeting. Lighting a cigarette he produces an ink-blot image and asks what they see.

The answers – a bunch of flowers, pretty flowers – disappoint. Rather surprisingly the women are asked to temporarily remove their blouses, an act that reveals several unsightly scars they they refuse to talk about.

What relevance do these scars have when they are interviewing for jobs as receptionists one of the woman demands.

Mr. Tripe, by now losing his patience, explains in no uncertain terms that these aren't receptionist jobs – they are there to interview for the role of personal assistants to the owner of the firm: a Mister J.

Showing the ink-blot once again this time the women give Tripe the answer that he wanted to hear – it's a woman's crushed skull; a woman's entrails. Clearly impressed Tripe immediately hires the pair and explains that they must start this evening … but they won't be working in this office.

Elsewhere, Renee Montoya – aka The Question – crouches over a manhole cover with crowbar in hand. As she's about to lift the cover she's joined by Huntress aka Helena Bertinelli and after a brief exchange – "Q", "H" – they get down to business … is The Question really going into the underground tunnels with a storm on the way? Doesn't Huntress have something else she could be doing? Someone else she could be troubling?

With neither woman being known for their patience these questions go unanswered as Montoya drops down the access chute and in one swift movement takes out an armed lookout. As Huntress joins her Montoya explains that there's a "buy going down tonight" – weapons for drugs.

Drawing her flashlight Montoya brushes aside Bertinelli's remark that she has something to ask her, something that will make a difference, as she sets off into the tunnel complex. Failing to take the hint that her presence isn't required Huntress continues after her, demanding to know why her help on this case isn't welcome – the answer, we learn, is that everyone involved in the "buy" is a police officer: and The Question wants to go it alone.

Returning above ground and to the entrance to the earlier city office building Mr. Tripe, joined by his two new female employees, welcomes a Miss Hargison and her entourage. Miss Hargison, we learn, is none other than Lady Blackhawk, also known as Zinda Blake, and her entourage consists of Black Canary aka Dinah Lance, Dove aka Dawn Grainger, and Hawk aka Hank Hall.

Shamelessly flirting with Tripe while passing through the buildings security "Miss Hargison" asks Tripe if they can be alone, after all she feels safe in his presence. Despite their protestations Tripe dismisses his own security personnel – the aforementioned Miss Lachess, Triss and Somnia – and as he and Zinda enter the lift alone Dinah activates her comm link to Oracle – Barbara Gordon – who confirms that they now have two minutes during which the security cameras will be off line.

"And Zinda's laying it on a bit thick, isn't she?"

Now that they are alone Zinda pauses the lift, turns to grab Tripe by his suit lapels and kisses him firmly on the lips before explaining that she's being blackmailed about events earlier in her life … and she needs his help. At exactly the same time Dawn and Dinah pry open the lift-shaft doors and swing out into the void, heading down the shaft using a series of access ladders while carefully avoiding the motion detectors.

Back in the tunnel complex below Gotham City Huntress and The Question continue their conversation – The Question isn't concerned for her or Huntresses safety – she's concerned for the safety of the officers. Issuing one final warning that their prey must not be harmed – "punctured" as she puts it. Leaping into the crowded chamber where the deal is being done Huntress catches the men unaware, swiftly taking several of them down. As others try to make their escape The Question joins her friend and likewise disarms a number of the startled policemen.

As a flurry of bullets rip into a soft canvas bag bank notes fill the air before settling on the surface of the water and being swept away. At the same time The Question disarms an officer and knocks him out using the butt of his gun … meaning she's left holding the weapon. Fearing that one of their visitors is now armed one of the men focuses his attention on this new threat as "Bam" she's knocked off her feet and into the water pool.

This proves to be one act too far for Huntress as with a swift kick and a strong headlock she disarms two more threats before forcing the shooter into the water and threatening to drown him in revenge for his attack. As her patience is running out she feels a firm hand on her shoulder, looks up before hugging The Question with a mixture of joy and relief.

Recovering from his own water ordeal the shooter pleads with the two women that they kill him. That they kill them all. Continuing, he explains that his wife's sister had been kidnapped before being tortured for three full hours – and he and his wife had been forced to watch the gruesome events on video afterwards.

Back in the upmarket office building and Mr. Tripe thanks his guest – Zinda – for such a "charming moment", and expressing his willingness to take things further. As Tripe goes on to explain that he is in fact dying that same moment Triss and Somnia Lachess, realizing that everything is not as it at first seemed, draw their weapons on Hawk demanding to know what he and his friends are up to.

Elsewhere in the same building Dinah and Dove have finally found their way to the basement floors and as the lights go off they are taken aback by what they've seen – graffiti covers the walls and dolls hang from the ceiling. In another area of the basement the two women come across another curious sight – a wooden chest, a telephone and a notepad.

Back with Zinda and Tripe is explaining that he's not afraid of death because he's found his "savior" – and she has remarkable abilities. "Alexa Deborah Merkel … daughter of the mass murderer, The Ragdoll".

Returning to Huntress and The Question in the tunnels deep beneath street level and Huntress has heard enough. Over the comm unit she urges Barbara to get Black Canary and the team out and away from Tripe and his people.

'Hostile Takeover, A Thin Edge Directly to the Brain' continues.

Regular readers will know that, as much as I've been enjoying Birds of Prey over the past dozen issues, it's fallen short in a number of areas for me. I think this latest issue from Gail Simone and Jesus Saiz may just have been, for me, the best for a good while.

Jesus Saiz's dynamic, confident cover immediately set the tone – as many of the earlier issues had it "… when the heroes are in trouble they call the Birds of Prey" – with the team casually strolling away from a burning, crumbling building: an image straight out of the original A-Team (and I mean that in a good way!). Gail Simone's story had a 'Mission Impossible' feel about it, her dialogue in places sparse, in places rich and elaborate.

It cannot be a coincidence that as the book has focused more on Helena Bertinelli/Huntress my enjoyment has risen. In this story, Huntress appears at first to be featuring in something of a 'backup' feature as she ties in with Renee Montoya/The Question to break up a ring of crooked police officers – by the end of the issue it was obvious that this thread is to be integral to the larger story. I find it hard to believe that Huntress doesn't have a significant role to play in the new DC Universe.

I particularly enjoyed the introduction of several new characters – Mr. Tripe and the sisters Trissa and Somnia Lachess. Tripe – very appropriately named I thought – came across as a vile yet equally charming man: indifferent, hard, uncaring with his own people yet personable, welcoming, humble even towards others.

The sisters clearly have a wider history than we're currently privy to – I found myself wondering what's brought them to Tripe's office, obviously how they received their horrendous scars and precisely what did they need to do to 'serve their time'. I'm looking forward to finding out more.

The sense of 'Mission Impossible' was captured through the scenes involving Zinda, Dinah, Dawn and Barbara and their elaborate plans to penetrate the 'inner sanctum' of Tripe's headquarters. With Barbara back at base calling the shots these pages held a genuine sense of excitement and tension for me – if, as we are told, the relaunched Birds of Prey is to draw more heavily on the 'dark ops' aspects then I may, after all, be picking it up.

If I've got one gripe about the story, it's the name of our 'master villain'. While I appreciate it must be incredibly difficult to keep creating new, larger-than-life, characters the name "Junior" failed to deliver the sense of fear that the closing scene truly deserved. In fact, I'd go as far as to say it undermined that scene.

Both the cover and interior art from Jesus Saiz were very much to my liking. For me one of Saiz's strengths is his ability to portray emotion through facial expressions. The sisters Lachess appeared at times weak and brittle, at times strong and confident; Zinda was captured as playing both a confident and yet vulnerable woman; I was reminded that Helena is both determined and playful. All of these personalities captured through facial expressions.

Once again credit must go to colorist Nei Ruffino for the wonderfully deep tones throughout the book – the scenes set in the underground tunnels felt cold and dank to me; those set in and around Tripe's offices had a warmth and comfort to them that was in complete contrast to that on the basement floors. Along with Guy Major on Batgirl these guys have really helped me appreciate the work of the colorist.

Over recent issues this title has been, for me, at best a decent read. This latest issue, however, was hugely enjoyable and suggests that this short story-arc could be one of the most enjoyable yet. Having struggled somewhat, in my opinion, to find its feet over the past year or so, it would be ironic, and a great shame, if it finally stands tall just as the series is coming to a close.