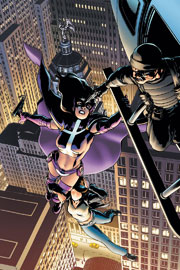 Picking up immediately as the previous issue closed this second, and closing, installment of Hostile Takeover – No Sentence Shall be Commuted – opens with Huntress urging Oracle – Helena Bertinelli and Barbara Gordon – to abort the Birds of Prey's latest mission: unfortunately due to a breakdown in communication with Black Canary and Dove, Babs explains that isn't going to be possible.

From the tunnels deep below Gotham City Huntress, accompanied by The Question Renee Montoya, explains that whoever 'Junior' is they need to proceed with the utmost caution: after all she – Junior – "made Catman afraid. Catman".

With a heavy heart Babs explains that yes, she's heard a little about Junior – she once ran the west coast organized crime syndicate but stayed 'off the radar' by relying on basics like a telephone and a note book … there's little or no trace of her.

Reaching street level Huntress announces that if they can't warn the Birds to make their exit then the only thing they can do is fetch them and get them to safety. With that she and The Question jump on Huntress's motorcycle and head across the city.

Back at Kord Tower and Barbara is looking for an answer – how can she find out more about Alex Merkel, also known as Junior. Almost out of nowhere her moment of reflection is broken by Creote who quickly offers his and Savant's assistance … an offer that is initially rejected before Babs realizes that an answer may be closer to home that she initially thought.

Savant and Creote have their own criminal connections of course.

Elsewhere and Black Canary and Dove, Dinah Lance and Dawn Grainger, are literally in the dark trying to contend with blade-wielding Junior. Despite their undoubted combat skills – including Dinah's Canary Cry and Dawn's ability to fly – they are certainly coming off second best as feet, fists and blades fly.

With both women grounded Junior moves in for her final act – the "Mercy killing" as she calls it – and using the darkness to her advantage she surprises Dove and stabs her in the back. As her partner falls to the ground Dinah believes that the battle has been lost.

Many floors above and Zinda Blake, Lady Blackhawk, is receiving a beating of her own from the odorous Mr. Tripe, in terms of day to day activities the head man. Demanding to know who sent her and what she and her team want Tripe reminds Zinda that there's nothing – nothing – that he can be threatened with and he won't allow anyone to touch his employer.

Down on the ground floor Hank Hall finds himself held at gunpoint by Tripe's assistants – sisters Trissa and Somnia Lachess. Realizing that the phone call Trissa has received is unlikely to be good news he transforms into Hawk as the two women open fire. Through what appear at first to be inconsequential verbal jibes the sisters reveal that their clothing, as well as being very stylish, has a practical function: it isolates them from the electric charge that they subject Hawk to.

Recovering from his 'shock' Hawk surprises the women by getting back to his feet and telling them that now he's really, really, not happy.

Returning to the basements and Dinah senses that following the attack Dawn is fast fading. Gathering her in her arms Dinah is in no doubt that if her friend is to survive she need medical attention – but with Junior lurking in the shadows how can that be possible.

Moments later Dinah's words of encouragement and comfort for Dawn are broken as their attacker runs at them – and not a moment too soon the room is filled with her Canary Cry … an act that buys them a little breathing space at least.

Back at Kord Tower Barbara is on the telephone – and it's clear she's not having an easy or enjoyable conversation. On the other end of the line is Catman – Thomas Blake – and Babs appears to have touched a nerve with him: she realizes that two of the most important things in his life are money – which he declines – and Huntress.

With Huntress in trouble Catman reveals that he's prepared to listen.

Across the city and Huntress and The Question are on their target buildings roof-top discussing their next actions. Understanding that contrary to security at ground level their best entry point might be from the roof the women are sent flying to the ground as a helicopter rises from the side of the building, opening fire on them. Seizing the moment Huntress runs, leaps and grabs onto the aircraft before climbing up and taking out the gunman and taking the pilot captive.

Down below her friends and teammates appear to be making some progress – Zinda knocks Tripe to the ground with a well placed head butt as Dinah, carrying Dawn makes way up the stairs towards safety. Realizing, however, that with Dawn's condition worsening time was very much against them Dinah decides it's time for one, possibly final, stand. With Junior hidden by the darkness Dinah calls her forward … "Come on and try your luck, why don't you?".

As Junior steps forward the basement is flooded with light – intelligence courtesy of Catman and Barbara – which momentarily gives Dinah an advantage – an advantage that's doubled as she's joined by Huntress. With The Question now holding the helicopter pilot prisoner Huntress sets about Junior and with one swift kick knocks her off the staircase and down and down back into the bowels of the basement.

Gathering Dawn into her arms and heading for the roof Huntress explains that it was thanks to the Canary Cry she was able locate her – and the fact that she's the Huntress of course.

Half an hour or so later Dinah, Zinda and Helena are debriefing with Barbara back at Kord Tower. Realising that things didn't exactly go to plan, and recognizing Helena's actions in rescuing the team, Babs 'promotes' her to new field leader – an appointment that understandably smarts with Dinah, initially at least. Zinda sounds a further word of caution by reminding the team that with no body there's no proof that Junior is actually dead.

With such a dangerous opponent who will now have both allies as well as weapons, Barbara explains, there's only one reason why they would go back.

"She hurt my girls".

End. Thirteen issues of Gail Simone's Birds of Prey series and that's it now before the much publicized DC reboot. Rather like the series as a whole this current two-part story-arc was at times enjoyable – particularly through issue #12 – at other times frustrating and just a little unsatisfactory – most of this issue I felt – and overall best summed-up as okay with a sense that okay just hasn't been good enough.

Whether it's me projecting what we know about this titles future but this issue felt like it was rushed, a compromise. Issue #12 did a great job, in my opinion, of setting up what was promising to be an engaging, thrilling story. This issue – again for me, others will no doubt feel differently – left me with a sense of 'what could have been', a feeling of frustration.

One of my first frustrations was to see another new artist on the book – ironically I rather liked Diego Olmos's work (one or two somewhat inconsistent panels aside) but this simply added to my regret that the publisher hadn't settled on a good artist to work on the title and stick with them.

I appreciated Olmos's subtly when capturing the emotions our central characters were experiencing – the almost blind panic of Huntress, Barbara feeling helpless as she believes she's run out of ideas, Zinda's 'never say die' attitude, Dinah's sense that for once she has found herself out of her depth. Emotions captured not just through facial expressions but through implied movement and fluidity of body language.

As always, much credit for the look and feel – and therefore my enjoyment – of this issue goes to colorist Nei Ruffino for his magnificent work.

The story just felt rushed – maybe it was and had to be – and this was probably my greatest frustration. There were too many 'conveniences', too many aspects that went unexplored: I'd have liked to seen the Birds extraction from the building … what happened to Tripe? … and the sisters Lachess? … why hadn't Dinah used her Cry sooner? … did Barbara really need Catman to prompt her to turn on the lights? (!) … wouldn't Huntress, or someone, look to check whether Junior was actually dead?

Some or all of these aspects may well have been areas that writer Gail Simone would have liked to explore given more time and pages but, as we know, that isn't the case in the current DCU unfortunately.

I did approve of the decision to appoint Huntress as the teams new "field leader" – in Barbara's own words she's certainly "earned it" I'd agree. Recent issues of Birds of Prey have served as a showcase for Huntress and, as I've said before, I've been reminded what a fantastically complicated character she is.

Banner advertisement aside, I enjoyed this issues cover – covers have undoubtedly been a strength of this series and this image very much continued the feel of 'Mission: Impossible' that I took from the previous issue.

Finishing as I started, and in summary, this was a decent read – certainly not bad but by the same token not quite as good as I'd hoped and expected.
Would I recommend picking up the series at the moment? With everything that's happening at the publisher over the coming months then I'd have to say no. Will these single issues make for an enjoyable read when collected? Yes, I believe they will.