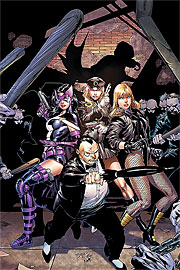 Following my enjoyment of the first issue of the relaunched Birds of Prey series – not to mention the critical acclaim that the issue received – I had extremely high expectations when I picked up and started reading issue #2: not only were my expectations met they were most definitely exceeded.

Picking up where issue #1 left off, 'Endrun', part two of this four part story-arc, opens up in the Gotham City retail district, where Dinah and Helena – Black Canary and Huntress – have, for the first time, encountered their new adversary: White Canary.

With The Penguin lying injured and covered in his own blood the two women take stock of their situation and deduce that the only way to stop this mysterious woman might be to 'take her down' with them – music to Huntress's ears as you can imagine.

With help on its way, courtesy of Barbara Gordon – Oracle – over the comm link Black Canary and Huntress realize that the time for talking is over and engage their target. As they deliver blow upon blow the women don't appear to be making any sort of impression – indeed White Canary takes it all in her stride and counters their moves effortlessly until …

Momentarily distracted, Huntress seizes the moment, leaps at White Canary and, temporarily at least, disables her as Black Canary, losing control of her emotions, reigns down punch after punch until Zinda – Lady Blackhawk – arrives on the scene along with Hawk and Dove – Hank Hall and Dawn Grainger. At this point it's then the Birds time to be distracted as White Canary wrestles free from Huntress's grasp and, in turn, neatly evades Hawk's attack.

Back at the base, Barbara, still monitoring events via the comm link, picks up a story on a television news channel that Gregory Chasco – the villain featured at the beginning of Birds of Prey #1 – had died as the reporter goes on to say that Chasco's fatal wounds were as a result of Black Canary's actions. Furthermore, the reporter goes on to say, the channel had exclusive live footage of the 'vigilante' – Black Canary – at large on the Gotham City streets.

Aware that the police were on their way and realizing that the situation was getting way out of hand Barbara orders Black Canary and the team to stop fighting and leave the area as quickly as they can. With the authorities closing in on the scene White Canary herself realizes it's time to move on – but not before delivering a chilling warning – 'one of you will die every hour for the next six hours …'.

Outnumbered and surrounded by armed police officers there's a decision to be made – fight or flight? Unsurprisingly for a group that includes Hawk and Huntress, Black Canary chooses to fight and, as the officers open fire, the Birds respond with their own brand of non-lethal force. As the fighting intensifies a police helicopter opens fire sending Dinah and Zinda scurrying to avoid the flurry of bullets.

Apparently less concerned for his own safety Hawk watches on momentarily before taking action – sending the helicopter and its crew crashing to the ground.

Watching the events play-out on the television news channel Barbara is becoming increasingly alarmed at what's unfolding as details are revealed of Black Canary's ties to former Star City Mayor Oliver Queen who himself, the viewers are reminded, has a dark past. While still trying to make sense of events, Oracle receives a communication from a familiar source – Aleksandr Creote. A distressed Creote reveals that he and Savant – Brian Durlan – had come under attack from a woman saying that their association with the Birds meant they themselves were guilty.

Revealing to Oracle that Savant had died in the attack, and that he considers her responsible, Creote – in a genuinely shocking scene – takes his own life.

Returning to the alleyways of Gotham City, the Birds are making their way to the safety of Penguins Iceberg Lounge nightclub when they come across a television set broadcasting the evenings news feed. To Black Canary's horror the broadcast reveals not only her civilian identity and more details of her personal life but also claims that she abandoned a young Asian girl whom she'd planned to adopt when the child proved 'inconvenient'.

The issue closes with Barbara trying to come to terms with events and realizing that the strengths of the Birds – 'Canary's fists, my brain' – are being used as weapons against them: and it's now time to fight back.

As I said at the start of my review, this was a really enjoyable read that gave me everything I ask for from a comic book: the story was well paced, the art is simply fantastic, there was action aplenty, a little comedy – I like 'comedy', I don't enjoy 'silliness!' – there were acknowledgments to previous Birds legacy as well as a cast of characters with tremendous strengths that are occasionally also their weaknesses.

Regular readers will know that I'm not generally a fan of the long fight sequences often found in comics and I'll be the first to acknowledge that about a third of this issue is exactly that. However, on this occasion it seems to work for me and I think this is down to a number of factors.

Firstly, the pacing of Gail Simone's script which sees never more than a couple of pages of 'punches and kicks' before the pace changes and we, the reader, are able to catch our breath as the characters lick their wounds, consider their options and plan their next move.

Secondly, Ed Benes's page layouts are every bit as enjoyable and engaging as his illustrations. I'm sure we knew that Ed Benes is a talented artist – although I can't help but feel he's getting stronger all the while – and what's particularly caught my eye have been the panel layouts which, for me at least, give the pages a real sense of chaos, energy and excitement – if you've got a copy in front of you check out pages four to eight for an example of what I'm referring to.

As the story progresses I found myself enjoying – perhaps appreciating would be a better word – how Dinah's state changes: from plain aggression in the opening pages through resignation when confronted by armed police officers to the anguish she feels and exhibits when her identity and personal relationships are exposed on television: all perfectly captured by her varying facial expressions.

Likewise, with Barbara during and following the video call from Creote we saw, I think, the reactions of a young woman normally so used to being in control of events suddenly gripped with a realization that these particular events were beyond even her control – for now at least.

Moreover, every character in this book was a joy to behold – Huntress's thirst for action, Zinda's charming 1940s dialogue, Dove's compassion, Hawk being … well Hawk being Hawk! Returning to the comedy I mentioned previously, I enjoyed that Penguin was so immediately smitten with Dove … his reactions and comments when Dove showed him just how compassionate she is really did make me smile.

I've so far done a pretty good job of avoiding the 'who is White Canary?' speculation and I'm not going to add to it here. I've got a few ideas – one or two I'd like to believe could be true and one or two I'm hoping not.

What I do know is that Birds of Prey has returned in strength and quickly established itself amongst my favorite monthly books.

An excellent read – I cannot wait for the next installment.