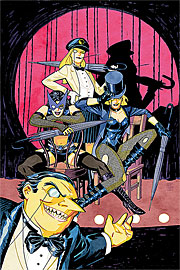 The first story-arc of the returning Birds of Prey series continues with part 3 of the 4 part 'Endrun: Whistling Past the Gravestones'.

Opening at The Iceberg Lounge the Birds, minus Hawk!, are being very … 'attentive' towards Penguins – it seems that Black Canary, Huntress, Lady Blackhawk and Dove are prepared to go to fantastic lengths to please Oswald Cobblepot.

As quickly as we've began to comprehend the behavior of the women we discover that 'fantastic' is indeed the right word – we are witnessing one of Cobblepot's dreams, brought on perhaps as a result of blood lost during his earlier assault. In reality, as the women look on with a sense of disgust and, in Dove's case concern, Hawk keeps watch over the street from a nearby window.

Realizing that it's only a matter of time before their whereabouts is discovered, Black Canary – Dinah Lance – contacts Oracle to discuss the groups next move. Oracle – Barbara Gordon, who is at this time back at base and ready to help the group move to a safe location – advises that she's spotted their pursuer – the mysterious White Canary – elsewhere in the city and sounds a word of caution.

Lamenting the situation they find themselves in Black Canary asks whether Oracle has any news on how Gregory Chasco – the kidnapper that she apprehended in Iceland – could possible have ended up dead several days later. As Oracle reveals what she has been able to learn from the authorities Dinah very quickly begins to feel like she's been set up …

As Dinah ponders her situation Barbara goes on to explain that both Savant and Creote are now dead – information that Dinah finds very hard to process and understand.

Elsewhere in the club, Hawk and Lady Blackhawk are discussing how on earth White Canary was able to piece Hawk's skin with a blade – just as an armored tank crashes through the wall and sends them diving for cover.

As the Birds scatter to evade the hail of bullets delivered by the ensuing rogue police officers Barbara discovers that her computer network connection has crashed leaving her powerless to help her friends. At first puzzled by how security could have been breached she reaches a frightening conclusion – she's not alone in the Batcave. Hearing a voice behind her Babs turns and discovers she has unwelcome, and unexpected, company … Savant and Creote!

Back in the Iceberg Lounge Dove realizes that as a 1920's or 1930's 'speakeasy' there ought to be a secret way out of the club. As Penguin's health takes a turn for the worse he mumbles a line about being a mermaid in the desert – a comment Hawk takes to mean that Penguin doesn't belong where he is, something he feels he can relate to.

As the onslaught continues Dinah realizes that she has lost her comm link with Oracle and as she considers that things can't surely get any worse – a second tank arrives! Undeterred, Hawk jumps up and disables the vehicle … as an all too familiar weapon – White Canary's hair blade – flies through the air and for the second time downs Hawk.

Reverting to his 'civilian' identity Hawk – Hank Hall – falls to the ground and lies motionless before his associates. Removing the hair blade Black Canary notices that there's a word written on an attached ribbon – 'Choose'. Immediately Black Canary relates this to the threat from White Canary that one of the team – or someone they know and love – will die every hour.

Returning to the Batcave we discover Barbara threatened and at gunpoint by Savant and Creote. Lifting Barbara from her chair and carrying her to their vehicle Savant explains how they faked their deaths and in turn breached security protocols. As Babs questions the duos motives and objectives she's understandably alarmed to discover that it's only a matter of time before her true identity is revealed to the world and only then would they put an end to their 'mutual pain'.

In the meantime, across the city Black Canary, Lady Blackhawk and Huntress are weighing up their options – and perhaps realizing that those options are limited. Focusing on getting Penguin and Hawk to the hospital Dinah decides that she – and in turn the other team members if necessary – have to go after White Canary and stop her.

Ignoring Huntress's uncharacteristic advice that she take an initially low key approach Black Canary tracks down and confronts White Canary on a roof top overlooking their temporary hide-out. As the women exchange blows Black Canary continues to try to figure out her opponents identity – piecing together both verbal and physical clues she comes to a realization that she does indeed know the identity of her new foe.

I thought this was a very enjoyable read although, for me, not the strongest issue since the series relaunch. On the whole I'm enjoying the pace that the story is being told at – three issues in and I feel like we've seen a lot of story told across those pages. I'm particularly enjoying reading the interaction between the various team members and I'm appreciating the Black Canary/Huntress relationship at the moment. The 'who is White Canary?' teaser has got me hooked and, while I'm carefully trying to avoid reading spoilers, I'm certainly eager to discover her identity (if I haven't already!).

I didn't particularly enjoy the opening pages of this book: I'm referring to the scenes from Penguin's dreams. As beautifully illustrated as they were the theme – the Birds acting-out Penguin's fantasies – felt rather … gratuitous, unnecessary.

I was surprised by the return of Creote and Savant and, to be honest, a bit disappointed to see them back – nothing against the characters themselves but, while I'm not in principle opposed to characters dieing and then returning at a later date, it's only felt like 5 minutes ago we first learnt of their deaths. As with the scenes in the opening pages I'm willing to accept that there's a twist to come here that I'm not currently seeing perhaps.

As I've already said, the artwork throughout this book is superb: fantastic detail in the pencils – in their portrayal of the central figures, particularly Barbara Gordon, Benes and Melo have captured a familiar and yet fresh look I feel – glorious bold inks and, not to be underestimated, superb coloring throughout: very much the style of artwork that I enjoy.

For once I wasn't overly keen on this issues cover – I felt Cliff Chiang's illustration was just a little too 'cartoony' for my liking and somewhat at odds with the style of the rest of the book.

In many ways, this issue felt like what it is … a 'middle issue' of sorts. Was I a little disappointed? Yes, I was. The quality of the first 2 issues was such that this didn't quite reach those heights for me.

That said, I certainly enjoyed the book and I'm very much looking forward to picking up issue #4 next month for the conclusion of 'Birds of Prey: Endrun'.