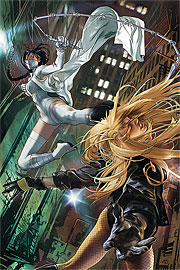 After a little disappointment with issue #3 the latest issue of Birds of Prey – issue #4, the forth and final part of the Endrun story-arc – felt much more satisfying.

'Impact Fracture' opens with a prologue set 19 years ago along the Silk Road of Asia. As thunder cracks and lightning illuminates the night sky an old man stands alone in the rain.

From a house behind him cries of help can be heard as the old man looks to dismiss a woman who is seeking his attention – it appears the cries come from a woman who has recently given birth: to a girl. On hearing the sex of the infant the old man instructs the woman to dispose of the child as, he explains, he is allowed only sons.

As the woman carries the child from the house she is struck by a tremendous bolt of lightning, killing her – but remarkably not the baby – instantly. Perhaps sensing that the baby is destined to live the old man instructs a younger boy – known as Rabbit – to take responsibility for the girl, adding ominously that 'her training begins tomorrow'.

Returning to current day and we find Black Canary face to face with White Canary on a city center roof-top – where we left issue #3. Black Canary – Dinah Lance – reveals that she has figured out the true identity of her adversary as the two are about to engage in combat. As each woman lands blow upon blow on each other Dinah taunts her opponent that she once took on and conquered her 12 brothers – a remark that initially appears to merely inspire White Canary to hit back harder and with greater frequency.

Elsewhere, we find Oracle – Barbara Gordon – at the mercy of Brian Durlin – Savant. Trapped in her wheelchair on the edge of a viaduct Barbara pleads with Savant not to take another step as she finds herself precariously close to the edge. Savant is out of his mind explaining that he'd been tortured by Calculator's men because he simply was working for Barbara. Aleksandr Creote, explains that his partner Savant has lost the ability to judge time – he can't tell the difference between yesterday and ten years ago. Every day for the past two years he has relived the experience of being tortured – and make no mistake he blames Oracle.

Returning to the city and White Canary stands victorious over a grounded Dinah – declaring that her family were shamed by Black Canary and after she's watched Penguin – Oswald Cobblepot – kill Huntress, Lady Blackhawk, Hawk and Dove she would one day return to kill others close to Dinah. With her back turned and climbing a ladder off the roof top Black Canary seizes her moment and lets fly with her trademark sonic scream sending White Canary, and half the building structure, flying.

Across the city Penguin, who we thought was leading the remaining Birds to safety, turns his attention to Lady Blackhawk – Zinda Blake – and stabs her with a blade concealed within his umbrella. Immediately on the offensive Huntress – Helena Bertinelli – pulls out her crossbow and threatens her friends' assailant. Resisting the threat Penguin declares that the injured woman 'might' make it hospital if everyone follows his instructions and waits for his partners – White Canary and Savant – to join them. Penguin goes on to explain that his goal – power of course – will be his once he has Savant's detailed personnel files.

As Black and White Canary again come face to face we are reminded that Black Canary's previous encounter with White Canary's brothers – known as the Twelve Brothers in Silk – ended in defeat for the brothers and, in the eyes of White Canary shame: such shame in fact that White Canary hunted each of her brothers down one by one and killed each of them.

Back on the edge of the viaduct Barbara and Savant continue their conversation – a conversation about trust and about faith. Overcome by the memories of his experiences Savant himself moves closer to the edge and before bidding Barbara farewell, he steps off the bridge. Barbara pushes herself from her chair and manages to grab hold of the mans hand. As Savant pleads to be released Babs realizes that she can't hold him and pleads with Creote for help.

With White Canary apparently getting the better of their fight she taunts Black Canary that she'll shortly take the lives of people close to Dinah – hearing a role-call of loved-ones names Black Canary snaps as she hears Sin, described as the child she abandoned, on the long list as the two women crash through a large window and fall to ground.

As Lady Blackhawk lies injured under the maniacal gaze of Penguin, Hawk – Hank Hall – senses that he's dying of the wounds he sustained earlier from White Canary's blade and pleads with Dove – Dawn Granger – to cremate him, not to let them bring him back from the dead again.

As Black and White Canary reach street level their fall is broken by a camper van and the two lie stationary but alive.

Overwhelmed by circumstance the usually peaceful Dove turns her attention to Penguin and punches him to the ground and unconscious. Seizing their opportunity she and Huntress gather up their friends and head for the hospital.

After some time refusing to help Barbara save his partner's life Creote relents and reaches down to grasp Savant's hand – pulling him back to safety.

With her plan in pieces White Canary regains consciousness only to find herself captured and bound by a relieved Black Canary. With the threat of the young woman now apparently neutralized Black Canary asks her prisoner whether she did indeed kill the kidnapper Gregory Chasco.

To Dinah's great surprise White Canary reveals that the killer was none other than Shiva … and offers to team up to defeat her.

As I say, this felt much more like the quality of the first couple of issues of Birds of Prey and an altogether much more enjoyable read than the previous issue.

One of the things I'm enjoying about this relaunched series is the feeling of real depth to the individual characters and their back story. I've read and enjoyed a number of the older Birds of Prey stories and yet at no time do I feel like I'm 'missing something' when the story touches on events that I'm not familiar with – the book appears to be ideally suited to both new and old readers alike.

The reveal of the true identity of White Canary was, I must say, something of a surprise to me and I like that we're being introduced to a new character, albeit one with a connected history. I'd have liked it even more if she were given a 'real' name, other than 'Sister in Silk'.

I can't say I'm particularly familiar with the 'Twelve Brothers' story references in this issue although I'm looking forward to finding out more – by the same token I'm confident that everything I need to know has and will be referenced through the pages of this title.

The prologue was an unexpected and enjoyable feature of the story-telling in this issue and, towards the climax of the book, I enjoyed how the story cut rapidly from location to location leaving me with a sense of confusion at times – and I mean that in an entirely positive way!

I was a little surprised by Huntress's reaction to Zinda's stabbing. Would she really be able to hold herself back? And if she could would she then wait around on Penguin's terms or would she, as I suspect, take matters into her own hands, 'take care' of Penguin and get her friend to hospital.

The art on this book has, by and large, been superb and this issue continues that trend with a magnificent cover by Alina Urusov (which I'd love to see as a poster) and some great interior art from Ed Benes, Adriano Melo, J.P. Mayer and, again, colourist Nei Ruffino. As nice as it was the interior art did lack a little consistency at times I felt, notably the scenes on the viaduct with Barbara, Savant and Creote, that jolted me out of the moment and interrupted what was, until that point, an engrossing read.

In summary, four issues in and Birds of Prey is already proving to be one of my must read and most looked-forward to titles each month. We've had some great covers, superb 'cinematic' story-telling and wonderful interior art.

There's been plenty in this series so far for the long-time reader and equally plenty for the new or just occasional reader: and I don't want to underestimate just how difficult a line that must be to tread.

If you're already picking up Birds of Prey then you'll know where I'm coming from – if you're not then take my recommendation and pick it up, I don't believe you'll regret it.