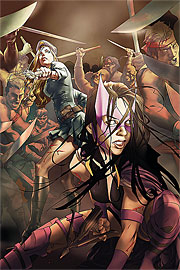 Issue #5 of Birds of Prey, entitled Aftershock, the first of a two part story-arc, continues straight after the end of the previous issue, with Barbara Gordon, Savant and Creote atop the rain soaked viaduct. With Savant openly apologizing for his actions Barbara reassures him that she – and they – will be okay as she at the same time asks an equally repentant Creote for some help getting up from the ground and into her wheelchair.

With Savant still on his knees Barbara promises her ongoing support – and as Creote takes his partners hand and helps him to his feet the two men embrace as Babs sits back in her chair and, after a short time, asks the men if they could get in out of the rain: her words fall on death ears.

Checking in with her team, Barbara asks for an update of their situation. Black Canary – Dinah Lance – reports that while she may have White Canary captive and handcuffed she's still cautious. Despite her broken bones Dinah explains that she needs Lady Blackhawk – Zinda Blake – to fly her to Bangkok: she can't explain why at the moment, she just needs to go.

Still over the comm link Huntress – Helena Bertinelli – explains that with two injured team members, including Zinda – she's not going anywhere. Beyond that, she explains, there's still the question of what to do with The Penguin …

Stunned by Barbara's instruction to 'let him go' Huntress decides to take matters into her own hands and deal out her own punishment. With Babs imploring her to remember that the team are still wanted Huntress seizes Penguin, sets up her cross-bow and prepares to fire – before thankfully being convinced otherwise by Babs' promise that they would one day bring him down, but through legal means.

Back across the city Black Canary breaks the news to her friends that she's quitting the team – and she's not expecting to return. As Huntress pleads with her to let her go with her Black Canary says her goodbyes … and just as quickly she's gone.

Traveling at speed with Savant and Creote, a clearly upset Barbara ponders their next move wondering what Batman would do in this circumstance – before instructing Creote to drive to the Kord Tower.

Having said her goodbyes Black Canary realizes that her foe White Canary always anticipated that her alliance with Penguin, Savant and Creote may have been broken, as White Canary reveals that she has the means to take them out of the country adding that Sin, Dinah's daughter, would be safe.

Not needing to think twice Dinah orders White Canary into the waiting car and says one more goodbye – to Gotham City itself.

Huntress, meanwhile, is lashing out – literally and figuratively – at everyone around her: Black Canary, Oracle and a gang of young punks who are harassing a young woman in an alley way. As a small child – and a distant shadowed figure – watch on Helena lays into the punks and vows to herself that she's going with Dinah, no matter where she's heading.

Arriving at Kord Tower Barbara explains to Savant and Creote that they are now looking at her new secret base of operations – the third floor and sub-basement of the tower – and with a new base she's going to need a new staff: her two companions … but there's a catch.

Having arrived at a local airfield Black and White Canary board a private jet, that's operated under the command of White Canary, Dinah is offered medical attention before being advised to bid one final farewell to her home.

Safely at a local hospital Hank Hall – Hawk – awakes from a dream with a jolt, startling Dawn Granger – Dove – in the process. Searching for his wound Dawn explains to Hank that the point of entry started to heal even before he reached the hospital. Dawn goes on to explain that while most of the numerous flower arrangements around the room were gifts for her from a smitten Penguin there was one anonymous arrangement left for Hank that had a note attached – 'You have a purpose'.

Alongside another hospital bed Huntress sits reading a book, waiting on a recovering Zinda. Having been brought up to speed on developments by her friend Zinda sits up and declares that they'll follow Black Canary whether she wants them to or not.

Ten hours later as we're told, the two women touch down in Bangkok, make their way through the terminal building and jump into a taxi … and before they can pull away they find themselves joined by several others. Ordering the taxi to drive on one of them, a woman brandishing a knife advises the two travelers that as uninvited guests they will be taught a lesson.

The two friends exchange a knowing look before lashing out with an elbow, a head-butt – tumbling from the vehicle they discover there are even more potential opponents waiting to tackle them. Despite being heavily outnumbered the women are holding their own before their opponents are commanded to stand down…

Before I go any further I'd like to comment on Alina Urusa's cover for this issue – it's fantastic and possibly my favorite cover of the series so far. Firstly, it's great to see Huntress and Lady Blackhawk getting their time in the spotlight and I love her take on the two women – as formidable as they both are they have an air of vulnerability about them as they defend their corner and take on countless aggressors. That vulnerability is demonstrated by the slightly overwhelmed look on Huntress's face, the look of concern from Lady Blackhawk as well as the bloody cuts the friends are carrying. I'm not particularly familiar with Alina Urusa's work at the moment but I'll be seeking out more.

Onto the interior of the book – overall I felt this was a solid read, but no more than solid – at times very enjoyable and elsewhere, less so. So what did I enjoy?

Starting with the art – in places the characters, and notably the female characters had an almost anime-esque (pretty sure that's not a word!) look and, if this isn't new, it's something I hadn't identified before. This style was particularly noticeable with Barbara and Huntress and, if you'd told me this was the case before picking up the book I probably wouldn't have been in favor of it but, as I say, it really works for me. I wonder whether 1) anyone else feels that the art has this anime feel and 2) whether this style was a deliberate nod towards the geographical focus switching away from Gotham and into Asia.

Likewise, with Helena and Zinda in Bangkok, I particularly appreciated the sense of danger, movement and fluidity as the two women came under attack: as I've said before I tend to be a little indifferent towards long fight scenes but once again, for me, the creators – and I realizes this is as much down to the writing as the art – hit the nail on the head here with imaginative page layouts, largely scarce panels and minimal, appropriate, dialogue.

The story itself was certainly enjoyable – I liked how, despite being a new arc, we started off just where the last issue left off, almost by way of an epilogue, with Barbara vulnerable and her two companions lives seemingly in turmoil. I really do appreciate the pacing of the story, both in this issue and in the series as a whole: it moves along at a rapid pace – I don't think I realized quite how rapid until I started to write this review – moving from location to location, without on the whole feeling rushed.

As always, the dialogue is a particular enjoyable feature – as I've come to expect from Gail Simone every character's voice just sounds right to me. So far, all very positive I'd say…

It's very much a subjective thing I acknowledge but I was disappointed by some of the art in this issue – in places I just didn't like it and elsewhere I felt it lacked consistency. Huntress's appearance, in my opinion, changes several times throughout while the appearances of one or two other characters change also to the point that I initially found myself questioning who at least one of these people was. When, as was the case here, I'm jolted out of a story and have to remind myself that I'm reading a comic book, then I'm going to be a little dissatisfied.

Black Canary's 'journey' from cover to cover of this book was something that to me felt a little rushed – that said, I wholeheartedly expect that in subsequent issues we will get to see more of what took place between her leaving Gotham and her appearance in the books final panel. I'm not saying that for the wider story this wasn't completely the right path to take, but within this single issue it didn't quite land with me.

This felt a darker issue than some in the series although the fun element was never really too far away – Hanks reaction to discovering his hospital room full of flowers, and Dawn's response, made me chuckle while I also enjoyed the banter back and forth between Helena and Zinda as they came under attack in Bangkok.

In summary, as I say this was a solid read – while the issue certainly, for me at least, doesn't come close to hitting the heights of some of it's predecessors, if you're new to Birds of Prey and you started with this issue I don't believe you'd be disappointed.