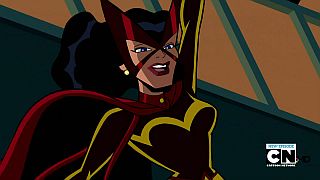 Before I begin with this review, I’d like to take a moment to talk about the series, Batman: The Brave and the Bold. The show returned recently from its mid-season break (I think that’s what it was anyway) and I’m excited to be bringing current reviews of the show back to the site, but first I’d just like to touch on what has come since the show’s return. The show has actually been really good recently. We had the much anticipated 2-part Starro episode, which they built towards through the first half of the season. Followed by an excellent episode about the Barry Allen’s death, featuring none other than John Wesley Shipp as Professor Zoom! (He was the actor who played Flash in the sadly under-appreciated but awesome live action Flash show from the 90’s, which I love!) We then had an episode about the Doom Patrol and all I will say about that one is holy surprise ending Batman! We were also treated to an episode about Matches Malone, that also included a musical number by the Birds of Prey. Need I say more? After that was a pretty good episode about Batman, Booster Gold, and Ted Kord, the original Blue Beetle. And finally, the previous episode was an adaptation of Emperor Joker! If you haven’t seen that one yet, I strongly recommend you seek it out, because it was very good.

This brings us to the episode I’m here to talk about today, “The Criss Cross Conspiracy!” Diving into the episode let’s tackle the teaser. Batman and the Atom are stuck in miniature size fighting Bug Eyed Bandit. But help arrives in the form of Aquaman. The rest of the teaser is just Aquaman acting stupid while the Atom tries to dumb down his requests so that Aquaman manages to save him and Batman. The whole thing reminded me of the season 1 episode “Journey to the Center of the Bat!”, but not as good. So nothing really cool, new or exciting with this teaser. Fortunately, the main plot fairs much better.

Ten years ago, one of The Riddler’s crimes was interrupted by Batman, Robin, and Batwoman! We quickly learn that Batwoman is not like the Dark Knight, and is more interested in the thrill of crime fighting than the good that comes from it. She easily takes down Riddler, but in return, he rips off her mask exposing her identity to a crowd of reporters! Batman and Robin take off, leaving her humiliated. In the present day, we see her watching Batman take down a more obscure member of his rogue’s gallery; The Spinner. Over the radio she hears that the Riddler is out of jail, and decides the time to exact her long awaited revenge is now. Using a spell obtained from paroled sorcerer Felix Faust, she swaps bodies with Batman! Posing as the Caped Crusader, she sets out along with Nightwing and Batgirl to take down the Prince of Puzzles permanently.

This was definitely an enjoyable episode. It was nice to see Batwoman finally introduced, since we’ve already seen almost all of the bat-family, right down to Ace the Bat-Hound. However, this is not the Batwoman you are familiar with. While she has the costume from the 50’s she is notable different. Here she pretty much is the villain of the episode, even more so than Riddler. She’s got her eye on revenge, and has no problem with the idea of killing him in cold blood. Her alter identity is different as well, rather than Kathy Kane, here she is Katrina Moldoff. This is a reference to Sheldon Moldoff, the artist who created Batwoman in 1958. Well I certainly didn’t expect her to be a villain, I like that they did something different with instead of just recreating the silver age character. But it’s a bit jarring to see her introduced in the show, get unmasked, and become a revenge crazed villain all in about 18 minutes. I wish they had introduced her and established her more thrill seeking and reckless crime fighting in a previous episode’s teaser. Also, I have to wonder why she waited 10 YEARS to get revenge! I’m sure the Riddler’s been in and out of jail at least 50 times since then! I realize it’s only a nitpick, but it seems kind of dumb nevertheless.

The real fun in the episode comes from Batman and Katrina switching bodies. It leads to some really great lines from both characters:

“Tell me something, and I need the absolute truth. Do I look fat in this outfit?”

“Clearly my new center of gravity is much…higher.”

There’s also some hilarious sight gags, such as Batman-In-Katrina tripping when trying to walk in high heels.

There’s a few other references included, such as a famous line from Batman Forever. And apparently Nightwing is deathly afraid of monkeys. I’d love to know the story behind that.

So overall, this is a pretty good episode. The teaser is lacking, and the main story's a little boring at first. But once Batman and Katrina switch bodies, it becomes really interesting and fun. Not the best episode of the series, but by no means the worst. Please feel free to comment and say what you thought of the episode.