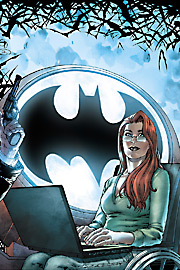 This seventh part of the 8-part 'Bruce Wayne: The Road Home' series of one-shots launches with a head-and-shoulders splash page of Barbara Gordon – Oracle of course – bathed by the soft green light of her computer terminal. 'Oh crap' she says out loud, and at the same time to herself, as she's monitoring the activities of The Seven Men of Death.

In need of support Barbara hacks into the com unit frequency of the mysterious man who has come to be known as The Insider – from earlier issues of 'Road Home' we know The Insider is none other than Bruce Wayne.

Brushing aside the question of how she hacked the com unit frequency Babs goes on to explain that she knows who's after Ms. Vale as The Insider explains that he's currently with the reporter and that if she's to remain safe he's going to need 'some distractions'.

As The Insider – or should I say Bruce? – and Vicki Vale venture out into the city Barbara sets to work on the details of her distractions. With Black Canary, Huntress and Lady Blackhawk – the 'usual suspects' we're reminded – currently overseas on 'Birds of Prey' duties Babs pulls up the files of her other 'assets' including Hawk, Dove, Man-Bat, Ragman and Batgirl Stephanie Brown while thinking about The Insider.

Almost matter of fact Barbara reveals that she's sure he's Bruce Wayne she just doesn't know how that's possible. Just as quickly she reconciles his 'death' and return as an almost everyday thing: Superman, Green Arrow, Superboy, The Flash … only Bruce has the sort of 'commanding presence' she's witnessing.

Flashback to a time with Barbara lying in a hospital room. As Bruce enters the room she harshly tells her visitor to go away, that she's done enough for today. When he refuses to be sent away Babs, failing to look at Bruce, tells him there's nothing he can do for her, that he can't fix things this time – 'you can't give me my legs back'.

Dropping the vase of flowers to the floor to grab her attention Bruce explains that he's not prepared to allow her to give up. He goes on to explain that he understands what it's like to suffer loss and acknowledges that his own loss as a child defined his entire adult life and, as such, he's qualified, entitled even, to offer advice to his friend.

Bruce tells Barbara that as far as he is concerned she'd always been more than a 'costume' and while she may no longer be Batgirl she has two choices – to overcome or to wither and die – either way the choice has to be hers.

Choosing the former, we see Babs building up her physical and mental strength until such time as she's ready to unveil her base inside the Gotham Clocktower to Bruce who in turn reveals that he didn't 'expect anything less' from his young friend.

Jolted from thoughts of her past Barbara is greeted by Stephanie Brown – Batgirl – along with Hawk and Dove – Hank Hall and Dawn Granger – on her monitor. Bringing her team up to speed on the situation regarding Vicki Vale Barbara sends coordinates to her colleagues before patching into the Gotham City Police Department radio frequencies and 'planting' details of fake sightings of Ms. Vale across the city, suspecting that the broadcasts are being monitored by more than just the police force.

Sure enough, the Seven Men of Death hear the locations – St Bernadette's Cathedral and the Atlas Liquors Warehouse – split up and set out after their prey …

As the first group of assassins arrive at the Cathedral they are immediately confronted by one of Barbara's make-shift teams – Ragman, Man-Bat and Manhunter – as Batgirl, Hawk and Dove tackle the second group at the harbor side warehouse. As fists, and the inevitable quips, fly The Insider and Vicki Vale are spotted elsewhere in the city running for safety. With Ra's al Ghul having issued a 'dead or alive' order the pair come under heavy artillery fire that stops them in their tracks – with Bruce grounded and injured he implores Vicki to get to safety.

Returning to the Seven Men of Death and despite their division they are proving more than a match for Barbara's teams – Ragman is overcome, Dove is grounded and apparently unconscious, Batgirl finds herself at gunpoint – before brute force, superior combat skills and no little cunning from Dove eventually proves victorious.

In the meantime, The Insider overwhelms Vicki Vale's latest pursuer and demands to know why Ra's al Ghul is hunting the reporter … and, in a peculiar case of twisted logic, it transpires that Ra's believes is protecting Batman's identity by silencing Vale.

With the 'hitman' himself now silenced The Insider checks in with Oracle regarding Vicki Vale's current location. With the 'Seven Men' taking care of Barbara reassures him that she has every confidence that he'll find her … and she let's slip that she knows the true identity of The Insider, much to Bruce's surprise.

Across the city we see a now desperate Vick Vale smashing her mobile phone – just in case the signal could be used to track her – and heading for a public pay phone where she calls Alfred Pennyworth. No sooner does Alfred answer than Vale is snatched away, leaving the telephone handset hanging.

The issue concludes, as is customary throughout the 'Bruce Wayne: The Road Home' issue, with extracts from Batman's White Casebook where he ponders whether his return will cause more trouble than his absence, and signs off in determined fashion by declaring that he has a job to finish …

Reviewing this book hasn't, I have to say, been an easy task. As with 'The Road Home: Batgirl' title I initially took the 'One Shot' statement from the front cover on face value and read the issue before reading the other 6 'one shots' in the series (if indeed a series can consist of a number of one shots!). Unlike the Batgirl installment this issue didn't, in isolation, satisfy me although as the seventh part of an eight part tale I found it to be an excellent, immensely enjoyable read.

I'll start with the cover from Shane Davis and Barbara Ciardo and once again find myself making comparisons with 'The Road Home: Batgirl' – as part of the eight part montage the image of an older Barbara than I'm used to seeing sat in front of an illuminated Bat signal with her father one side of her and members of The Outsiders on the other I thought the image looked fantastic. As a cover in its own right it just didn't sell the book for me – Barbara, to me, doesn't display the usual energy and drive that I've come to expect from her and visually she's overwhelmed by the size of the Bat signal behind here. I'm certainly not saying that the cover is badly drawn – as I keep saying, as with any 'art' illustration is an entirely subjective form – rather that the composition of the page, and the balance between a stand-alone image and one-eighth of a larger image just didn't work for me.

Onto the story itself – viewed in isolation I think my main disappointment was the moment when Barbara revealed that she knew precisely who The Insider was. Given their 'special' relationship I think I'd anticipated something more dramatic, more pointed, than Barbara's slip of the tongue when she addressed The Insider as 'Bat …' – before correcting herself. In the bigger picture we learn, I believe, that Barbara actually figured out – or started to figure out – The Insider's true identity in the previous One Shot of 'The Road Home' (Commissioner Gordon) and as such it makes a little more sense that Barbara has had time to consider just what Bruce's return could mean.

I thought some of the stand-out moments of the storyline were split between the opening pages of the book, as Babs trawls her files to discover who she has available to take on Ra's al Ghul's men – of course timing couldn't have been much worse with a number of her strongest assets in Asia taking care of Birds of Prey 'business' – and the all too brief interlude that showed how Barbara had responded to some 'tough love' from Bruce. Flashbacks can be an overused storytelling device at times but I thought here Marc Andreyko used it perfectly to convey the feeling that Barbara was, for a few short moments at least, overcome with her own thoughts, memories and emotions.

The hand to hand combat scenes in the Cathedral and warehouse went on a little too long for my personal tastes – six pages out of 22 meaning for me the impact of these scenes becomes somewhat diluted as they played out – although I certainly got a sense of the chaos and uncertainty thanks to the imaginative page layouts, super dialogue and vibrant colors.

The interior art, courtesy of Agustin Padilla, throughout this issue was an absolute joy – the bar was set with the fantastic first page head-and-shoulders portrait of Barbara – certainly capturing not only her youthful beauty but also her determination, motivation and dynamism. Likewise the scenes set at the hospital and featuring Bruce and Barbara conveyed a real sense of escalating foreboding before, with a subtle change of color tone, capturing an atmosphere of determination, optimism even.

Between them Andreyko and Padilla did a fantastic job of capturing the 'essence' of each of the featured characters: not always an easy task when you are essentially guesting on a book. Hawk and Dove, Stephanie Brown's Batgirl, Barbara Gordon's Oracle of course, all looked, sounded and behaved as I've come to expect and appreciate in the regular Birds of Prey and Batgirl titles.

So, in summary, did I enjoy the book? Absolutely I did. Do I take issue with the 'One Shot' tag that adorns each of the titles in 'The Road Home' storyline? Yes, I do.

For me 'Bruce Wayne: The Road Home – Oracle' was a decent enough read when judged on its own merits, and any fan of Barbara Gordon would enjoy the book I'm sure: although, despite the title this didn't feel like a Barbara Gordon/Oracle-focused book.

Just possibly, however, like me you may need to read more or all of the 'Road Home' issues to fully appreciate the greater story that's being told – and there is truly a great story being told.