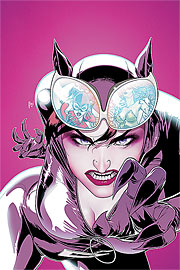 Gotham City Sirens #2 picks up right where #1 leaves off with Catwoman tied up by Poison Ivy asking who Batman is. We then cut to three years ago and Talia telling Selina that being one of only two woman who Bruce has ever truly loved, she gives Catwoman the power to lie to herself about Bruce’s true identity as Batman.

What follows is a page of Selina going into a trance, remembering some of the horrible things that have happened over the past few years, dealing Hush, Jason Todd, and Black Mask and most heartbreakingly, losing her daughter. Selina begs Ivy to stop, to which she refuses and says Selina has to prove her friendship. Ivy asks if she wasn’t tied up, would she tell the truth, Selina says “Hell no” and goes back to trying to get into a state of mind where she can hide the truth. Selina then tells Harley and Ivy, Batman’s true identity, Bruce Wayne, Jim Gordon, Harvey Dent, Slam Bradley, and many more. Selina then tells her new “Friends” that one man could not truly be as driven as Batman is. Because of the mental state she put herself into, Ivy has no choice but to believe her and Harley follows along.

The story then goes ahead to Harley going for a walk and seeing Bruce Wayne, or what the world believes to be Bruce Wayne being kidnapped, and Bruce, or as Harley calls him B.W, she has to help him as she owes him. Bruce Wayne, in case you haven’t read the Heart of Hush storyline, and are not currently reading Streets of Gotham, is really Tommy “Hush” Elliot. Hush who still is mad about what Catwoman did to him at the end of Heart of Hush when she successfully ruined Hush and took all of his money, wants revenge on her and everyone who she got help from, two of these people being Poison Ivy and Harley Quinn. Hush finds out about Harley living with Catwoman, and being driven by his lust for revenge he uses Harley as bait to get Catwoman and Poison Ivy and get the revenge he desires. We end with Selina and Ivy going after Harley looking for her, with Selina filling in Ivy about how Harley is in danger as the man she is with is not really Bruce Wayne, he is serial killer, Hush. The issue ends with Selina and Ivy finding Harleys phone, and a Harley doll with a knife in it.

This is a good issue, it’s not great, but it’s an improvement on the first one, the writing for this issue is more to the point than the first one. However the way Dini gets out of the cliff hanger from the first issue, that Talia taught Selina a few years ago how to hide Batman’s secret identity was just annoying to me, the use of this felt like Dini was told “You can’t have them know who Batman was” and he was left with twenty minutes to work out some answer and just gave some half a**ed option and it shows. That is the only true low point of the issue and except for the pay off of issue one the writing is solid.

The art by Guillem March is a lot better, it doesn’t feel as cartoony as the first issue, it does feel cartoony when dealing with Harley, but the rest of the issue, feels like strong and is nice to look at, but is nothing spectacular. So the art is ok when comparing getting punched in the face and getting lightly slapped, it still hurts, but not as much, which is like the art here, it’s not great, but it’s better than the first issue, so March is getting better.

Overall, this is an ok issue, it isn’t a comic I’d say go out and get right now, but if you see it in a 50p and need a batman comic to read, you can do a lot worse.