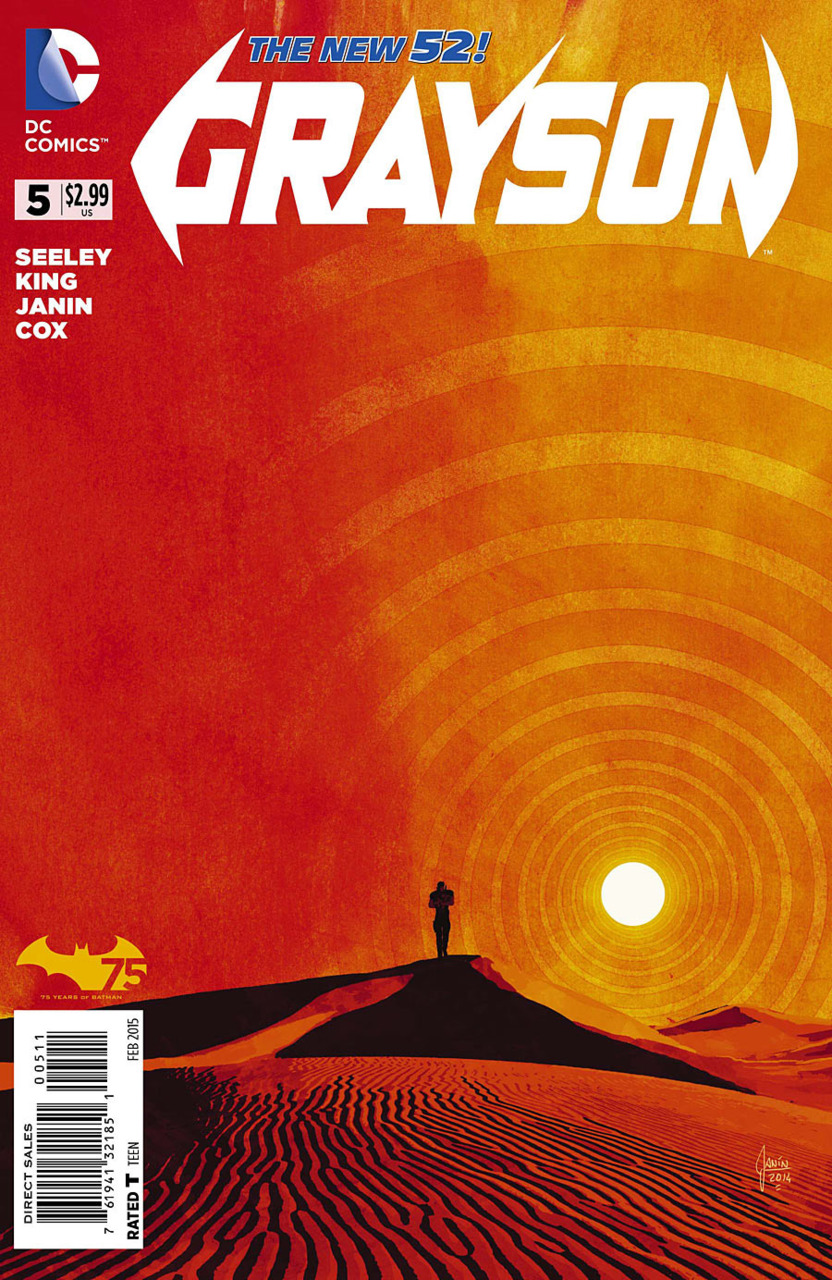 This issue opens in mid action sequence. A plane is falling from the sky and inside we find Agent 37 (Dick Grayson) and Midnighter helping an unknown, pregnant woman give birth…while Helena is at the controls, desperately trying to get the plane back under control. Dick seems to be pleading with the woman to stay with them as she’s giving birth. Midnighter and Dick argue about the events that seem to have transpired before we were dropped into the action – it seems that Dick and Helena were attempting to “kidnap” the unknown woman when Midnighter showed up to stop them…this led to some sort of altercation that alerted A.R.G.U.S. to their location…thus leading to the damaged and falling from the sky plane.

The plane eventually crash lands in the desert with Dick’s pleas of keeping the mother alive. When the dust eventually clears, the mother has died in the crash but not before giving birth to her child. The trio agree to make from the nearest town which is at least 200 miles away. We are then treated to a lovely montage of walking through the desert, with Dick carrying the newborn baby.

Several days pass, and we cut to a scene at night where Midnighter is talking about the baby in cryptic ways…mentioning that they have “the heart” which contains some kind of energy (this is kind of where the issue goes sideways, and becomes unclear as to what Spyral and Stormwatch would want with this newborn). Midnighter threatens Dick and reveals he knows who he is, since the A.R.G.U.S. EMP knocked out their hypnos which keeps their faces disguised.

The next day we have some more walking through the desert where Helena finally collapses due to lack of water and the wounds she sustained in the crash. Midnighter and Dick agree to leave her behind, but not before Dick makes a mock tent out of his shirt and escrima sticks. The two men move on where Midnighter once again taunts Dick and asks whether he believes Spyral will allow the baby to keep “the heart.” Dick angrily knocks Midnighter down and continues moving.

Several more days pass, and Midnighter finally collapses from exhaustion. Dick walks back to his side and places a canteen of water by him…and then turns around and keeps walking.

Over the next several pages, Dick begins telling a story about a dream that he had to the baby. In the dream, he and Batman were on another world. Dick was Robin and had to free Batman from a living tree that had captured him…eventually they escaped and encountered a giant, alien robot that was purple with pink eyes. The robot chased them, and Batman and Robin had to swing across a cliff on another tree…they then attempted to lure the giant robot towards them to fall into the chasm between them. Realizing that it wouldn’t go for it, Robin began taunting it until it eventually fell to its doom. It is here that Dick begins to finally succumb to the heat and begins to mumble about falling rocks. He eventually passes out.

The next day, a truck drives up and two unknown individuals come out the car and are surprised and seemingly thankful about finding the baby in Dick’s arms. The woman seems to think that God has delivered this child to them.
We then cut to Spyral the following week, where we see Mr. Minos talking to Frau Netz about Dick and Helena’s recovery. It seems that Spyral eventually found all three unconscious agents and rescued them…Midnighter eventually being traded back to Stormwatch for a captured Spyral agent. Minos regrets that the child and “the heart” were lost in the crash. The issue closes with an image of the newborn baby laying in a crib holding the cell phone of one of the people that found it…and then crushing the phone in its hand.

Well, another interesting issue of Grayson. This definitely is better than the last issue and asks some interesting questions about the motives of the Spyral organization.

I did like how we were thrown right into the action, but there wasn’t a sufficient explanation about why Spyral and Stormwatch would be after some random woman and her unborn child. Throughout the issue, Midnighter references “the heart” several times and seemingly implies that the heart of the child has some type of energy that both organizations want…or at least Spyral wants and possibly Stormwatch was trying to keep it from them. A.R.G.U.S. is also thrown into the mix and complicates the plot further as they seem to be responsible for the crash landing plane. The writing overall was good…but the gaps in the plot leave much to be desired in terms of what was actually going on.

However the highlight of the issue for me has to be the call back to a Golden Age story entitled “Robin Dies at Dawn.” As Dick explains in his story, he has a dream about himself and Batman being on a strange planet where they battle living trees and giant robotic monsters…and at the end of the story Robin ends up dying when he gets crushed by a falling rock. It’s interesting to note that this story resurfaces as a dream that Dick has had, where in the original story Batman was experimenting in a deprivation chamber for several days and hallucinated the events of Robin’s death. Even the title of this issue “We All Die at Dawn” harkens back to this story. (For those interested, look for Batman #156 reprinted in “The Black Casebook” for the original story) It’s not clear why the writers chose to include this parallel…maybe we’re meant to think that much of this story didn’t take place? Maybe it’s all happening in the baby’s mind? Who knows? But it was definitely a neat Easter egg for those who have read that particular story before.

The last thing of note is that there is a strong parallel made between this baby being found in the desert by a couple…and another baby that was sent to Earth and found as well. The newborn baby exhibits extreme strength and crushes a cell phone in its bare hands…I’m not sure why we are meant to draw a connection between this child and Superman, but maybe this will become clear in future issues. My only fear is that this was simply a strange one-off issue, but I hope that we will get to see why Spyral was so interested in this child and its “heart.”

Overall this issue was intriguing, the art was well done and the splash pages of the desert walking (although boring story wise) was very cool to look at…and the layouts were well done. I hope that these storylines don’t get dropped, otherwise I’m going to be extremely disappointed that we’re given an issue that raised a ton of questions and then didn’t answer much by the end.

Also, Dick yet again finds a way to take his shirt off…hopefully this doesn’t develop into a trend every issue.