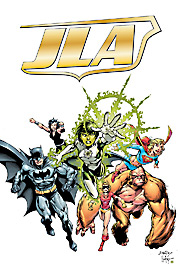 Before we begin this review of JLA #53 which concludes the “Omega” storyline let’s take a quick look at how JLA #52 ended.

With Batman on his knees.

You read that right. Batman on bended knee, hands out and head bowed in supplication.

“I kneel before the Omega Man.”

Now in today’s abbreviated parlance that is a real “WTF” moment. So when I picked up my copy of JLA #53 this past week I was eager to see how low the Caped Crusader was willing to stoop. (Sometimes I really need to repeat to myself, “It’s only a comic” over and over.)

So how does this issue start you may ask? With Donna Troy getting a jaw realignment courtesy of her opposite number from the Crime Syndicate. Yes, a cat-fight in the appropriately attired cat suits. To make matters worse Troy treats us to an inner monologue of how tough a life she has had and how sad she is. (Again, are you kidding me? I know, it’s only a comic. Keep repeating that!) You see this is hard to swallow considering how beautiful she is and how powerful her capabilities are. Happily, Dark Supergirl, who has switched teams to the Crime Syndicate, ends Donna’s pity party by laying her out and wanting to get on with her share of world domination with the bad guys.

Time out! So what is really going on here?

Subterfuge my friends subterfuge. It’s a theme here. Donna crying about herself? Batman on bended knee? Supergirl switching teams? As the Joker said in the last movie, “It’s all part of the plan.”

And so it was. The Dick Grayson Batman who is the de-facto leader of the JLA had an ace up his sleeve the whole time. Supergirl was his eyes and ears in the enemy camp and afforded Batman, with the aid of new ally, Blue Jay, the time to re-engineer the Crime Syndicates device to send them back to their own world. Only Jade was slow on the uptake calling out Batman for cowardice and being disgusted at his behavior.

Batman also held in reserve the Green Lantern from the other dimension and used her powers of re-animation to bring back Alexander Luthor. Luthor worked with Batman to reverse the energy he created and shut down the effect the Crime Syndicate and Omega Man were using to pillage and destroy the many worlds they came across.

This story arc was by regular JLA writer James Robinson. Robinson has been exploring the dynamic of the new JLA as most of these heroes have long been understudies to greater champions. Hence themes of self-doubt, leadership qualities and confidence under duress have been deeply examined. Robinson has allowed his individual players to work out their supposed shortcomings by providing them with opportunities to maximize their individual strengths in a way that can only be successful if they act in unison. Let’s hope Robinson continues this journey of discovery for his nascent crew of champions.

Word is, this marks the last issue for penciller Mark Bagley. Bagley has been criticized for his “rough cut” style of drawing and perhaps under-sizing the look of his super heroes. But frankly it works rather well here. This is a team book and no one hero should stand apart from the rest and that fits perfectly with Robinson's approach. Bagley will be missed in these pages.