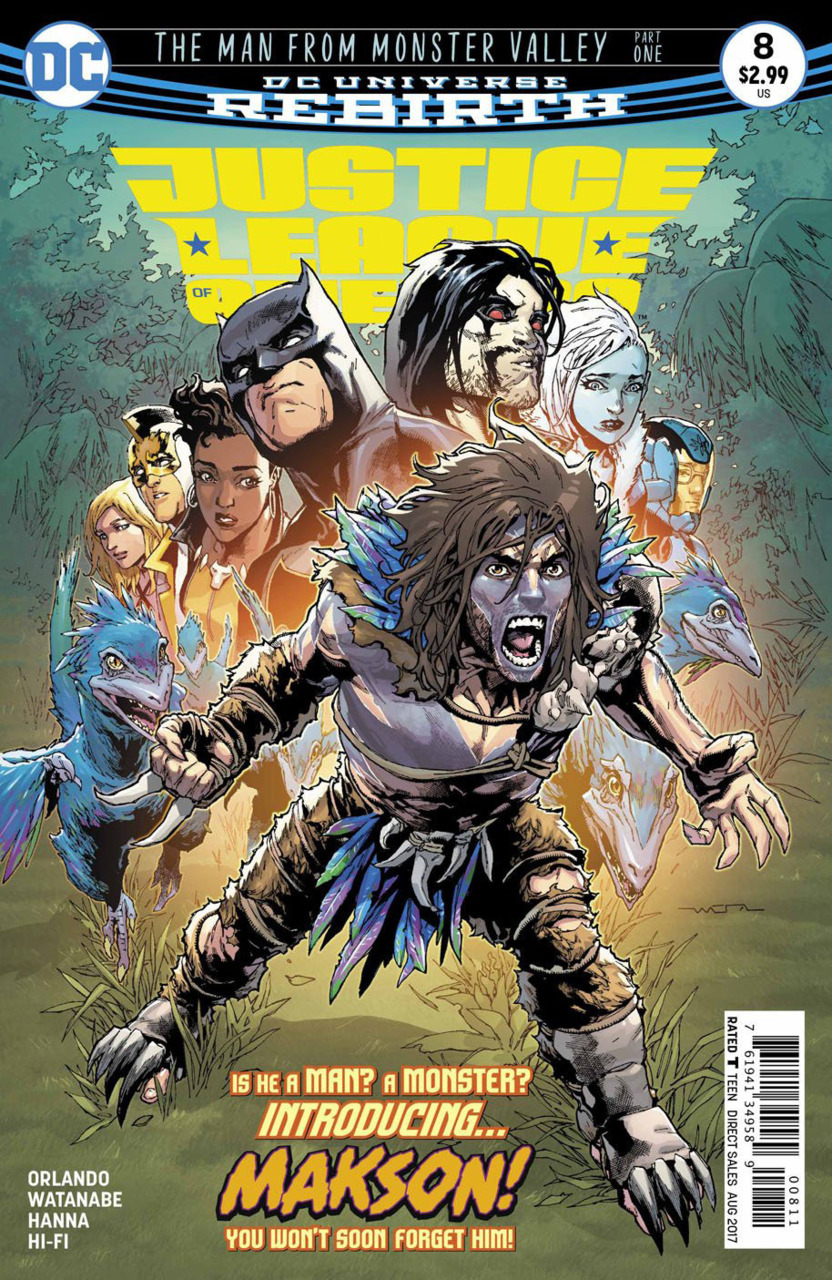 (Spoilers ahead) The story opens in the mysterious “Monster Valley” where a team of S.K.U.L.L. agents are attacking Makson, a Tarzan-like figure who had been living among the dinosaur like creatures of the Valley.  Makson is rescued by the JLA, who came to the Valley following the S.K.U.L.L. agents.  The story flashed forward to a few days later where Makson is appearing on a talk show, having become a celebrity since his rescue.  Makson, now wearing a suit and speaking English, announces that he has found his human name, Brenton Hamilton and that he is heir to a family fortune and invites all of his living relatives, all 684 of them, to a gala.  Batman is suspicious of Makson, and goes off to investigate him with Black Canary and Lobo, which causes a rift with the rest of the team who believe that the JLA should be trusted.  The issue ends with the team discovering that the S.K.U.L.L. agents had been sent by his family to kill him and Atom discovering that Makson plans of killing his entire family.

The basic plot of this story is fairly straightforward.  This is far from the first time that a comic has used the Tarzan archetype as a springboard for a story and this one is…  another one.   Its not poorly executed by any means, but there’s no surprises in this story.  The moment the story moves from Monster Valley to Makson appearing on a talk show is jarring and immediately gives the reader the sense that there’s something wrong with Makson and the “twist” at the end of the issue comes off as expected.  There was no point in the story that I didn’t think that Makson wasn’t up to something and the story would have benefited from more of a slow burn.  If Orlando had spent more time establishing Makson over a few issues then his villain turn at the end of the issue would have been more unexpected.  The lost jungle filled with monsters trope is also something that has been seen before in everything from King Kong to the X-Men’s Savage Land.  I don’t object to it being used here, if for no other reason then I enjoy a good monster fight, but the concept feels glossed over and rushed and the story moves forward to quickly.  It’s as if the story started with the second issue in the arc without spending the time to set it up properly.

While the story isn’t particularly original, Orlando continues to push forwards with the themes of the JLA being about inspiring people and giving second changes.  Having the team arguing over Makson’s true intention’s does come off as forced and makes Frost and the Ray in particular come off as a little too naive.  Batman’s role in the team continues to be a subject of conversation in the book.  It continues to be a strange notion for Batman to be in charge of a team that does press conferences and tours of their headquarters and the book doesn’t seem to miss an opportunity to call attention to this.  It’s clear that Batman’s motives for starting this team have yet to be revealed. Given that the same questions have been raised in other books like Detective, it feels like more of an editorial note than a plot point and I wonder if its one that will be resolved here or if it will be fleshed out in one of the big event books coming later this year.

Felipe Watanabi handles the art chores well in this issue.  I still find myself wishing that the art in this book was a little more consistent as the frequently changing artist is jarring from book to book, but as long as the book remains bi-weekly, that seems like the cost of doing business.

In summary, the issue is fairly middle of the road and while still entertaining, has too many ideas that have been done better elsewhere.