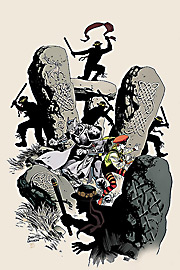 Remember how last month I thought Knight and Squire #1 was awesome? Well, #2 is….nowhere near as good. I mean sure the opening sequence with Beryl in a newsagents buying a magazine was good, and sure the Knight Cave looked cool, but after that, the book just falls apart.

The story of the issue is Knight and Squire versus a black magic wielding Morris dancer, and how do you make that dull? Easy, you don’t actually have them facing the black magic wielding Morris dancer! The issue is mostly harmless dialogue and background of this villainous Morris dancer and what this sinister villain is doing….which from what I gathered is being old fashioned and a bit annoying, oh and a spot of murder, for some reason.

Anyway, the issue is very basic, and if it sounds like I’m scraping over the plot, it’s because I did not like this at all. I felt cheated by this book; it isn’t till about 2/3rds through the book do we actually get to see the villain of the book, and even then, bugger all happens.

Knight and Squire come to the villain’s hideout and go to attack him, only for them to be surrounded, which the Knight laughs off and says he called the police, in a sequence I found actually funny. You wouldn’t find Batman asking the police for help, but Knight does, and I liked that. Sadly that was the only thing from the actual story that I liked. However, we get a cop-out ending where the evil Morris dancer runs back to his own evil dimension, which actually got me to say something not very nice about the book, something I don’t think I’d be allowed to repeat on this website.

The art by Jimmy Broxton on the other hand, was great; it really was fun and felt like the British equivalent of the 1960’s Batman TV show. I enjoyed looking at the pages, and really is a shame that the reason I was there, the actual story, which looked good in concept, just didn’t even go anywhere.

This may be a short review, but as you can hopefully tell, I was really disappointed with this issue. Whereas the first issue had character coming out of all corners, this issue feels flat and short. A bit like this review, so for that reason, Knight and Squire #1 got a four out of 5 but this issue will just have to settle with:

The Hole in Things: A History of Simon...