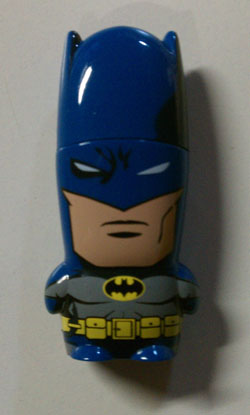 The fine folks at Mimobot have sent over one of the announced Batman flash drives. We announced these devices back when the company first revealed them in January. And while it is a USB 2.0 Flash Drive and works just like a normal Flash Drive the interesting thing about this is the design of the enclosure. This specific model is based of Batman using his appearance in the blue bat-suit. You will also find the classic bat-symbol emblazoned on his chest with the yellow oval present. The backside of the device even shows the creases where the cape would hang. The top piece has a shadow effect casting across Batman's head. While this looks great, it is even up to normal standards of USB Drives having a light as well that lights up when plugged in and blinks when files are being accessed or uploaded. The downside is that the device seems to be backwards with Batman facing down towards the ground when plugged into the computer. Now this will depend on how your computer is sitting, but with my laptop, I can only see the backside of Batman. This is probably intentional since the light is also on the backside and the light would take away from the overall effect of the look of Batman from straight on. None the less it does fit perfectly into the USB slot on the computer with concern for other devices. It also is a little easier to remove since it has the arms on the sides.

The Mimobot USB Flash Drive is also packaged very well in a yellow and black box that finds itself with raised bat-symbols all over the yellow area. The back also shows some of the other characters available including Joker, Catwoman and Robin. These are all part of Wave 1.

The device also comes with pre-loaded avatars, screensavers, wallpapers and icons. You can transform your computer into a Batcomputer by using the things provided. There are unique items specifically made for Mimobot including a screensaver in various sizes depicting Batman and Robin trying to stop Catwoman and Joker in various acts of crime all portrayed by the actual Mimobots.

Overall, while you expect it to be a little eccentric since it is a flash drive, it is a unique addition to any Bat-Fan's collection. And if you need an excuse to add it to your collection it also provides practical use as well.

Currently these are available directly from Mimobot on their website. There is also a modern version of Batman available, but in limited quantities.