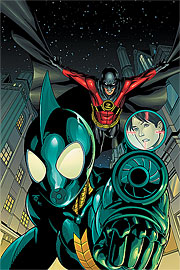 Red Robin #15 is carrying on Fabian's first storyline of the series, with Tim Drake in crutches going to see the resurrected Captain Boomerang, who murdered Tim’s father in Identity Crisis. The real question I had when I saw this page was why was Tim Drake in crutches?

In this issue, Fabian takes care of the problem he set up in Gotham Gazette of Vicki Vale finding out the Bat-Families secret identities. You know the thing that Chris Yost could not be bothered to deal with in his “fantastic” run on the comic. Well, about a year and a half later, we finally see resolution to this issue, even if it has really achieved nothing, but I am glad that Fabian is tying up a loose thread rather than leaving it be.

The issue has Fabian creating another new rogue for Red Robin in the Scarab, sadly this rogue is useless and foiled by the end of the issue, so in other words, will probably never be heard from again. Shame, she looked like she could be a good character, but Fabian seems to have a bigger plan involving Anarky going on, who was the villain from the last few issues of his run on the old Robin title.

Anyway, back to the crutches and Vicki Vale thing. Tim decides to take care of Vicki Vale by staging a stunt where he will be crippled by Scarab during a press conference, with Vale in attendance. It’s a good idea, even if the playing out of the idea is a bit awkward, and would make the reader say, what a cop out. Tim uses a stunt double to trick Vale that he cannot be Red Robin if Tim has to walk around in crutches all the time. It’s stupid, but it’s better than bringing Vicki Vale into the Bat-Family and letting her know their secrets.

The art here as always with Marcus To is solid and dependable. There truly is nothing more I can say about it, good art, nothing more, and nothing less.

I said last month about how I don’t want Tim to regress back to who he was and to stay his own man as Red Robin. Sadly, Tim has to discuss his plan with Dick and how he almost needs Dick's approval. We also have a mildly interesting scene where Batgirl, which would have worked if Tim were still Robin, but Damian is Robin now. Maybe that’s just a nitpick though.

I do look the fact that Tim will be going up against Anarky in the next few issues. Looking back on the last few issues of Robin when Tim took on Anarky, Anarky beat Tim as Robin, however Red Robin beat Anarky, so it’s obvious Anarky would have a score to settle with Red Robin instead of just going after Damian.

All in all, this series is getting back on form thanks to Fabians writing. A couple of issues ago I would have said Tim was a character in the DCU that I really hated where he was going, with his emo attitude and self depreciating “I can’t do anything right” attitude. Fabian is attempting to fix that issue here; sadly he has a lot of stuff to fix before Red Robin can truly be seen as a solo hero in the DCU in my eyes. But if anyone can save Tim Drake, Fabian Nicenza and Marcus To can.