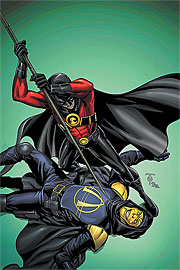 Red Robin #16 is a book of two halves for me. On the one half under Fabian Nicieza it is a fun book, that always delivers when it has to, at least so far in his five issue run. However on the other hand, my old complaint of it being a book about Tim being Robin again in all but name still annoys me.

This issue deals with Tim taking care of the new Anarky, who was the old General, who wanted to be Tim’s Joker, confused, if not it must just be me then, as I read the storyline in the regular Robin series, and I didn’t care about Anarky then, and I still don’t care now.

Now to say this issue focuses on no character development would be a lie, as we see progression between Tam Fox, and Tim Wayne, in a scene that really feels like something I’ve read lots of times before, the love interest saying to the hero how their voice changes when they talk about the mission and all that. It was probably just me, but I actually liked the idea of Tim having a hit list of people he was after, and rather than continuing this, we have a sort of fill in where Anarky shows up out of nowhere and causes chaos, by killing two people, who I don’t care about. If it sounds like I’m being harsh on this issue, its cause I am. Although it was a fun read, it was the first issue under Fabian that felt unfulfilling to me, everyone is allowed a miss-step, but really here, it’s not so much a miss-step as it is Fabian trying to ram a character into the readers face and say that he is Tim’s Joker, he even says it during the issue, and of course, in a spoiler Anarky gets away in the end. I held up my fist to the comic at that point, and shouted “I’ll get you next time gadget…”

Also, the issue ends with a fantastic error when we are invited to read next month when Bruce Wayne returns home. Yes, Bruce Wayne is back in town. I can hardly wait.

Art by Marcus To is as always great, he is slowly making his way up my favorite artists list. I won’t be buying a book for his art alone yet, but his name on a book will peak my interest. And of course Fabian’s character writing is as always steady and works well; however it is never anything to write home about.

All in all this is another solid, if the weakest issue of the five issues so far in this, Fabien’s run on Red Robin. In the tags we are not only told about the return of Bruce Wayne, which will have art by everyone’s favorite guy Ramon Bachs, and then the month after to see Tim find a new place to live. And hopefully, with that new place to live, Fabian will actually take the time to get Tim out of the Robin mold and make him his own hero, as to me, it isn’t happening soon enough.