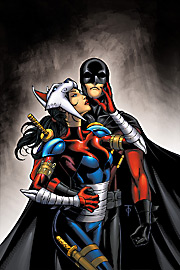 Red Robin #17 is another solid issue from the series, that I am really starting to enjoy thanks to Marcus To and Fabian Nicieza. The art is always solid from To, and the writing for the most part has been good, apart from one or two issues which have been poor, most notably the Road Home issue, but that was last month, and this is November.

The issue doesn’t really have much in the form of action as it does having a few quick, set up sequences, sequences that I enjoyed, so I will now sum them up for you now:

*Cassandra Cain is given her old Batgirl costume, even though she doesn’t really want it. Making me wonder, why I was supposed to care about Cassie, having never read a single comic with her in it, and her never being mentioned in Red Robin until this very issue, which was weird.

*Tim leading a normal teenage life, well about as normal as a billionaire's adopted son, who’s just came back from the dead, and now the son has to pretend to be in crutches for the next few years to hide his secret life as Red Robin. You know the usual.

*Tim deciding to let Lynx (The woman on the cover) out of jail and proceed with her life as Lynx, as he thinks she’s an undercover cop. Don’t really care about the sexual tension between these two, as it not only feels like the next generation Batman/Catwoman relationship, it IS the next generation version, and I couldn’t care less about Lynx right now.

*Finally we have a sequence featuring Bruce Wayne in his new Batman costume, which hasn’t yet been revealed in the main Batman book, so that’s just dandy. This is followed up by Tim hugging Bruce, and saying he’s glad he’s back. Followed by Tim following Bruce to go fly through the city Spider-Man style, before checking off the next thing of his to do list, which is “Figure out who to do it with…” I didn’t really get this sequence during the first read through. It did nothing for me, and  I just thought “Oh…ok. Nice of you guys to take your masks off….not like the city is full of people with camera phones…and they are incredibly common these days” was my first reaction, however on second reading I said “It's a father and a son…it’s supposed to be a heartfelt scene." I still don’t like it. Yes, I get the whole point of this being a big moment for Tim, and Bruce actually liking Tim and respecting him, but I would have much preffered if Bruce just said “I’ve got work to do….you coming, Red Robin?” But hey, that’s me.

Onto the art, Marcus To is as usual consistently good on this book. His art really does look pretty without overshadowing the writing. Although I would love Marcus to have a long run on this book, I can see DC putting him on a bigger book in a few years. One thing I noticed in this issue was the coloring, and how it almost changed for different sequences. If you’ll look to the book you can see that when it is a Red Robin sequence, the book is dark and almost gritty. However when you compare this to the Tim Drake parts, they are light and bright, almost showing a difference between Tim’s personal and professional lives, which is a touch I really liked.

Right, now on to my rating, this is the end of Fabian's first arc on Red Robin, so I would not recommend picking it up as a new reader. He mentions things he set up before in previous issues, such as Tim’s to do list, however he happily does not bring up that god awful Road Home: Red Robin issue. The issue is alright to read on its own, but apart from the Bruce/Tim sequence, which you can read in the shop, as it’s the back part of the book, you have nothing you really need to see here.