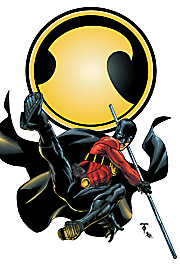 Sometimes when I read Red Robin, I always feel the need to ask, where is the fun, where is the charm from Tim Drake that I keep hearing about, and in this issue, I am given my answer. It’s in his supporting cast.

This issue opens up, where the last issue ended, sort of. Tim is in the Unternet, which is the villain’s version of the internet, that is the simplest way to describe it, a secret meeting place for baddies, almost like the Yahoo Messenger of the DC Universe.

We open the issue with an odd sequence of Tim tied up and hanging inside of a sort of Utopian Gotham with the Riddler looking at him. It is from here we are told that Tim is in the Unternet, and for some reason the Riddler is his subconscious mind trying to help him, but being the Riddler, he would only help Tim in riddles. We are then whisked off to the best double page spread I’ve seen this year, with Marcus To drawing the classic Batman and Robin team in their 1950’s outfits taking out some odd looking bad guys with a confused Red Robin looking on. I’ve got to say, this page was gorgeous to look at, the charm of it, the look, the feel, the coloring is so vibrant, I know I mention the lighthearted coloring in this book every month, but here it really stands out and makes you say “That is awesome.” We also see Tim in a strange new Red Robin costume, that I’ll get into later.

This awesome splash is followed up by some lighthearted banter between the Dynamic Duo and Red Robin, and then we are shown how Tim really sees Tam Fox, not as a hot girl who he needs to get with, but as a baby with a Bat-mask on. And no, I am not kidding, she is wearing a toddler’s bat-costume, but still speaks like Tam, and she even asks Tim “Is this way you see me,” to which he responds….by changing the subject. Awesome.

We learn that Tim is stuck in the Unternet, and Tam is there as she was in a communications-link with Tim (just go with it) and since they were linked, she got sucked into the Unternet as well. Next up we have a two page scene with the Mayor of Sinsanity as he calls it, the Joker. And who is he dressed up as? Dick Grayson’s Robin, why not. The best way to describe how he looks if you have not read this issue is to say if you have read Batman and Robin #9, and the image of the Joker as Robin in that, then it’s the same here, but that doesn’t stop it being creepy as all hell.

Next we see the original Anarky is in the Unternet as well, and takes out the Joker, and we learn that he is caught up in all of this as well….again go with it. I’m guessing the book is using Nightmare on Elm Street 3 rules here, in that, the way you see yourself in your dreams, is the way you will show up here. Anarky was in a vegetative state in the regular world, but here in the Unternet, he’s Anarky again and can walk and talk.

We follow this up with several scenes showing that this is definitely not the real world, with villains beating all the heroes and Metallo being black for some reason. Anyone willing to explain that one please comment below.

This sequence is just filling in back story about how this is not the real world and how things are different. Not interesting, but not boring either. Best way to describe it, is just saying it is there.

We next meet a Russian superhero who I’ve never heard of named Promise. She says why the Unternet exists and why something or another happens, before she is killed by Deathstroke, but not following Nightmare on Elm Street rules, because when you die here, you are just sent back to your normal body.

We follow this up by Red Star saying how he was wrong about Red Robin last issue. Seeing as he’s a reminder of the last issue, and I didn’t care about him then. I still don’t now. Nothing else happens in this scene, back to the fun stuff.

Red Robin takes on Deathstroke, and Tam realizes she can control her look in this world, so she turns into…Pam Grier. Somehow I think this is both the dumbest thing ever, and yet is also awesome. She proceeds to kick butt foxy style, and it is awesome.

Tim then realizes he’ll need help to beat the villains so he brings in the Teen Titans, but as adults. You have Connor as Superman, Stephanie Brown as Batwoman, but in a Batman style costume, Kid Flash as the actual Flash (Why would he need a costume change, considering he was the Flash for a little while, and already had a costume?) Amongst others.

The issue comes to an end with Anarky saying he’d like to control the Unternet, and Tim realizing he has no choice but to let him. Hopefully this gets brought up again down the line, and not just fobbed off like the Lynx thing has been. Finally the issue ends with a teaser of a Victor Mikalek/Catman team up, and the Teen Titans/Red Robin Crossover coming next month.

First things first, what an issue! The art was great as always, but was actually above To’s usual awesome standard, the writing was solid for most of the time and conveyed fun, so all in all, a great issue.

There is nothing more I can really say about this issue. Top notch work, and I can’t justify giving it five stars considering I don’t care about the ending of the issue, or the Russia parts, but for everything else, I feel this score is fair: