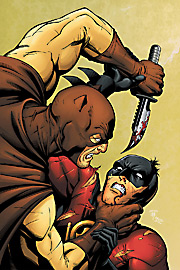 A day late, and a dollar short, I bring to you, faithful TBU editorial readers my latest Red Robin review. Now before we begin, I would like to say this is another crossover, so let’s get my crossover issues out the way before I start, as if you haven’t read my Secret Six #30 review from a couple of weeks ago, this will be new. If you have read it, then enjoy me moaning about it again.

I hate crossovers, but I love crossovers when they are done right. Let me explain, when I reviewed an issue of Batgirl that featured Red Robin, I raved about how the writing was great, the story was fun, and everything apart from the art was great. Then I got to the Red Robin part of the crossover, and hated it. It did not feel like the same scene, characters sounded different, and everything was just off. I hate crossovers when it feels like the writers are not collaborating, if a comic is guest starring a particular character who another writer is using quite well, and you are doing a crossover, then just put co-credits on each book and work together. I am sick and tired of seeing characters written one way in one part of a crossover, only to be written another way in the next part.

Right, rant over, time to go onto the issue:

We start with the cover that is of Catman about to stab Red Robin with a bloody knife. This would be a great cover, except for one problem, why wouldn’t Catman just use his claw blade things instead of a knife? Anyway, the cover says this is Red Robin with Teen Titans, bland background, ok cover, let us move on.

We get a page recap of the story so far, which is the Calculator’s evil Unternet has been taken over by the original Anarky, and Calculator sends out Catman to take care of Red Robin and the problem. Catman carries the same knife in the book that he had in the cover, so I guess I can praise the book for consistency.

What follows is a page long running, chase, fight scene which is a lot more interesting than I make it sound. We have about four pages of a chase between Catman and Red Robin before Catman reveals that he was just a distraction for Tim. Tim tries to call in Batgirl's help, but she says she’s busy with the extras from Batman Inc. so he’ll need to look elsewhere. Tim realizes he needs some outside help so he calls in some old friends. The Teen Titans, whoopity fricking doo. I’ve read a couple of issues of the new Teen Titans under JT Krul, and the stories haven’t been good, the only person on the team who works is Damian, so why should I care if he wants their help. Because he’s all grown up, and it’s time to go see his friends.

What follows is stupid, the plan is that Damian will go out and find the Calculator and capture him, as he doesn’t know what Damian looks like, it should be easy for him to go in, in disguise. Damian goes to grab Calculator, only he blows up, Calculator that is, and the issue ends with the team realizing they are surrounded by suicide bomber versions of the calculator.

Now, I know I try and do long recaps these days, but really I couldn’t. This issue was dull. Bad crossovers annoy me, and when I first read this, I’d just finished that Secret Six issue, and I thought going back later I would fine more to enjoy about this book. And frankly, I couldn’t find anything. It’s like most mid-series crossovers by two different writers I’ve read. They have a cliff-hanger, which Writer A sets up, and Writer B will just ignore it to show how awesome his characters are, while also writing a dull version of Writer A’s character.

Art here was alright, but not great. I’ve come to expect a lot from Marcus To these days, and this just wasn’t doing it for me. I’m going to pick up, and probably review the second part of this crossover, but really you have to ask yourself, do I really want to read a comic where absolutely nothing interesting happens, we get Red Robin battling, at best a C-list villain, and a story that Nicieza could probably write in his sleep. Was this comic worth your £2.35, or $2.99? No.

Will this be a good crossover, I can’t say, but the storyline in Red Robin hasn’t been that great, apart from the Unternet issue, and I just can’t care about anything going on. One thing is for damn sure; I love Damian as Robin and as a member of the Teen Titans.