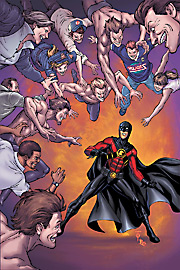 Last month, I thought that was the end of it. I thought this is it, the end of this stupid Unternet storyline that has been bogging down Red Robin and bringing it to Chris Yost levels of boredom for me. And then, I open this month’s issue to find the storyline is not over, and Tim still has to deal with issues in the Unternet. Well, whoopity dee, it’s time for more fun with Red Robin #21.

As usual we open with the cover of Red Robin looking like he is about to be mauled by a bunch of weird college students, as he looks concerned and the tag of the issue “Mad World” is shown. Something about this cover just screams “Don’t bother!” to me. I don’t know what it is about it, it just isn’t something that I would when passing in a shop go over to and say “Wow! Look at that cover, I wonder what happens in the issue!”

We are then given a brief synopsis of the users of the Unternet this issue, in the form of the Mad Men, who were created by the same Apokolips scientists who try to drive Batman mad in RIP and Final Crisis, and also that they used to be Blue Beetle Ted Kord enemies. Nothing really interesting going on, but at least I know who the villains are supposed to be now.

We follow this up with a splash page of Red Robin fighting these Joker wannabes as unfunny dialogue is read out “We want to see the manager!” and such.

We follow this uninteresting fight for several pages, before we come to Tim going into his RedWing Unternet identity, which has said before, is a mix of his Red Robin costume, and also a Nightwing costume. So, I christen it RedWing.

We are then given a big old school villain fight with the Mad Men dressing up as their versions of Solomon Grundy, Battle Armoured Lex Luthor and Sinestro. It is not bad to look at, but at the same time, you have to ask yourself, why should I care about these guys.

The original Anarky, who is left in a comatose state in the real world shows up to help RedWing out and they both fight the mad men for several pretty dull and lifeless pages. Tim follows this up by taking down the madmen and the original Anarky comes away from the story coming out of the ashes of what was once the Unternet.

Please people who create Red Robin, stop writing this awful, awful storyline. It is in no way as interesting as you so clearly think it is Fabian, and frankly, I am getting tired of looking at the book and having this storyline, which seems to have had seventeen conclusions, only for the storyline to continue. Yes, I understand this is Tim’s role in Batman Inc., but here’s an idea, how about he actually work towards taking down some actual bad guys, and actually doing something that isn’t dull.

Art as always by Marcus To is acceptable, but with this story, I was not my usual self when looking at the art and saying how nice it looks. I was more pressed at counting down how many pages were left until this comic was done.

I’ve been saying for months that this entire storyline is missable, and frankly, this “Conclusion” is more of the same. If you have been reading Red Robin, then nothing I say will stop you from picking up this comic, and if you haven’t, this is clearly not a good place to start.