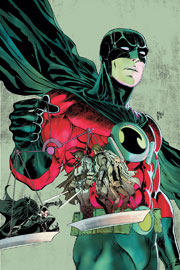 Before I start this review, I best say something very important. I don’t like Azrael. I’ve read Knightfall, all three volumes of that story, and the story itself, to give it a short review, it was a bit crap. This is probably going to get some people saying “You can’t hate Knightfall! The Dark Knight Rises is going to be based on that!!” I respond to these comments thusly “Sploosh!” When was the last time you read Knightfall? It was a garbage storyline, that has a gigantic cluster of stupidity for an ending that I just couldn’t care less about, and the so called main villain, Bane, was just a set up for something bigger, which meant absolutely nothing in the long run of Batman comics.

But that has nothing to do with this current issue of Red Robin, which deals with the new Azrael! Who had his own series for about fifteen issues, before it was canceled, and quite honestly, nobody really cared about. However, there is a bright note when I read this issue; Nicieza is taking a break from the god awful Unternet storyline! The bad news is Marcus To is also taking a break and fill in artist Freddie Williams II is doing this issue.

I’ve read about the last dozen or so issues of the original Robin series with Tim Drake by Freddie Williams, so hopefully, that will be enough of a tease to get you reading on about my thoughts about his art in this issue compared to his stuff from the original series.

So, enough of this rambling introduction, let’s just sum up and then start the comic:

Red Robin has sucked ever since this Unternet storyline began.

We open with the cover, drawn by Guillem March; the image shown is a set of scales with Dick Grayson Batman, and Selina Kyle Catwoman on one side, and Azrael, an Azrael lookalike and some bald guy on the other. This cover is alright, but it doesn’t stand out either. If you were in a comic shop, and you walked past this comic, you’d likely not notice it, as it fades into the background quite well.

The story of the issue is Tim dealing with the crazed Azrael, and at the same time dealing with his own faith issues, as Azrael believes he is a descendant of Jesus Christ. Tim’s mission is to save the Mayor, who Azrael, and his crazed helper known as The Crusader watches, however while Tim has to save the Mayor, he also has to deal with the city going mad, and explosions happening all over the place, and cars hanging in the air in the middle of crowded streets. Tim has to make his way to the house where the Mayor is being kept, while also facing the challenges of The Crusader, all the while Tim has to question his faith. Tim handles these challenges well, as they are, at the end of the day, generic superhero problems, like finding out where the villain is hiding and helping the helpless caught up in the turmoil of Azrael’s torment of the city.

When Tim reaches Azrael he is stabbed with the flame sword that Azrael carries as a sign of faith, if the sword kills Tim, he is unworthy. I have never read, nor plan to read the current Azrael series, so this whole “Shocking” moment of the sword plunging through Tim was lost on me. I wasn’t so much concerned for Tim’s well-being as I was wondering how many pages of the comic where left. The answer was four.

The Crusader comes into the house, and calls bull on the situation, and claims Tim is unclean and unworthy, which Tim readily agrees to saying he had to protect the citizens of Gotham. Azrael says that thanks to Tim, Gotham is now going to die. We end the comic with Ra’s Al Ghul telling the White Ghost that Tim has failed and that Gotham will die at dawn, as the issue ends with “Next part in Gotham City Sirens!”

Can I just say, this was a chore of an issue to get through? I know I said already I don’t care about Azrael, but just who is the Crusader? Why am I supposed to care about the city burning down, when it comes out of nowhere, considering the last issue of Red Robin has Tim dealing with issues with the Unternet, so this came out of left field. I don’t know how the city came to be on fire, and why Azrael has gone mad, and although the issue does give some background, it is not enough to make me feel like I wasn’t being dropped into the deep end of a stupid crossover.

The art by Freddie Williams ranges from alright, to just terrible. His opening page of Tim talking about losing his faith is chilling, and great, but his two page splash following of Red Robin in a Spider-Man 3 pose, is just so out of place. As I said before, I enjoyed Williams’s art on the original Robin series and expected to see some of the same great art we got there here, sadly I was disappointed. It seemed like somewhere between Robin, JSA: All Stars and this fill in issue of Red Robin Freddie Williams II lost his way, and lost the ability to draw anything really above average.

The writing in this comic has really stooped so low these past four months, that this issue shouldn’t really have come as a surprise, the writing is generic, and at no point was any reason given as to why anyone should care about Azrael or this crossover. It is just so worthless and phoned in, I have to ask, what was the point of this comic?

I’ve said avoid the last few issues of Red Robin as the Unternet storyline has been terrible, and I’m going to say the same about this issue. It is a generic fill in storyline, that you have no reason to read or care about and for that reason, I’m giving it the score it so richly deserves: