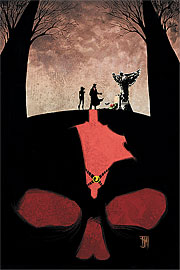 The issue opens with Tim as Red Robin going through a museum in Berlin with Red Robin looking for some artifact while having a chat with Ra’s al Ghul, who Tim is now in an unlikely partnership with to find out what really happened to Bruce Wayne. We then cut to Wayne Tower in Moscow with the daughter of Lucius Fox being told to look for Tim Wayne for reasons that are never truly explained. We cut back to the present and Tim and his new allies, the league of assasins taking on the museum security and a German "Maxi Zeus" called the Wild Huntsmen. This part of the story ends with Red Robin finding out Ra’s sent the assassins to help with the mission and to kill people who get in the way. When Red Robin finds this out, he screams at Ra’s to call off his soldiers who are then disappear leaving Tim to clean up the mess. While this is going on we get a flashback of what happened a few days after the events of battle for the cowl and Tim visiting Bruce’s grave, with Tim repeating that he is now alone, only to be told he’s not by Wonder Girl. Cassie tells Tim that she is there for him if he ever needs anyone. Tim begins to open up to her about the problems he’s faced such as Anarky as Robin, causing the death of Anarky's family, letting Jason Todd loose to go on his Batman fueled killing spree and being taken over by Darkseid during the events of Final Crisis. Cassie tells Tim that she’s here for him, to whom Tim lets her in on his secret “Batman is alive.” When Cassie tries to talk sense into him, Tim says goodbye to her and walks off. Cassie starts to cry and calls the only person she thinks can get through to Tim, that person being Dick Grayson.

This is another solid issue from Chris Yost, though it doesn’t advance the story as much as the first two issues, it does move it along and makes for an interesting issue, the scene between Cassie, Wonder Girl and Tim is almost heartbreaking. The story as a whole flies back and forth at a good speed, and leaves you wondering where you will end up next, Tim’s past before he becomes Red Robin, The Fox’s looking for Tim Wayne around the world, and Tim and Ra’s al Ghul trying to find the truth behind Bruce’s apparent death, it feels like a film and is never boring to read.

The art again, like the last two issues is solid, it is nothing that you would go out and pick up this comic for on its own, but it is solid art for the comic. In previous reviews I complained about Tim looking like he was fourteen years old and this will be no different, Tim looks way too young here, and compared to when he is Red Robin and is really one of the few problems I have with the art here.

So all in all, it’s an ok issue, but not something I would tell people who have never read comics to go out and read. I would say if you are looking for a good comic to read and you do like Tim Drake, Wayne whatever he wants to be known as this week, and then you can do a lot worse than read Red Robin issue #3.