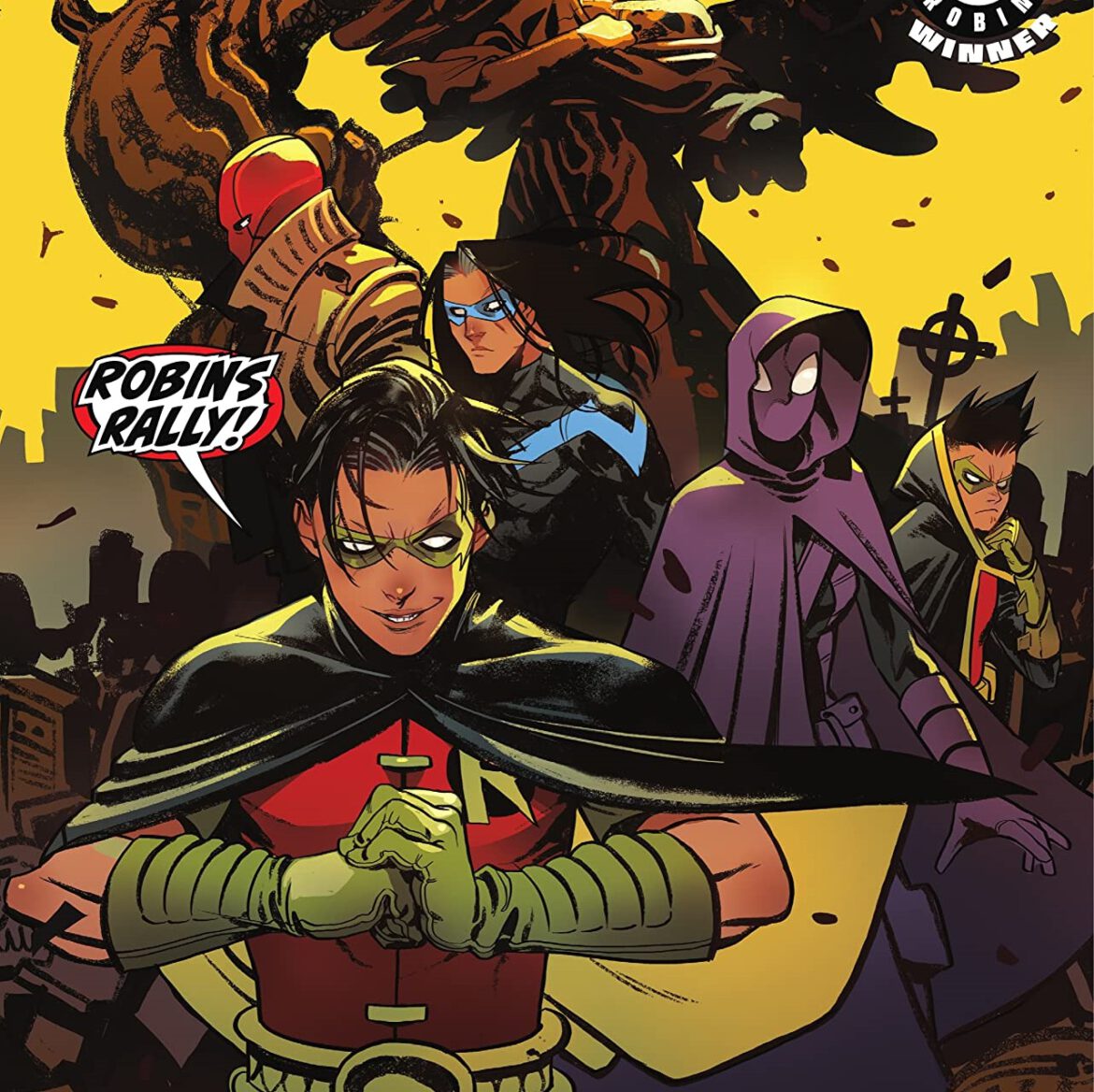 Overview: In Robins #2, the Robins all face a Gauntlet in their past and present – but there may be more history than they know!

Synopsis (spoilers ahead): Robins #2 begins as Red Robin (Tim Drake) sums up the situation – the murder of Lou Delcaine, gang member of Boss Minette, as he, Robin (Damian Wayne), and Red Hood (Jason Todd) visit Batman in the Batcave. Bruce tells them that his network was breached and forbids them from investigating while he secures his Justice League secrets – to which Nightwing (Dick Grayson), arriving down the Bat-pole, promises they will – lying through his teeth as Batman teleports away. Dick leads them to the Spoilermobile (Stephanie Brown’s van).

The mysterious woman claiming to be the First Robin gives instructions to a gang of pathetic-looking henchmen over a video call, then sits down to read all five Gauntlet files of the Robins’ first cases.

In Steph’s van (because they won’t fit on her motorcycle), Dick explains that he lied to Batman because the Robins need to keep him from darkness.

Dick’s Gauntlet: Batman evaluates his test hiding from him, but also witnessing a crime, collecting evidence, and dismantling a gang – grading him a passing grade.

Dick reveals a clue he got from Delcaine’s pocket, and Jason deciphers the reference to “steamer bier” – a stolen hearse.

Jason’s Gauntlet: pursuing the ambassador’s son, Felipe Garzonas, a rapist who drove a girl to suicide, then fell to his death as Jason confronted him – Batman passes him.

In the cemetery Jason directs them, Tim asks Steph what’s bothering her (revealing that they are in the “broken up” phase of their relationship), and she says she’s bothered by the girl she tried to persuade to help them in the fight against the Devotees of Anarky, who was radicalized by Mr. Neg, the leader.

Tim’s Gauntlet: the kidnapping of his parents by the Obeah Man, the murder of his mother, and his rescue of Batman from Scarecrow – another passing grade.

Steph continues thinking about the Anarky girl, but is nearly taken out by a trap, rescued by Damian, who scorns her as not a “Real Robin.”

Steph’s Gauntlet: while fighting Scarab, who is killing boys she thinks might be Robin, Steph disobeys orders to save Batman’s life, but Batman judges she’s too motivated by revenge, and fails her.

Outside the criminal funeral building, Tim uses his tech to see Scarab, the Ambassador, and the Obeah Man tied to chairs, and reveals to Steph that Damian’s Gauntlet was Tim himself.

When Damian attacked Tim in Batman and Son, Batman judged that his refusal to kill Tim was either mercy or a tactic to infiltrate Batman’s family, leaving a grade of “Incomplete” – and a surprise file for “Gauntlet Zero.”

The Robins notice the gang of henchmen (seen by the readers earlier), and recognize Giggles and Guffaw (Joker henchmen), Kitten, Chick, and Honeysuckle – the “Junior Supercriminals” – truly awful sidekicks. Wielding a sword, Jason chases after Giggles and Guffaw, but they transform into Jokerized versions of themselves!

Analysis: Tim Seeley’s second chapter found in Robins #2 once again jumps straight into controversy with the revelation that the famous “Gauntlet” that Dick Grayson went through had a parallel for all five Robins – and muddies the timeline that is known about each Robin’s career by claiming it was the “first case” for each one. I think if Seeley had chosen a more ambiguous way of stating his “gauntlets” – “first major case” or “first major solo case” or even just “first test,” he wouldn’t have gotten hit with so many criticisms on Twitter. As it is, after listening to the process Seeley describes in constructing this series – where he spent weeks reading everything he could about all five Robins, then attempted to synthesize and crystallize each of them in a way that provided a uniform training sequence or curriculum that Bruce devised – I think the way he constructed the Gauntlets has merit, but I also understand why people who have studied the history of their favorite Robin and know the timeline like the back of their hand would feel that such a compression and crystallized approach doesn’t fit correctly. Additionally, some elements, like Steph’s firing, seem unfinished, and in need of more exploration – and given this is only the second of six issues, there’s plenty of time and room for that.

Nonetheless, I think it’s providing a story that gives each Robin things to do, introduces a lot of important emotional history to new readers and old, and pushes our story forward nicely. Baldemar Rivas, though still sometimes a bit unpolished feeling, provides pencils that are full of energy and personality for each Robin and the pathetic henchmen they face, and Romulo Fajardo Jr. gives the book a bright and professional glow, with beautifully handled sepia-tinted flashbacks for each Gauntlet. All in all, the books continue to provide what you expect with a Tim Seeley comic – professional, slick writing, with art that matches the tone of the book, and a story that intrigues and entertains.

Baldemar Rivas provides another Five Robins cover, with Tim taking center stage calling “Robins Rally,” this time in a graveyard instead of leaping over a shining city. Nick Robles provides our sweaty Jason Todd workout cover for Robins #2, highlighting his white streak of hair, also including his autopsy scar and many other details showing Robles (or the editorial providing the brief for the piece) is keen to give fans a worthwhile variant.

Seeley and Rivas provide an intricately constructed and emotionally difficult second issue in this exciting series!